There is something about Serbia.

I really can’t put my finger on it but sadly most of my knowledge and understanding of the country comes from the 90s, during the wars in the Balkans. I was young then and my memory of it these days is hazy but watching the news you learned that the Serbians were the aggressors in the war. The enemies. We may not have understood the reasons or the history behind the war, but that was what was made clear to us. And so that is what probably clouds most westerners opinions of Serbia and the Serbian people.

Of all the places in the Balkans I was most nervous about going here. Were the people nice? Would they treat me well being a foreigner, an American? What was the racism in this country? You hear so many different opinions from people, those from neighboring countries, those who visited years ago, and those strangely who have never been yet still seem obliged to share their opinion.

In the end you are always afraid of what you don’t know. But in reality you need to go see it yourself to really know for sure.

On the way from the airport I grabbed the first taxi available. Already pronouncing my destination incorrectly he laughed and I laughed knowing that getting around probably was going to be tough for me. Especially since I can’t read Cyrillic and my knowledge of Serbian is umm…non-existent. He told me a little about Belgrade, history, life there. We chatted about my travels from Turkey.

So where are you from? –  he inquired

Oh so you are American? – he asked rhetorically

He then launched into a bit of a tirade about American and its role in the Balkans and the war. Shared some very nationalistic beliefs on Kosovo and the war and American aggression. I could agree with some and disagree with others but I don’t think my opinion really mattered. But this definitely made me think that perhaps my time in Serbia would be a bit more hostile than I had hoped for.

Thankfully though it was anything but.

Belgrade itself is a beautiful city. It doesn’t have very many “big” sites but the sites it does have are lovely from the Citadel to large orthodox churches and more.

There are lots of areas though that many folks there told me were not so beautiful, from buildings falling down to old communist housing blocks, but even within them there was a lot of beauty if you looked for it.

I recall my friend taking me to a restaurant, the building itself looked like it was probably abandoned and it certainly appeared that it was not well maintained. You almost wonder if they took a wrong turn somewhere, or if it was some literal hole-in-the-wall type establishment.

But inside, the place was incredible. Peering through the window I could see an immaculate and well stocked kitchen and well thought out dining areas. In the back was a lovely garden which certainly didn’t reflect the area that it was in. More of an oasis than anything else. And that is what I loved most about Belgrade. The ability to always surprise. Sure things didn’t always on the surface look lovely, but it was one of the loveliest cities I have visited and one of my new favorites.

Overall though the city was really nice and less touristy than most of the other cities throughout Europe. Even less touristy than some of the other Balkan countries which lately have seen a resurgence in tourism as more and more people start coming through. Try going to parts of Croatia now for instance and you’ll wonder how much of the city is tourist and how much is local. In Belgrade though it seemed far more local than anything else.

It makes me think that many people in the end are missing out on a gem of a city to visit.

The food in Serbia (particularly Belgrade) was a interesting mix of traditional and modern Balkan cuisine. Many of the things I have already had in various forms from different Balkan countries or Turkey itself as well. I do find much of the food really quite good, particularly the various salads and meat dishes. I always tell people back home how much I love cevapi for instance and wish I could fine Börek or other dishes in various other countries as well.

Actually I did discover that one of the restaurants we visited Anbar has another branch in Washington DC! That was a shock as DC was where I moved from and never heard of the place. The food though was a bit more modern take on Serbian and Balkan cuisine and it was quite good. Expensive for Belgrade but overall rather affordable for Western tourists visiting the city.

And of course I don’t want to ignore the more traditional cuisine such as the cevapi that I always tend to miss while I’m traveling. The one I had though was a bit saltier than I recall but still good. Definitely better eating than I had been doing on some of my other travels recently.

And of course one of my favorite locations were the wonderful Green Markets that seem to populate several locations around the city. My friend was a bit surprised with how much I ended up buying, but with the availability of affordable and cheap fruits and vegetables it was hard not to do quite a bit of shopping.

One of the lessons to be learned though is to not shop on an empty stomach!

One of the things I love most about travel are meeting people along the way. I was worried about people knowing I was American here, especially after a few initial encounters and of course after the history of the recent wars and the US involvement there. There is definitely a nationalistic tone and a pride in country but overall people were really able to connect one on one with you and were surprisingly warm and friendly. 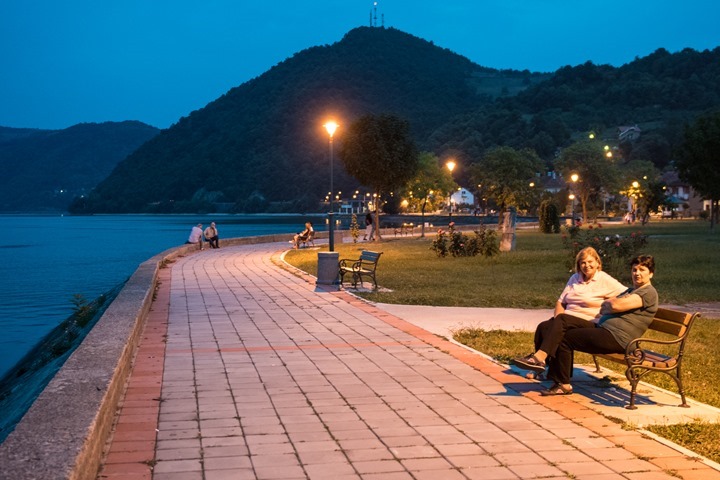 I have traveled through other countries in the nearby region and generally found in several of them that people kept very much to themselves. Here though people were far more willing and wanting to engage and talk with you. I got pulled into a dance with some ladies at a festival for instance something that in very few other places would have occurred.

One of the evenings we were at a restaurant in the old city with my friend and some of her friends. Their young daughter was there and she was the center of attention with the staff at the restaurant as well. They treated her so well and even brought her in the back to the kitchen to make some bread. The friends who also hailed from Switzerland remarked on how such actions would be so completely foreign in Switzerland and how people wouldn’t engage in the same way as they do here in Belgrade. Something that they all enjoyed. There was more interaction in the life with strangers here than they were used to back in other Western countries. I know for sure that in the US many of the interactions I saw, particularly in a large city would have made me uncomfortable wondering what the person’s motivations may be. But here they seemed all but normal.

The one thing I sadly did not have enough time to do was to explore more of the country outside of Belgrade. My main objective of going to Serbia was to visit with my friend so my schedule of traveling outside of town revolved a bit more around her schedule as well.

We did spend a few days taking a drive around to explore some of the other areas. I would have loved to gone more to the mountains as well but there was not enough time for it. But some of the areas, particularly along the Danube were incredibly beautiful.

There were also some wonderful discoveries to be had along the Danube as well including the incredible Archaeological site of Lepenski Vir. I was amazed at the history of this place, one of the oldest known settlements in history and likely the oldest in Europe as well. You tend to forget how long people have been living in these areas, particularly along waterways such as the Danube. Taking a step back 9000 years was one of the highlights of my travels in Serbia.

There is a lot more to write on my time in Serbia and certainly a lot more than just a first impression. I hope to try to explore more of my time there through a few other posts on things such as architecture (particularly that of the old socialist architecture) and a few of the places that I visited.

Certainly though my time in Serbia was well spent and definitely changed my impressions on a lot of what Serbia is and isn’t. It showed me that only through travel can you really get to know whether a place matches what your impression of it is (particularly those that were developed decades ago).

Overall though I found that I fell in love with the Belgrade and the country of Serbia. I have thoughts and hopeful plans to get back again soon and explore more of the country. Here’s hoping.

When one thinks about Saudi Arabia, there are many things that come to … END_OF_DOCUMENT_TOKEN_TO_BE_REPLACED

The Maroon Bells Hike is the literal postcard of the State of Colorado. … END_OF_DOCUMENT_TOKEN_TO_BE_REPLACED

There are quite a few Fossil related National Monument Sites. Located in … END_OF_DOCUMENT_TOKEN_TO_BE_REPLACED