I have always liked Jeddah, a port city on the Red Sea in present day Saudi Arabia. Jeddah has been a city welcoming pilgrims, travelers, and business people for centuries across various empires that have come through this area. Famously Jeddah is the entry point for most of the pilgrims who come for the Hajj (as well as Umrah) and for it the city has developed around accommodating foreign visitors for much of its storied history. Although over more recent years Jeddah has become a huge business hub and the city has exploded beyond its traditional borders. However still it has been able to maintain some of its old history in the small yet interesting old city.  So wanted to share a photo exploration of the old city and some of its areas. 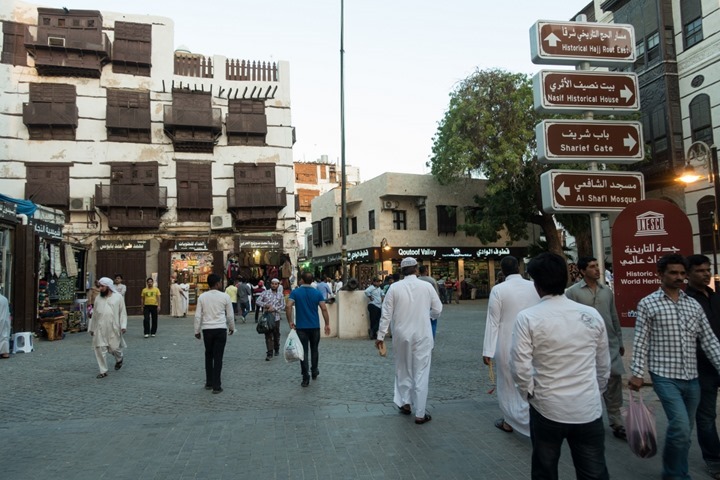 You can see though from this photo and the one below the traditional design of the buildings. Those brown sections on the buildings allowed airflow into the buildings but also allowed the women of the house to look out onto the street without being seen themselves. Such developments for very conservative areas of the world. However one should be reminded that traditionally Jeddah was more liberal than some of the other areas of present day Saudi such as Riyadh which was located far more into the interior. Large numbers of foreigners played a huge role into the development of the culture of Jeddah as well. 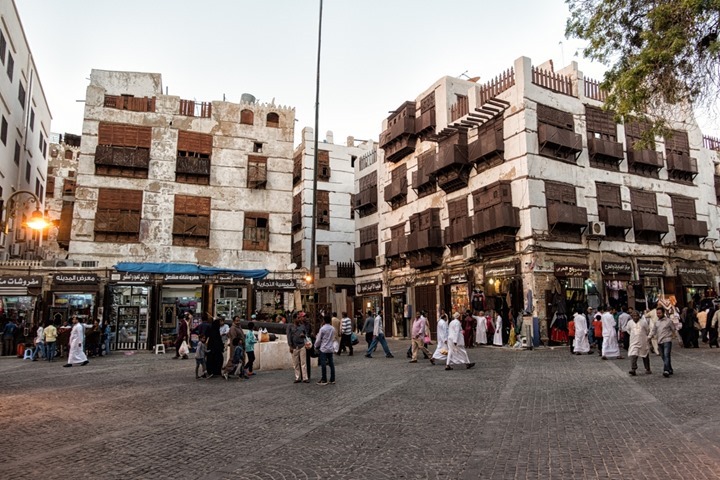 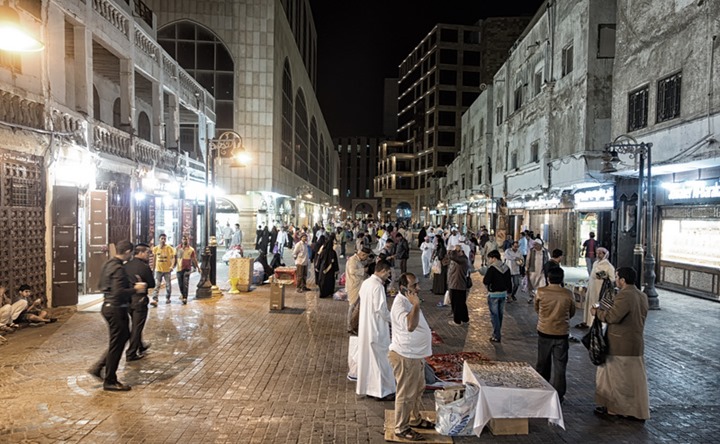 Markets are one of my favorite parts of the city. I love watching the heart of commerce and the ebb and flow and goods and people. Market photos are also among my favorite to view and to take. There seemed to be far fewer tourists in these cities than would be in comparable cities around the world. This was nice actually to view the area as people living in it instead of simply those just gawking and photographing it. Given that I was one of the few folks who were about taking photos and thankfully most people ignored me allowing me to take more candid photographs. 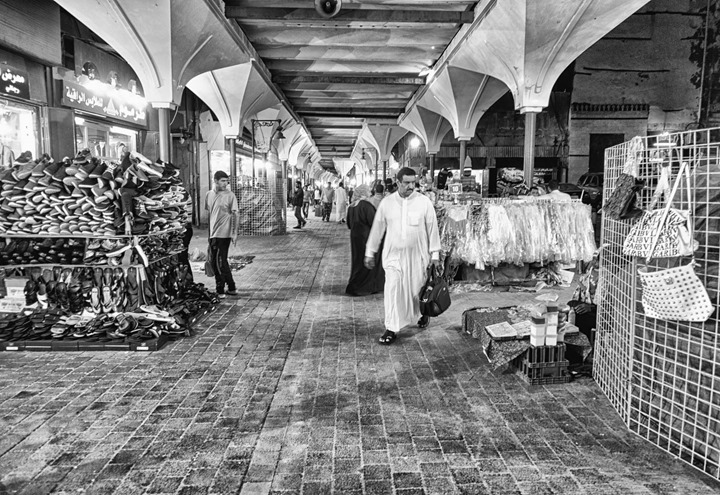 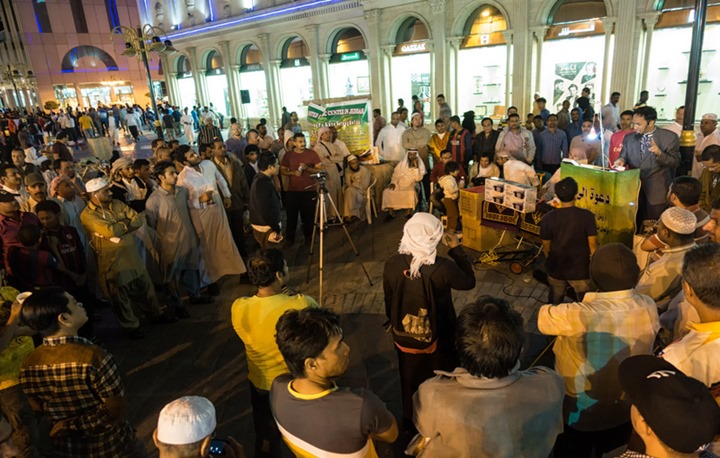 I noticed a crowd gathering around an impassioned speaker in the center of the market. It seemed though that this Filipino speaker was preaching Islam and trying to convert other foreign passersby. Actually it seemed there was a member of the public who was taking the Shahada (profession of faith) while we were standing there. Actually it seemed as well that if you did convert perhaps that they even offered you a gift, which seemed to be the stack of boxes that sat to the side of the preacher. 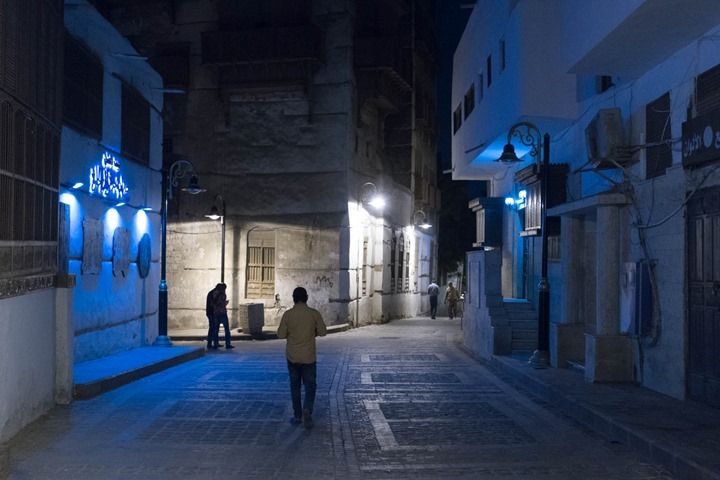 Much of the old city is rather lightly visited. There were just a handful of people wandering its old streets. Various buildings on either side in various states of collapse and restoration. 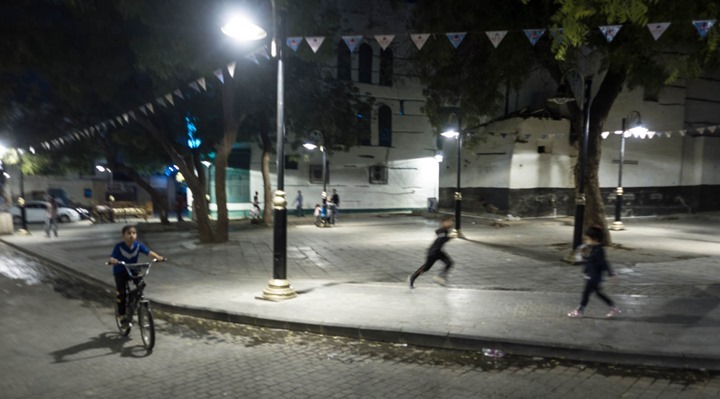 There though a lot of children playing in the areas around us. Even late into the evening you would see kids running about. The evenings in many senses are when the city comes alive due to really high temperatures during much of the year.. 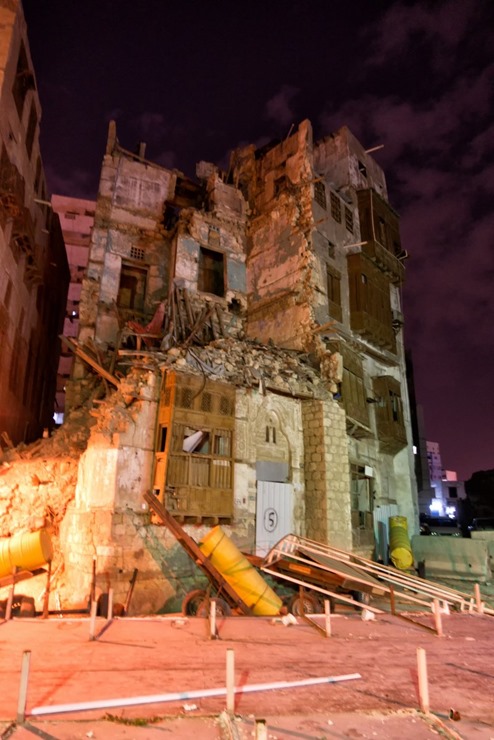 Sadly some of the buildings are not as well maintained as some of the others. Actually quite a few of the buildings are in a state of disrepair with them too dangerous to get close to. This was one of those such buildings. It looked like it was such as beautiful home many years ago but now people need to stand clear for fear of things falling on them. One can hope that they will repair and restore these buildings in the near future. 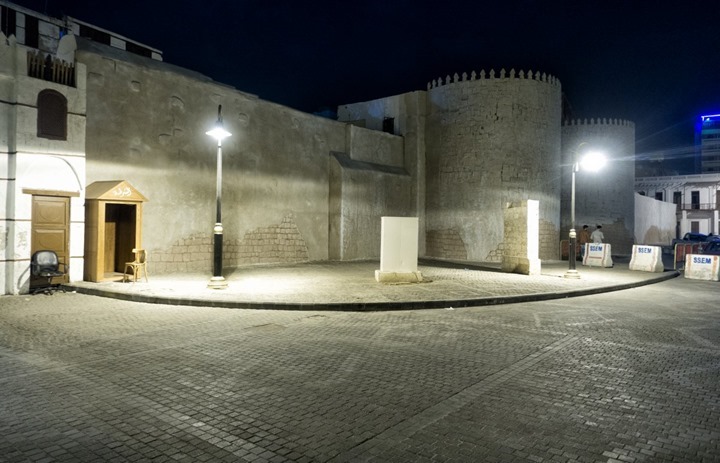 The one thing that I enjoyed about the area was the walls around the old city. These have clearly been restored but they were amazing to think of the city being a walled city so many centuries ago. You really don’t get that feeling being anywhere else in Jeddah actually. It is a strange feeling actually realizing the age of the old city compared to the more contemporary city that surrounds it. 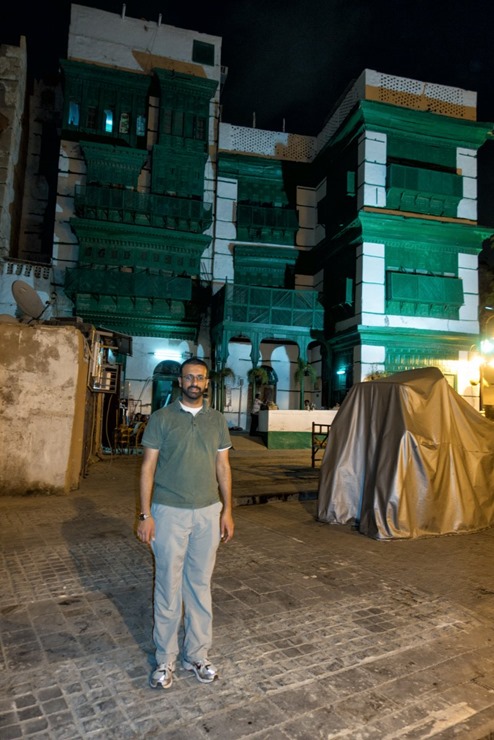 Some of the buildings have definitely been restored as can be seen by the one behind me in this photo. It looks amazing actually with the bright green and white exterior. You wonder though if they have plans to either move folks back into the old city or use these buildings for commercial purposes. I’m excited to hopefully get the chance to visit again in future years after the country invests more into tourism and works to restore and revitalize these areas.

Small white town. Or at least that is the meaning of the name when you … END_OF_DOCUMENT_TOKEN_TO_BE_REPLACED

Capital cities in many countries often get a bad rap. Especially those in … END_OF_DOCUMENT_TOKEN_TO_BE_REPLACED

The Jewel of New England, Acadia National Park offers some of the most … END_OF_DOCUMENT_TOKEN_TO_BE_REPLACED