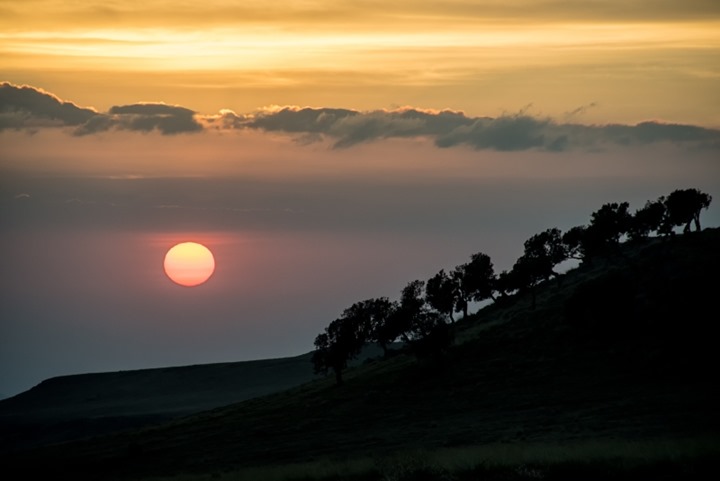 I really did not even know such a place existed in Ethiopia.

It was hard for me to realize how little I actually knew about Ethiopia prior to actually visiting there. Well basically nothing other than those news stories about the droughts and famines decades ago.

So when I heard about the Simiens I really did not know what to expect.

Nicknamed the “roof of Africa” the Simien mountains are both a National Park and a UNESCO World Heritage Site. And it is said to have some of the most stunning views in Ethiopia if not among the best anywhere in Africa. Certainly when you gaze out from the cliffs you can certainly understand why.  The park itself was founded in 1969 by Clive Nicol a Welsh-Japanese writer who lives in Japan and later became a UNESCO site in 1978 (one of the first sites to be given this distinction). 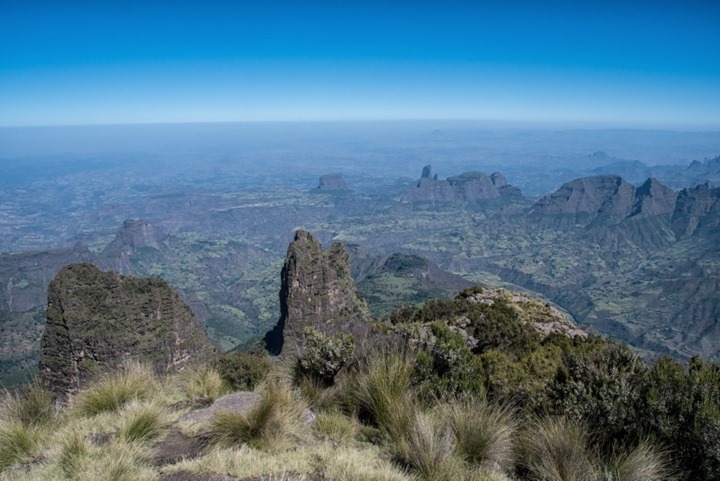 Our original intention was to come for a day or two on a few short day hikes from a nearby “boutique” lodge. However as luck would have it another traveler we encountered had convinced us to join him on a four day trek through the mountains. Even with the difficulties (from being scammed by our tour operator, not having the right equipment, the cold nights I was also unprepared for) it was certainly one of the highlights of my time in Ethiopia and something I’m really glad to have had to chance to visit this remarkable place. Additionally while I’d love to come back here with some proper gear and do more of the park I don’t know if or when I’ll find myself in Ethiopia again so I’m glad to have not missed this chance.

After seeing the hippo in Lake Tana I was really excited to see as much wildlife as I could while traveling through Ethiopia. The Simiens has quite a large swath of wildlife from Ethiopian Wolves, Walia Ibex, Gelada Baboons, Antelopes, various bird species, etc. We of course sadly did not get to see all of them but we did get to view quite a few actually.  I did not successfully get a photo of an Ethiopian Wolf or Walia Ibex given their distances from where we were. Did not see a Leopard (they are more in the lowlands I believe). Clearly one of the easiest to see and most distinct of the creatures of the Simiens. These tend to travel in large family groups and we saw quite a few throughout various areas we hiked. They are also called “bleeding heart” baboons for their red-patch on their chests. These are obviously different than other baboons such as the Hamadryas Baboons which tend to have a bright red ass (I saw many of these in Southern Saudi Arabia). 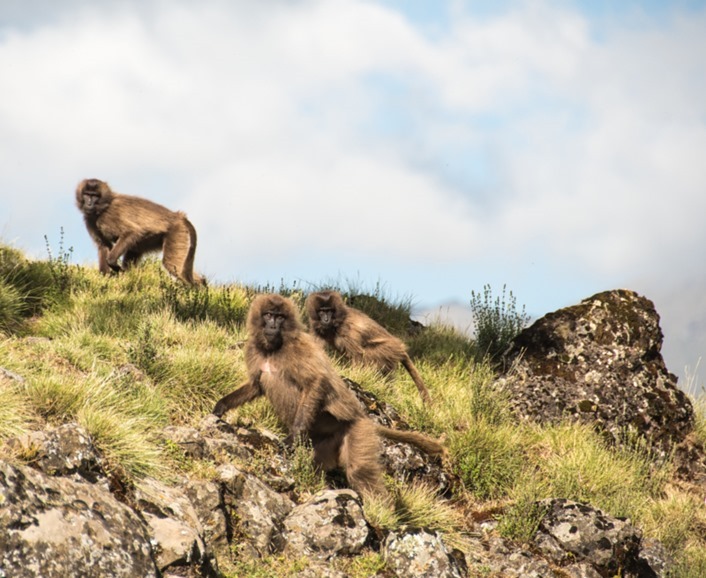 There are various other monkey species traveling around as well. Sadly I did not get the chance to identify which ones all of them were. And even the ones in the above photo I’m still researching to figure out which one it is. 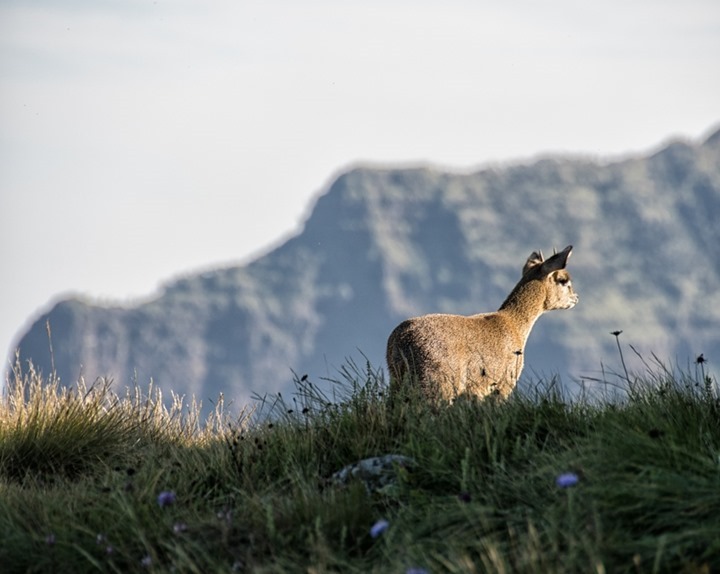 These beautiful tiny little antelopes could be seen foraging and running along the cliffs and rocks of the park. They were notoriously difficult for me to photograph as they would always keep their back to me (for a quick sprint in the other direction) and stay just far enough away to be alerted if I moved closer. I tried sneaking closer to get better shots but they would often just bound away. 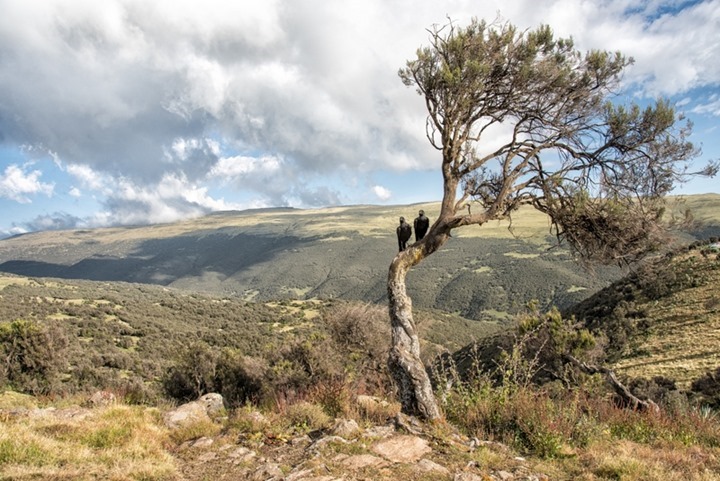 These guys were everywhere and we had to constantly watch our stuff to keep it protected from these guys. At one of my friend left a sandwich that was wrapped in aluminum foil on the table and the raven picked up the entire packet and flew off. They were very loud and very ubiquitous. The above photo is of a pair who were keeping an eye on us at our campsite in Geech. 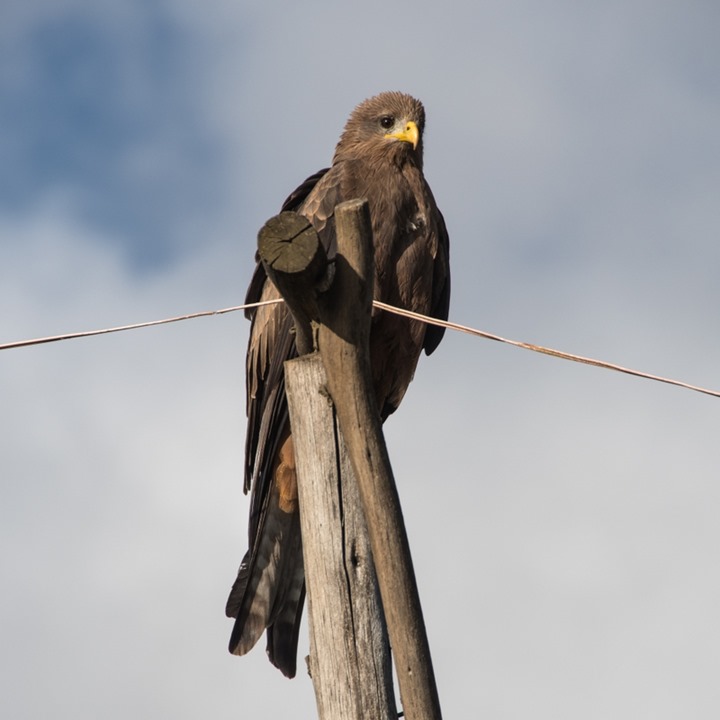 There are over 100 different types of birds in the Simiens. I’m not an ornithologist so I’m the wrong person to identify them but we saw quite a few amazing different species on various parts of the hike. I wish I could have had time to go and document more of them (and with better birding photography equipment). This was a type of bird of prey although I’ve been trying to identify which one! 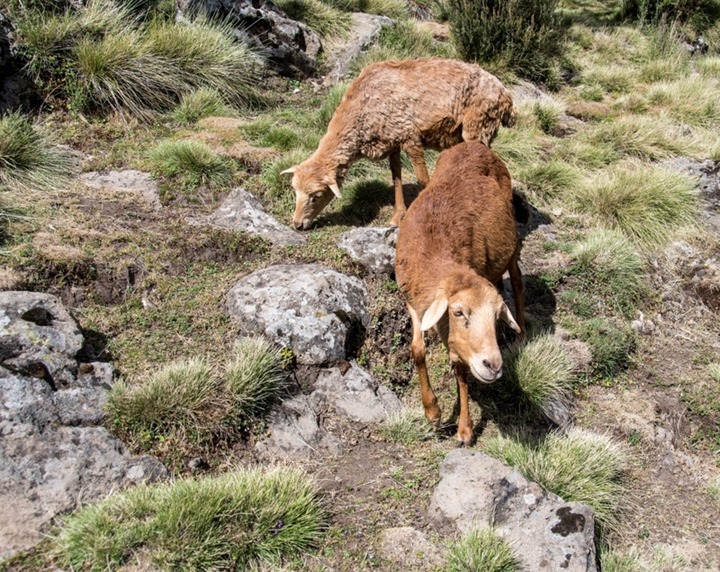 This is probably the most seen “wildlife” in the park. For a long time lots of villagers have lived and used the park. I think there is an effort to move more of these people out of the park to help maintain the park and prevent the livestock for instance from over-grazing the land (there have been issues with this in some areas). However there is also the sad fact of knowing that these long standing villages will eventually be no more. Several of them have already been moved out of their villages down to Debark or other places and I can’t imagine living in Debark after living in this beautiful environment. Time will tell as to the full impact of such actions however. 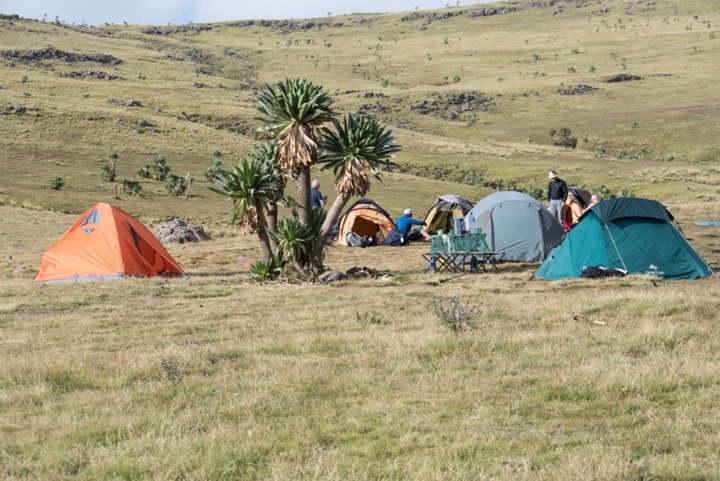 I may cover more about the campsites in another post but the camps were generally simple but for hiking campsites pretty good. They all had one or more latrines that while weren’t the nicest I’ve seen, seemed to be maintained for the most part. Sure they were basic and if you are not OK with a squat toilet then you were going to have a pretty miserable time.

It did seem however that near Chenek they were building showers and sit-down toilets near some of the latrines. It also seemed Chenek was a bit more built up than the other campsites as well though.

The difficulty though lay in the evening when it was dark and finding your way to the latrine was more of an effort. Some of the latrines were far from where you slept and the uneven ground made it rather treacherous to walk in the evenings especially if you didn’t have a headlamp (vs. say a handheld flashlight). You could easily noticed scraps of toilet paper in places from what I can only assume were various folks who just didn’t quite make the round trip to the latrines. 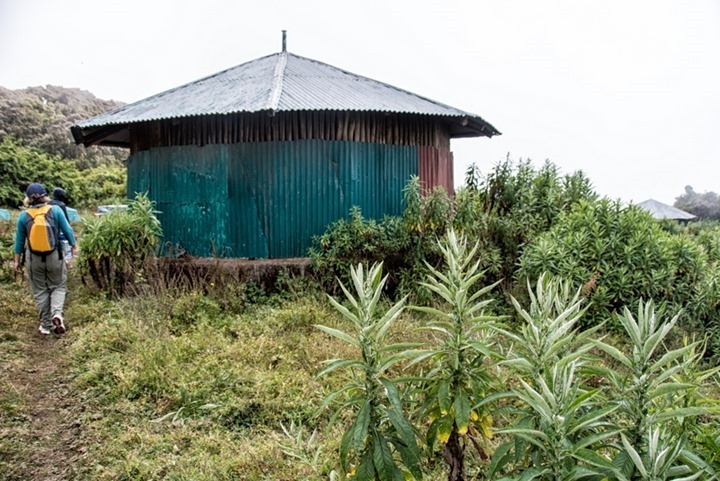 They all did seem to have a few buildings for cooking and the ability to get out of the elements if necessary. At least one had a “Scout Camp” where theoretically the scouts could camp. Although generally speaking the scouts tended to sleep near your tent out in the cold and elements. You really felt bad for them sleeping only with a thin blanket outside. You noticed they didn’t sleep much of the night and tended to sleep in whatever moments they could find of rest.

The major campsites seemed to also have community lodges. You could rent space in the lodge to sleep as well as buy food and beverages. They seemed to sell local food as well as a selection of soft drinks, water, and beer. We didn’t partake much in these things since we had already had food provided to us from the tour we booked.

The hike was easier in many ways and harder in other than I had expected. It is certainly not the most difficult hike technical or even strenuous wise. However as someone who packed for more “urban” travel I was not really prepared for a several day trek through the mountains. Regardless the going was fairly easy, and much of it could be done in sneakers without any specialized gear. There was a general lack of any rock scrambles or difficult terrain too

The most difficult part was probably the altitude although it is lower than some other big hikes. However high enough that altitude sickness does become a factor. The Simien Mountains includes the highest elevations in Ethiopia including it’s highest peak (Ras Dashen). We topped off at about 4070meters for one of the pass and several of the peaks were around this elevation as well. The campsites too were about 3720 – 3760 actually so even at the camp sites you had a lot to worry about if you were ill prepared. 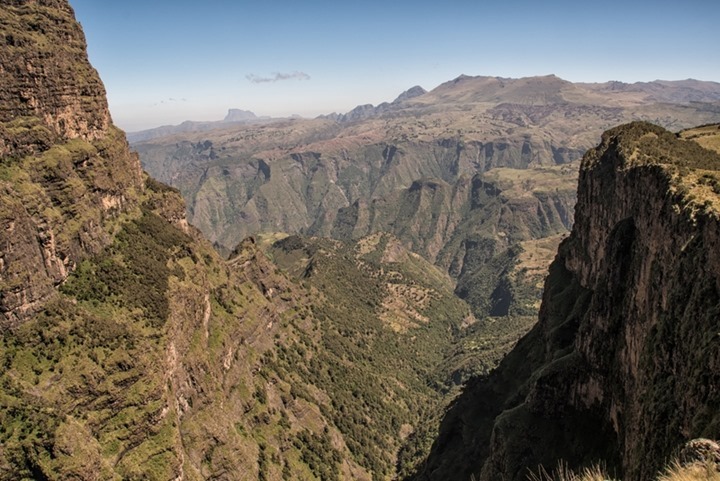 But even with all the issues it was the views. The views that made it worth it. You can see why Clive Nicol nicknamed it the roof of Africa. The vistas were stunning and as much as I saw it seemed there was something even more spectacular around the corner.

Finding your way was for the most part fairly straightforward. You could generally tell where the path lead and where you were meant to go next. We did have a guide and a scout so we were unlikely to in the end get really lost but given that our guide tended to disappear at times it was nice to figure it out sometimes by ourselves. However while a guide is optional a scout in fact is not optional. All travelers require a scout for trekking through the mountains and you can either hire one yourself or it will be provided to you through whoever sets up your trip. And the scouts do know where they are going so getting lost is probably tough. However the scouts don’t generally speak English so don’t expect them to help you plan where you should go! 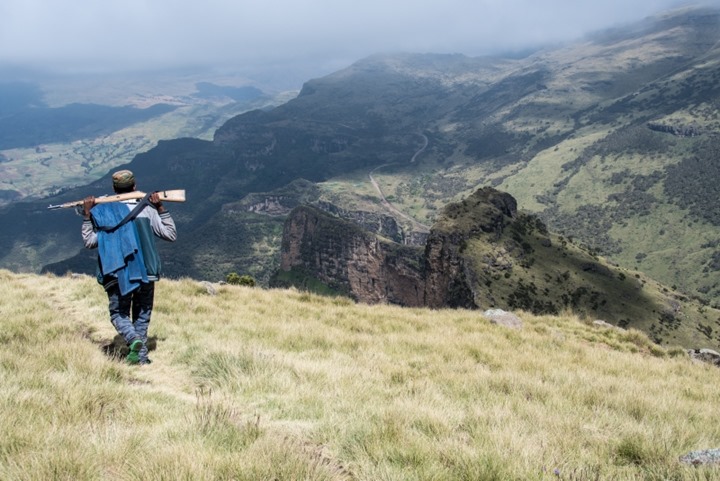 With the scenery, the wildlife and the fresh air it was so worth getting out and exploring this incredible place. The only thing I really regret was not having enough warm clothing for the very cold evenings! Once the sun went down the temperature plummeted quickly. But oh were the nights beautiful. The lack of light and light pollution made the ability to see stars second to none.

Overall the hike was incredible. Even with getting scammed a bit (more on that in another post) it was still one of the highlights of my time in the mountains. Certainly worth at least a couple days if you find yourself in Ethiopia and at the very least a day or two of day hikes would be sufficient for the less hardcore hiker. There is enough here though for you to do even more than a week but do expect things to get a bit redundant however unless you really have some goal in mind (such as bagging Ras Dashen). For me I think 4 days was more than enough time in the mountains and probably could have been fine with 2 or 3 even especially given all the other things there were to see in the country as well.

And well a few more photos to entice you to go too. 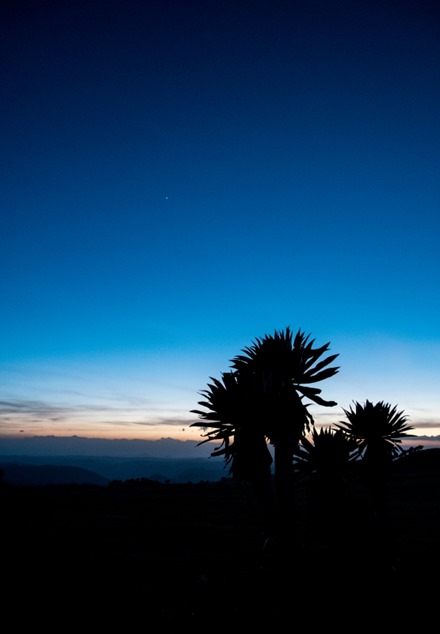 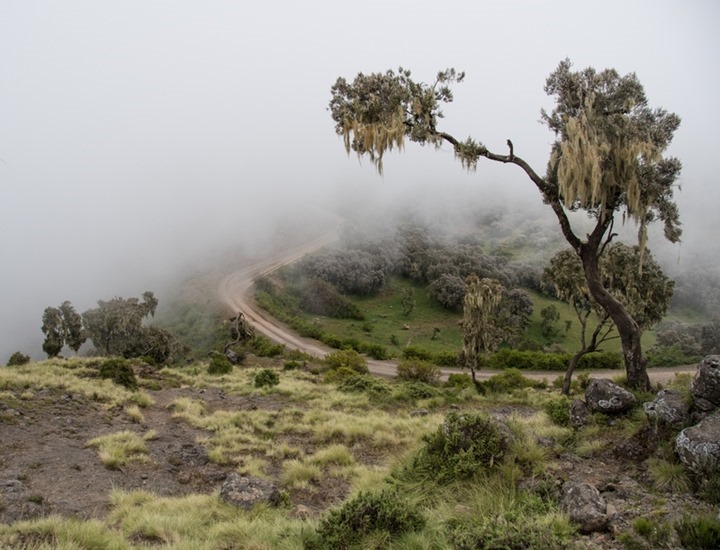 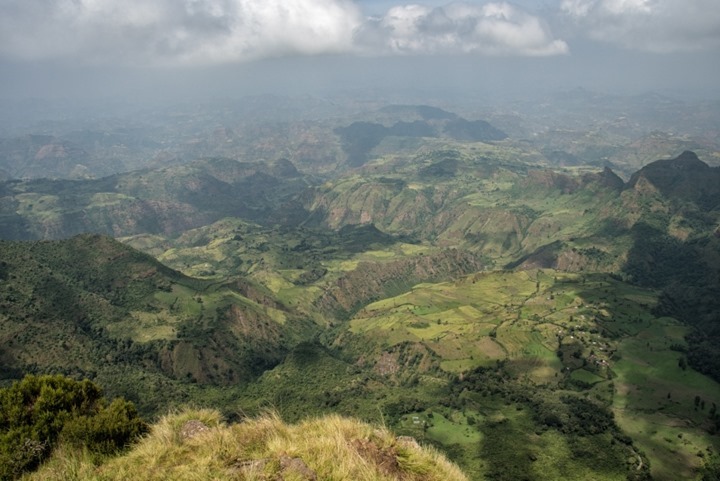 Where is Baku Located? Baku, the largest city in Azerbaijan is located on … END_OF_DOCUMENT_TOKEN_TO_BE_REPLACED