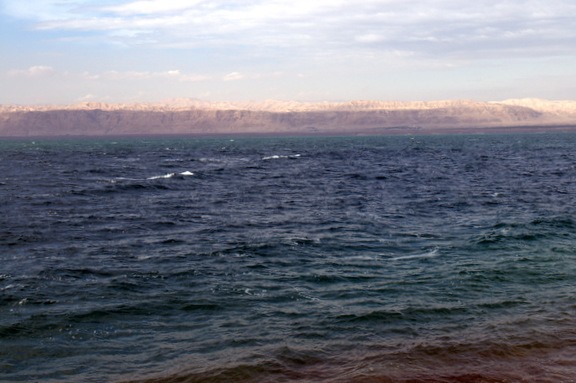 We sat there staring out into the salty abyss beyond.  My friends laughed a bit as we awaited the biblical flood to wash over us. Such things invoke humor when you know nothing is going to happen, but in a strange twist if such a thing were to a occur, this is the most likely of locations.

It was the supposed end of the world, or at least the one the newspapers had been chatting about.  The end of the Mayan calendar and all that; the one most of us knew was likely not the end of the world, but nonetheless the one the newspapers still seemed to harp on.  However the weekend we simply booked because it worked the best for us.  But regardless perhaps it was simple fate that brought us here to the lowest point on earth, on the shores of the dead sea, to await the coming reckoning.  Or more likely it is just the unusual irony that tends to plague my life from time to time.  Whatever the reason we sat there, reclined, staring out towards to the salty basin, awaiting the approaching storm.

Hmm…maybe I shouldn’t laugh so boldly as the skies begin to darken and the wind begins to pick up pace?

This world ending is taking all day…

But as places go, meeting the apocalypse at the Dead Sea Marriott is probably not the worst place to watch the world end. And so we waited, and hopefully given our calculations and time elapsing the moment of fate came and passed with just a whimper, or at the very least a low howl.  We added in a few extra minutes as well in case at the very least we synced our watches incorrectly.

“Well that was uneventful, what else is there to do here?”

We looked around at our beautiful 5 star resort and truly wondered what does someone do here at the dead sea when the weather is bad and the end of the world is late. 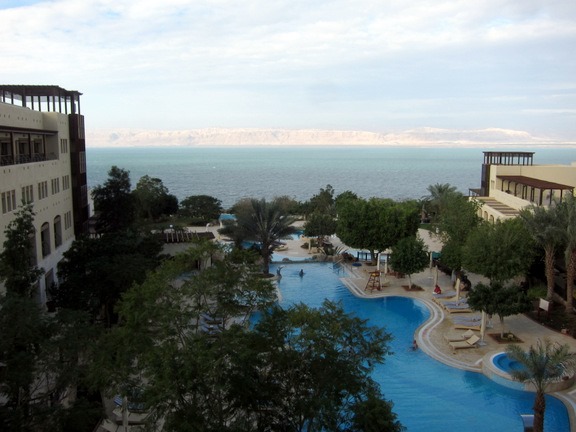 A terribly off season weekend in December would not have been my first choice in visiting the dead sea, but many of my friends were finding themselves leaving before the Christmas holiday so this appeared to the be the last possible chance. Originally we also did not plan to stay overnight here at the Dead Sea but thanks in large part to my hotel points I had accumulated for being a corporate shill (I should be careful saying that as I plan to return to my corporate shill status) I was able to book a free stay.

How many are in your party?

The trouble with free stays is that it starts to spread and you end up with more in your party than perhaps would have otherwise came. I have no issue with that as I love having a nice group to go and enjoy the time with but sometimes the hotels don’t exactly feel happy to accommodate that.  I didn’t realize how difficult it would be to sneak other folks in.

One of the first things you notice in hotels in Jordan and likely across the region is the security is seriously amped up. Getting into western hotels requires you to go through gates and x-ray scanners among procedures. When you have 4 people trying to get into a 2 person room well it’s quite a bit difficult to lie about that when the guards at the gate ask radio in that there are 4 people coming into the hotel under my reservation (you need to give your reservation to even get into the hotel parking lot).

The hotel made me upgrade to a “better” room although I would argue whether it was any larger than a standard.  However we did end up lucking out as now the hotel knew all 4 of us were checked in so we all got the breakfast included and free use of the spa.  This was HUGE given that the weather outside was frightful and the spa (with a dead sea pool) was probably the closest we were going to get to floating in the dead sea today. 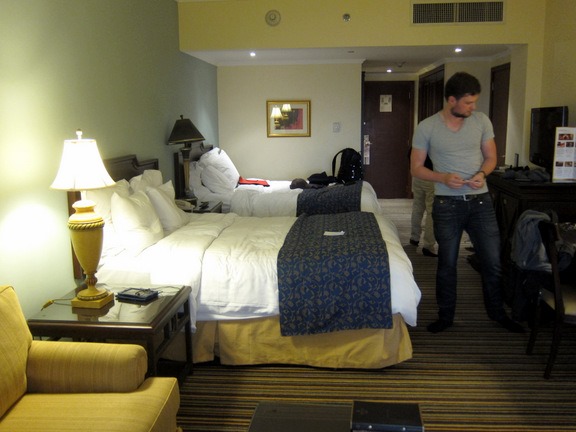 I am not a person who does well staying still in one place.  I seem to get cabin fever incredibly quickly.  As I realize the weather was getting bad I started to look at this 5 star resort as more of a 5 star prison.  I wanted to get out, and do something.  The hotel itself is beautiful, undoubtedly.  There are several restaurants both indoors and outdoors, a lovely outdoor set of pools, a movie theater, and a indoor spa.  However the problem with the dead is is that the whole region is occupied with these large resort cities, outside of our resort there are several other resorts lining the motorway that runs past along the coast line.  The trouble given that this area was unoccupied for so long, there really are not any other establishments or towns in the vicinity.  Nothing, nada, zilch. Or at least nothing to walk to.  And with no car among us I started to feel like a well heeled prisoner.  I really need to learn how to relax better perhaps, so I did what any well heeled prisoner would do, I went off to the spa in search of some relaxation.  Sadly I don’t have any photos of the spa, but it really is a well done spa, including Jacuzzis, saunas (wet and dry), and indoor pool, and a indoor “dead sea” pool, that includes the brackish water from the adjacent sea.

There are a few options for dining at the Dead Sea Marriott.  Mostly it seems to be general western fare, so if you are looking for more middle eastern options you might be a bit disappointed.  We at the Champions sports bar for lunch with is typical American cuisine burgers, tex-mex, nachos, etc.  True to American fashion the portions were larger than could reasonably be consumed in one sitting as well.  I thought the food was fairly decent particularly since it has now been a while since I’ve eaten American cuisine, and my international group of friends here seemed to really like it as well.  Prices were a bit higher than I had been used to in Jordan, but standard for a resort.

For dinner we ended up dining at the local Italian restaurant which was actually also decent but fairly pricey overall.  I ate a lighter meal for dinner than for lunch given the enormous portions of food so far. I was also a bit surprised to see they had pork options on the menu.  I had heard that people could get pork in Jordan but I hadn’t seen it anywhere being served until here at the Dead Sea.

The movie theater was shut down so options seemed to really self limit themselves.  We checked out the onsite lounge for some drinks and desert. They had a happy hour special and I quickly learned that my fruit smoothies and mocktales were more expensive than actual alcoholic beverages at the resort at this time.  Seriously I thought everything was supposed to be overpriced for a sin tax or something? 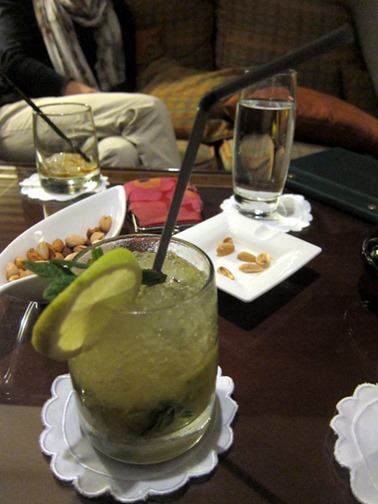 Swimming in the Dead Sea

It wasn’t until the next morning that we had our opportunity to the venture into the dead sea.  We basically set ourselves to go in regardless of what the weather was going to be like since this was the only opportunity left this trip.  The early morning air was calm and the weather was brisk after the storm the previous evening. We each wandered out of the room at different intervals depending on our sleep the previous night. When I reached the beach I realized I wasn’t the only one trying to swim that morning. –A- had already headed down there earlier than I did and we met a girl who was visiting from the Philippines for a few days.  The beach itself was very rocky, without any sand to speak of.  I have heard perhaps the public beaches have sand, or maybe some of the other resorts do.  But at the very least it was very private. 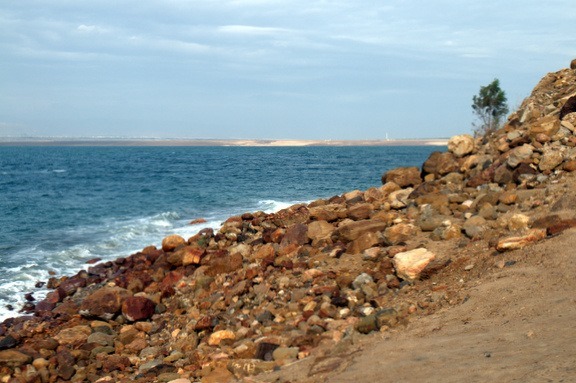 General practice at the dead sea is you wade into the water, get yourself wet and then head back out and cover yourself in mud. You sit out and let the mud bake dry and then head back and and have the waters wash it off, and you end up with beautiful exfoliated skin….or something like that.  Given the cool, moist air, I was really skeptical if that that second part would even be possible. A few of the folks here at the sea were dipping their toes in and I went in and jumped.  The waters in late December were cool but warmer than expected.  The sea is salty as expected and eyes burn upon touching. Watching the fellow swimmers attempt to stand up in the water as the added buoyancy causes their feet to pop up to the service was incredibly comical.

Likely the best part was covering ourselves in mud.  Not necessarily for the exfoliating properties, but because we were considerably stupid yelling out lines from the Predator movie in our best faux Schwarzenegger voices. Juvenility was the theme of the day.

Sadly our time was short here as we had to prepare to return to Amman shortly. Having survived the apocalypse, inclement weather, and even the lowest saltiest place on earth, it was time to return from our “vacation” back to our errr…other vacation.  Having a new lease on life, and a freshly exfoliated skin made the journey home to tackle class finals and Amman traffic all the better.  And knowing that had the world ended, it was a blessing to know I was exactly where I wanted to be, doing something I had always wanted to do.

Getting to the dead sea

Sadly there are really no cheap places to stay at the dead sea.  You can find deals online, but they will generally be expensive if you cannot split between people. I stayed at the Dead Sea  Marriott and would recommend it as a nice spot, but it is not cheap if you don’t have points (like I used).  I’ve heard there are good deals occasionally at the Holiday Inn, and of course if you have points you can check out the Movenpick or Crowne Plaza perhaps.

Most of the big hotels do have day use fees.  Some will wave those fees if you eat at the one of the restaurants at the hotel.  There is a public beach but that still costs 20JD for a day use fee.  It is not a cheap destination overall, but it is unique.  Your best bet is to split costs among other travelers who are wanting to visit as well, as this is really the only “budget” option.

If you have any other questions, please don’t hesitate to ask!

With over 2,000 natural sandstone arches, Arches National Park lives up to … END_OF_DOCUMENT_TOKEN_TO_BE_REPLACED