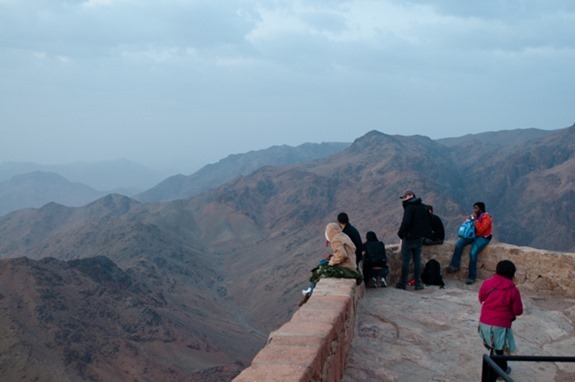 The way down was fairly uneventful for us.

Whiskey seemed to reprise his role in our group or perhaps his uncanny body double.  But the benefit of morning hiking is that you can actually see where you go.  The clot of hikers slowly flowed down the mountain steps onto the trail below and Whiskey bounded along laden with our friend upon his back. If there has to be anything scarier than going up a mountain a camel I would imagine trying to traverse downward with him.  Constantly we watched him stop and start until we were strangely separated as the clot slowly maneuvered us along further and further downward. 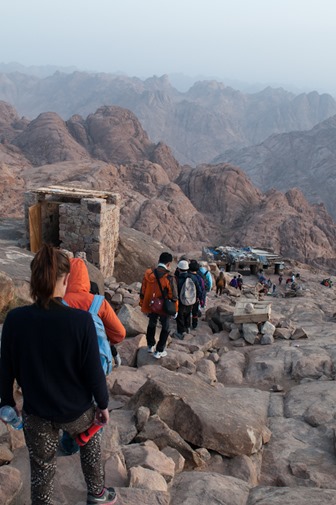 Travel in the morning was really quite nice to be honest.  Being able to see where I actually was going was quite a nice change of pace, and certainly better scenery.  You start to get the impression of the size of the place, and the surprisingly rugged landscape that surrounded us.  I had not realized how mountainous this area actually, was.  So how do they actually know this is the right Mount Sinai? 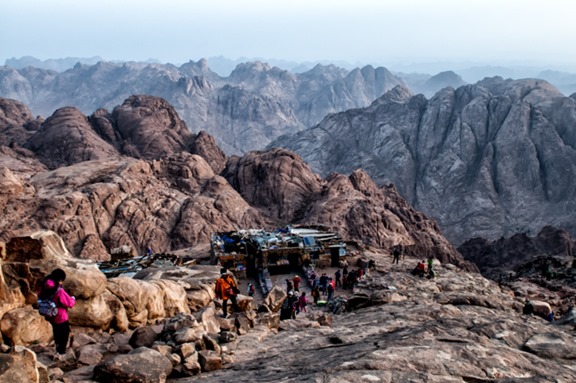 Is this the mountain you have been looking for?

Before the Bedouin tours, camel rides, and little snack shops, there actually was some dispute as to what was the biblical mountain from the holy books.  A different nearby mountain was identified earlier, but later with other knowledge, people determined or believed that the current Mount Sinai (being the highest in the region) was the actual mountain of the commandments.  Certainly, there wasn’t tablet shaped cutouts missing from the peak, although that would have certainly been useful for identification purposes.

Although when you look at the region it still seems somewhat arbitrary.  I expected there to be a more distinct difference in the mountain of Moses from the rest in the area, but it seems to blend in fairly well with the mountains in the area.  I think I had the belief that it would have been more of a lone mountain among the dessert below instead of just a peak among many peaks.

However, it’s amazing how skewed your knowledge becomes with only information garnered from Sunday school stories and a Charlton Heston movie.  And still to this day scholars still disagree on the actual, true location.  There is a huge swath of land, that could have housed the fabled mountain stretching from Egypt to Saudi Arabia and beyond.  Perhaps we will never know for sure, and perhaps it doesn’t matter, and even more likely I won’t get my money back for the hike if they realize it was somewhere else anyway.

Perhaps we will never know for sure, and perhaps it doesn’t matter, and even more likely I won’t get my money back for the hike if they realize it was somewhere else anyway. 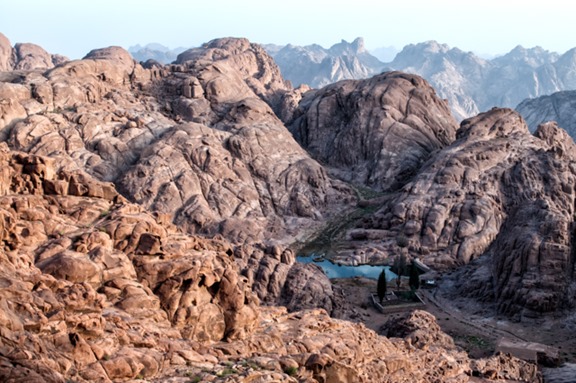 I was also surprised that when I expected there to be desert and more desert to see a little lake (possibly man made?), existing as well.  We didn’t follow the path down in that direction, but it makes you realize this area is not just a stark wasteland, that there is life and people and activities going on and have been continuing for centuries.  People live here and travel through here.

For centuries travelers have journeyed past, caravans moved along the endless sands, monks prayed for salvation, and families herded their animals from one small water source to the next.  It is always strange to realize life in such unlikely areas, and not modern metropolises birthed from oil money such as in the Gulf, but life that has subsisted even in sparse pockets with seemingly unlikely odds. 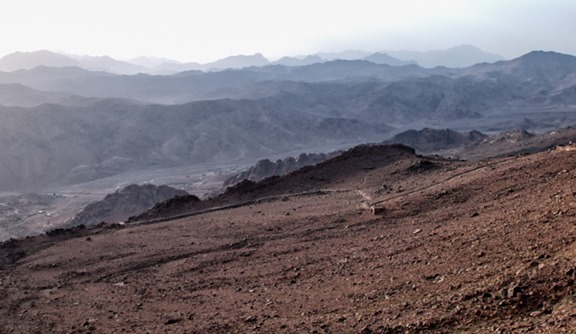 It was still a beautiful place, the journey down continue quickly and deliberately.  At the base of the mountain is the beautiful Saint Catherine’s Monastery, built ages ago in the 6th century A.D.  Sadly the Monastery was closed these days due to Orthodox Easter.  I had known about Orthodox Christmas and while it makes complete sense, I didn’t realize there was a separate Orthodox Easter as well.  The more you know! 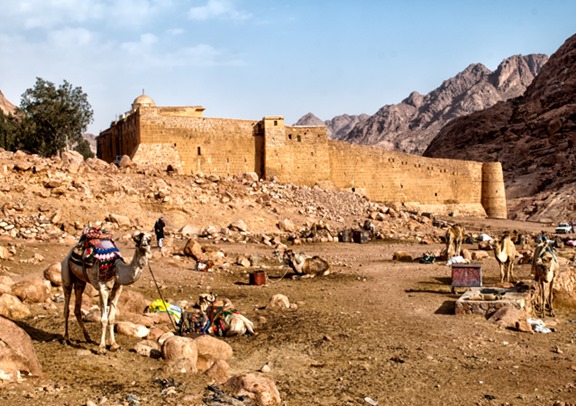 There was a bit to see in the area, like random little things such as this potentially camel parking lot?  Ok kids, remember where we umm…parked.

I was definitely sad, the Monastery was closed, beyond just the inner courtyard.  We all entered and relaxed while they told us about the Monastery.  I found myself up on the ledge drifting in and out of sleep and enjoying the lovely weather of the morning.  It’s been a while since I’ve been awake for the entire night like this, perhaps not since I climbed Mt. Fuji many years ago. 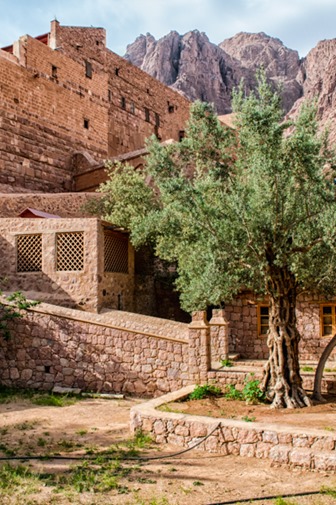 The Monastery is fascinating however as it has survived so many centuries over the years.  There is even an unused Masjid sitting within the walls.  To think it has survived through conflict, religious changes, political changes.  Ever wonder how it managed to last this long intact?

So how did it survive? 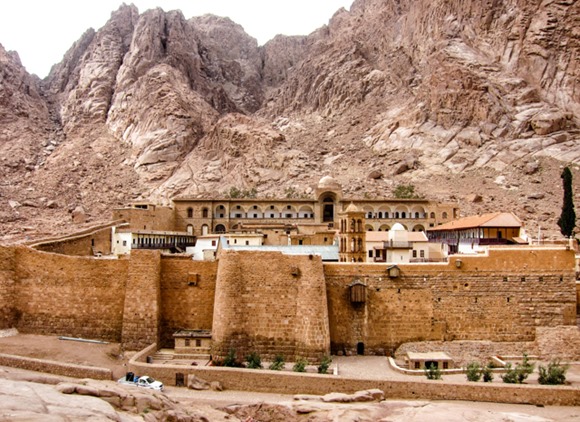 That was one of the things I wished I got to see when I was inside.  There is a treaty supposedly signed by the prophet Muhammad so many centuries ago guaranteeing the safety and independence of the monks and monastery for all future generations.  The Actiname was a treaty between Mohammed and the Sacred Monastery of the God-Trodden Mount Sinai which guarantees that Muslims in the future will not harass, tax, interfere or otherwise cause any harm to those who reside in the Monastery.  This also guarantees freedom of worship to pilgrims and other travelers visiting and transiting the Monastery as well. 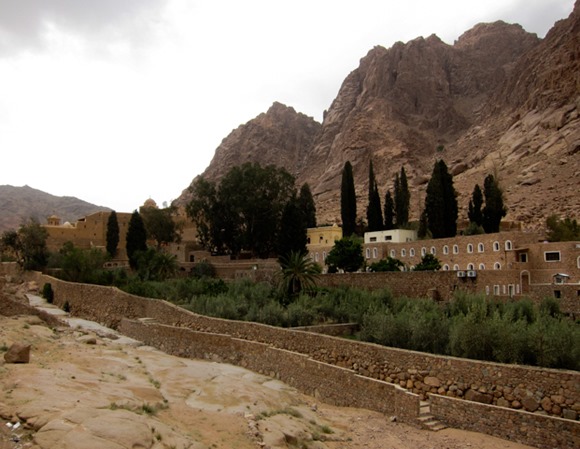 Sadly it is a certified copy supposedly in the Monastery that I read as the original was moved many centuries ago to present day Turkey.  Also beyond this, there are many wonderful pieces of art and other religious artifacts including a religious library with an extensive collection of ancient and important documents.

Additionally, the chapel was built on the spot where the burning bush was supposed to have been seen, and the current bush is supposed to be the one that Moses had seen.  While it is possible this is not exactly the correct bush (given the disputes whether it’s the actual mountain or not), the history and mythology is certainly worth noting. 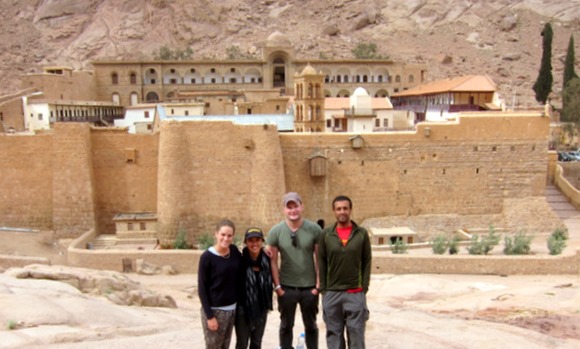 The future of Tourism here?

We gathered up our stuff after some photographs and relaxing and moved along to a nearby hotel for breakfast with the staff.  It was simple but certainly far better than the breakfast pack we carried from our Sharm hotel.  You could see the emptiness both of the mountain area and the hotel for a good indication of the suffering that the tourism industry has been struck with since the Arab Spring erupted throughout the Arab world.

As of this visit, things have been overturned once again and of course, understandably tourism has suffered as people have canceled their plans and moved onto other destinations.  As we spoke with him it was definitely apparent the dire issues they had as with any travel industry they are very much tied into the politics and the safety of the regions they serve, and unless things improve soon, the future of their business and the livelihood of many in this region are in trouble.

The Pearl City, Hyderabad has an incredible assortment of things to do from … END_OF_DOCUMENT_TOKEN_TO_BE_REPLACED

One of the most tragic events that occurred across the great plains. … END_OF_DOCUMENT_TOKEN_TO_BE_REPLACED