“Wow that was scary” – C said as we got out of the van into the darkness.

I looked around and thought about the hike ahead, and strangely had no recollection of the journey to get here.  For better or worse over years I’ve developed the ability to sleep almost anywhere.  A sort of parlor trick to perhaps amuse my row mates on those cramped international cattle class flights. So beyond the first check point out of Sharm El-Sheikh the only memory of the trip was a sore back and a stiff neck. 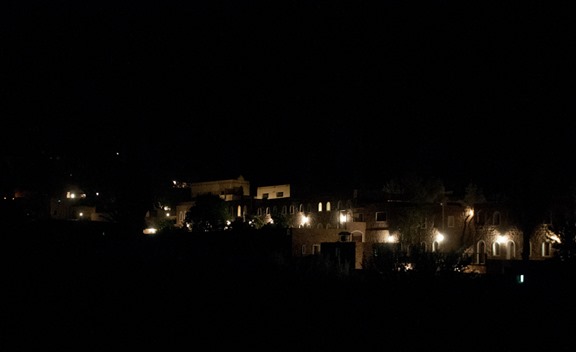 I was excited to get on our way on Mount Sinai, having been the main reason for me coming on this trip to Sharm El-Sheikh.  Having never been a “beach” person, the opportunity to climb a mountain, particularly a historic one was enough justification for me to make the journey down here.

We packed our snacks and met our guides for the road ahead.  We wandered along the trail, looking out at the lights along the path.  They marked the location of St. Catherine’s Monastery which stood guard over the mythical location of the burning bush so many millennia ago.  It was the only light that could be seen in this area, flickering off in the distance as we walked the trail towards it.

Thankfully I had brought my trusty headlamp with me for this trip.  One of travel investments you make and always try to pull out for buyer validation.  Another one of my travel mates also had a flashlight but having extra light was useful for getting around.  Besides being hands free, headlamps have the added benefit of blinding your friends when they attempt to garner your attention. 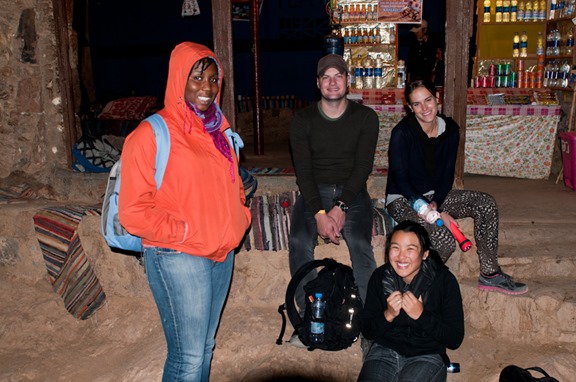 The one thing that was noticeable was that we were the only group walking on the mountain here.  I couldn’t tell if perhaps we were late to the party, or if there just were not anyone else around here.  It was likely a bit of both, the turmoil in Egypt has certainly impacted tourism greatly.

The trail was dark and rocky.  You almost wonder why Moses found himself on this mountain of all the others nearby.  Nothing seems to even grow from the ashen ground surrounding us.

The guide walked briskly ahead of us with his buddy from town.  He was a nice young guy, and was a good chance to practice some Arabic as well.  Beyond him and his friend the only other passersby were locals who tried to sell goods or camel rides up the mountain.  It seemed every few minutes there was a person asking us to ride a camel.

As is always the case, when you need a camel it becomes harder to find.  One of my friends was not feeling well and we weren’t sure what she wanted to do.  She was complaining of stomach cramps and its one of those things, if you are not feeling well, you should deal with the issue soon because the further we go the harder it will be to manage it later.  But she was determined to continue on the trail.  It would be her birthday too when we reached the summit, so she had another motivation to see the sunrise over the mountain as a nice birthday celebration.  But it’s always better to enjoy your birthday healthily.

After a bit of struggling she was not going further without assistance.  And of course the general train of camels decided to stop as well.  Typical fate is it?  It seems no matter how far you go up the cost of travel seems to be the same for any camels, and we did manage to find a last camel going up and worked hard to negotiate it.  Named Whisky for his apparent swaying walk and debaucherous lifestyle he probably was an apt inclusion for our ragtag bunch of wanders.

OK I don’t know what would constitute debaucherous for a camel, but if there is such a description…Whisky would be it. 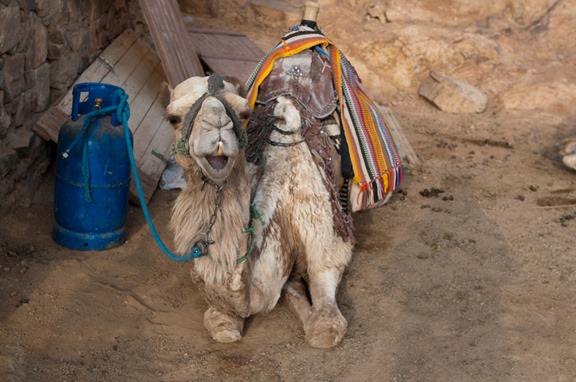 Not whiskey but the only Sinai camel photo I had, so we’ll call him whiskey-like

Off –R– went bounding up the hill on camel back while we tried to keep up.  Beyond the trail there were steps that were not accessible to camel so she had to return to labored walking again, but we were now within striking distance of the summit. Besides the steps the only thing also in our way was a horde of Korean tourists and their incredibly annoying tour guide.  He would stand along the side of the trail screaming loudly and singing songs.  I made it my sole mission of the hike to just not be stuck behind me…

And then it was it.  We had reached the summit of the mountain.  Not a difficult hike by any means, but a historic and interesting ones.  At the summit are a church and a mosque that stand side by side in remembrance of the importance of this mountain to many faiths.  I entered the small building, musty smelling and dark from years of little use with only the crack from the door to provide it light.  As my eyes adjusted I could see the area was small but taken care for and I took this joyous opportunity to say prayers and be thankful for all the opportunities that allowed me to visit the Middle East and travel to all these amazing places.

I rejoined my friends sitting on the edge breaking out snacks from our pack away breakfasts from our resort.  We all took the chance to watch the sun slowly peak its way above the clouds and the haze of the valley.  More people started wandering up, several more than I recall seeing on the trail, but still not a huge sum of tourists.  And thankfully no one had died, one of my friends was a bit out of commission but still celebrating her birthday even if not probably the way she envisioned it.

Looking out over the valleys below it was truly magical.  While it was not the promised land it was still quite a amazing sight to behold. 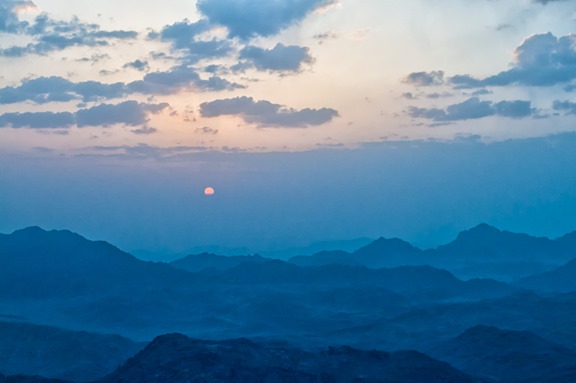 Wanted to include a few more photos from the summit and our time on Sinai.  Enjoy! 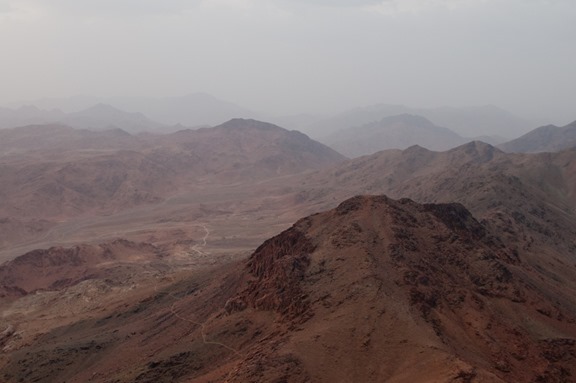 Across the Valleys around Mount Sinai 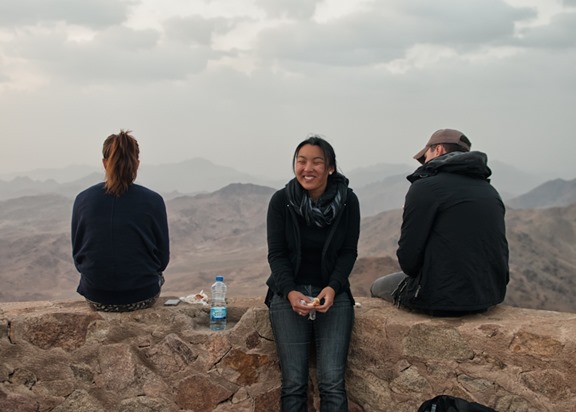 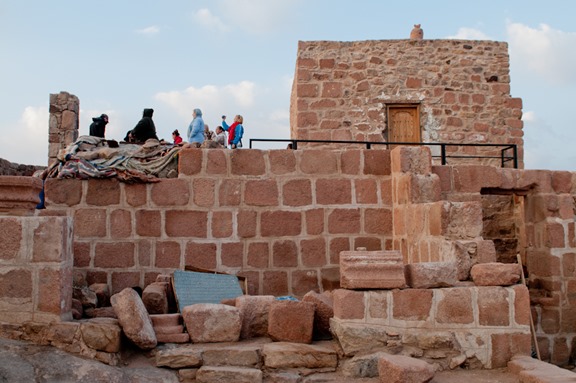 The Mosque on the Mountain 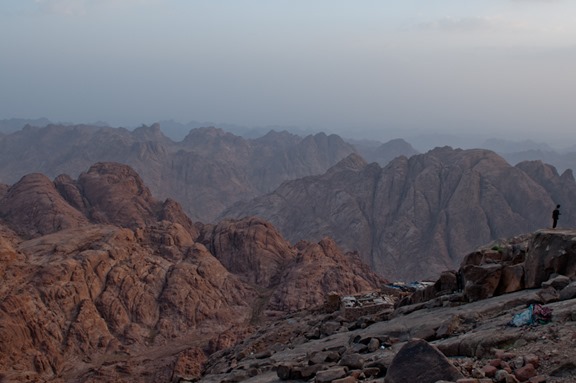 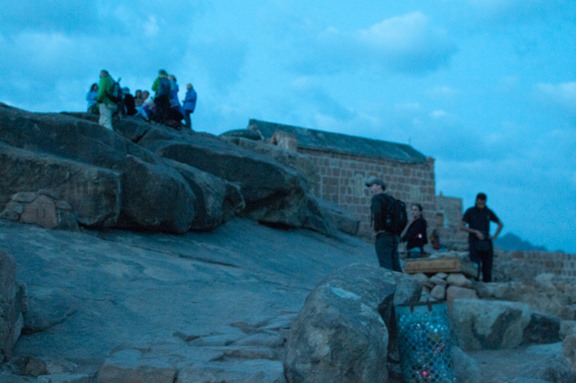 Us and other travelers on the summit. 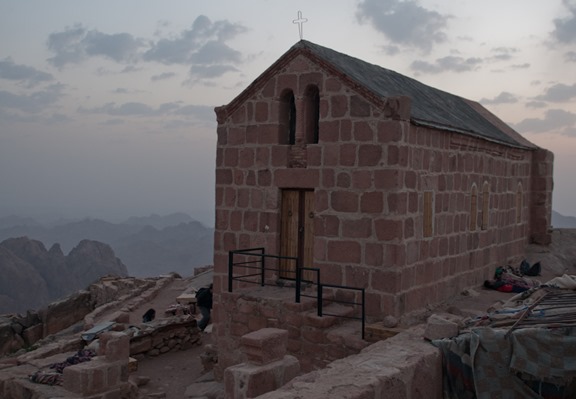 Mount Sinai (جبل موس) is not the easiest mountain to reach solo .  This trip was done in May and things were bad, and now the Sinai is even worse.  Travel on the Sinai would not be recommended solo particularly since locals would know where it is dangerous and where it is not.  Most hotels, etc. from resorts in Sharm will have tours to Sinai and you can ask them in terms of safety.  The mountain itself did not feel unsafe and the locals do depend greatly on tourism so I hope it does not completely fall to zero there.  Just proceed with caution.   Mount Sinai is located in the south, travel to the North Sinai is off limits at the moment and extremely dangerous.

St. Catherine Monastary: We happened to be there during Orthodox Easter so it was closed.  I’ll try to talk more about St. Catherine perhaps in a following post.

Warning...Use of Deadly Force Authorized... It's Classified... Or at … END_OF_DOCUMENT_TOKEN_TO_BE_REPLACED

So you are Looking for the Best Things to Do in Denver? As someone who … END_OF_DOCUMENT_TOKEN_TO_BE_REPLACED

“Is the gate open today?” “What gate?” “The gate at the border” “What … END_OF_DOCUMENT_TOKEN_TO_BE_REPLACED