Have you got your accommodations for tonight? – Alexander Asked

No not yet, we are thinking maybe to check out the hotel in town. – I replied

Well there is only one hotel in town – he answered

That makes sense, it is a very small town –  I replied

It does however have 500 rooms

We sat there talking with Alexander about hiking and the national park nearby . He described to us the town and the prices of things. Mentioning the cost of private accommodation vs. the hotel. It seemed to be basically the same cost, and honestly there is something about a 500 room hotel from the Yugoslav era that certainly sounds interesting.

At least something different.

Now I don’t normally do hotel reviews, although it is something I have considered doing more of. But with something like the hotel Lepenski Vir I needed to discuss it.

Built during the 1980s, the hotel catered to big corporate retreats. Which is one of the reasons why the hotel is so large (although I think there was a push for these types of mega-projects in Yugoslavia). Those days it was common for companies to bring all their employees together. And it’s a beautiful location on the bank of the Danube and on the edge of Đerdap national park, which does have some lovely hiking and views.

However also of note is that you need to get a guide for much of the national park (for park fees as well as to protect the park in certain areas). Hopefully though the guide you end up going with doesn’t quit on you when a bigger group shows up (like ours did….bleh). 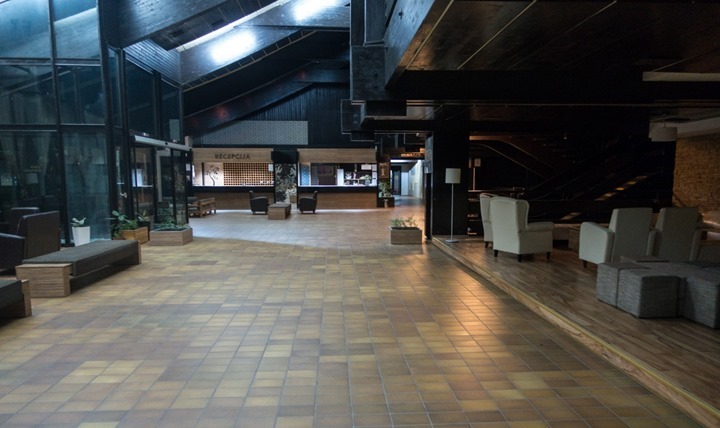 It was late when we drove up the hill towards the hotel. The first thin you realize that it even though its so dark outside you can make out the outline of a very large hotel. However one only really begins to understand the size of the hotel as you enter the cavernous lobby. Being the only folks around also contributed to its mystique.

The hotel itself was split into several blocks. Blocks A and C appeared to be for rooms and other sections, and B the main section with the restaurants. Block A however appeared to have been shutdown, perhaps permanently. A hotel this size seemed to be really difficult to maintain especially in this day and age and probably it was just simpler to close it down with the reduced number of visitors.

When we checked in, we noticed that perhaps only a dozen or so rooms were also otherwise occupied. 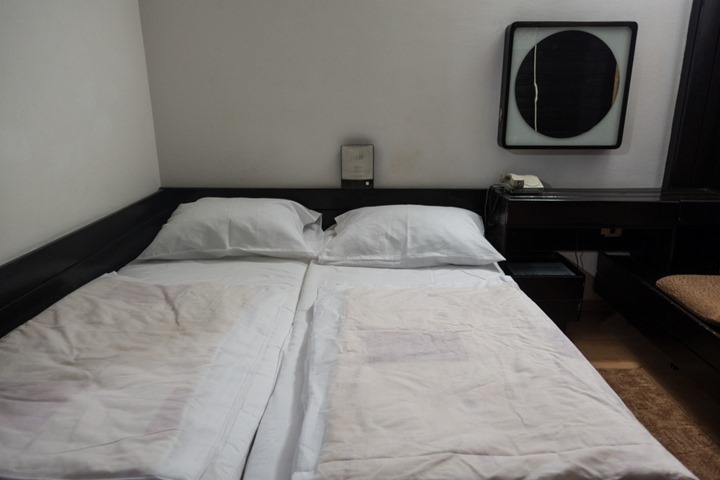 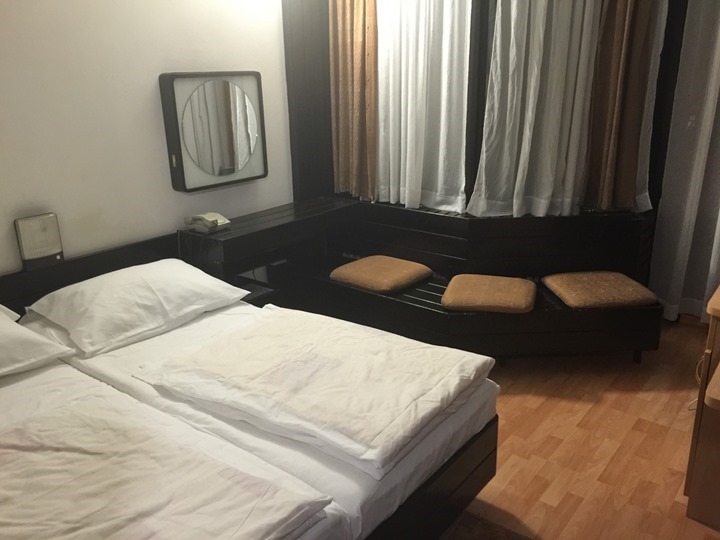 The rooms themselves were small but tidy. We both chose single rooms and there was enough space for a person. Small yet comfortable especially for short stays. The views from the room (particularly mine) was stunning. Looking out over the Danube from my room was a highlight of the stay. My friend however had the opposing view of the parking lot (not quite as picturesque).

Much of the hotel seemed to be a lot of the same. Hallway after hallway of floors and several of them in each block. The block we were in seemed to have 7 and the other block (that was closed) 5. Although I couldn’t verify that. There was what appeared to be a gym (at least once “was” a gym) that was locked and empty, and a disco on the ground floor that may as well have been abandoned. We did see what appeared to be several girls dressed up for going out wandering the halls at one point, but they did not head to the disco (we did in fact check). 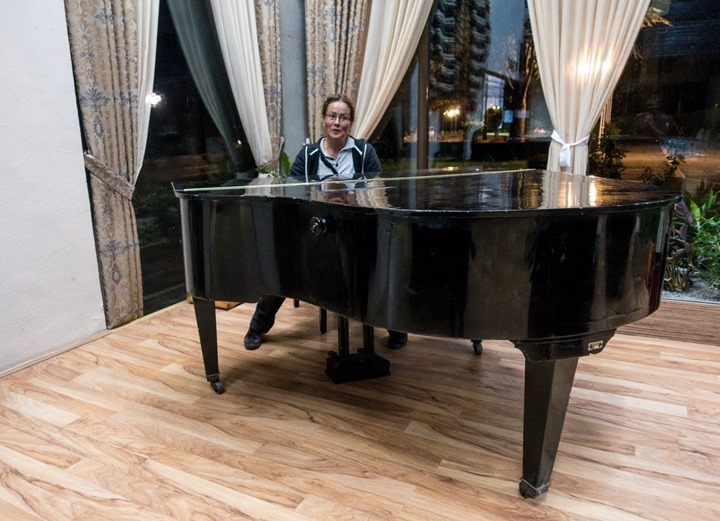 The lobby was decorated with various different awards, badges, and a large piano. There were little patches and such from various international football clubs. Apparently this place was very popular with Middle Eastern national football associations. I’m not sure why, or where they trained around here, but it was clearly something they advertised and were proud of.

Even though we opted for the half-board option we did in fact decide to stay in the restaurant for dinner as well. There were it seemed to be multiple restaurants. Or probably a bar, a restaurant, and what seemed like a massive dining hall.  I imagine the dining hall hasn’t been used in decades ever since the collapse of Yugoslavia and the end of it being used as a retreat for employees of large Yugoslav companies.

The restaurant had an extensive menu and well no one seemed to speak the same languages we spoke (my friend and I both speak a couple languages just not Serbian very well). 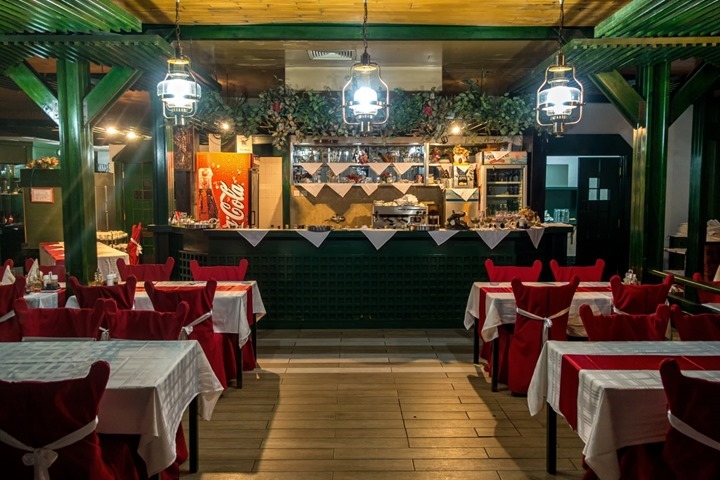 Ordering was definitely part of the adventure as well as frustration. Once I ordered one item the waiter quickly turned and disappeared while the other words were just leaving my mouth…darn.

I tried to stalk him a bit, which was harder than it seemed given we were the only folks in the restaurant. Finally I caught up with him again trying to order some peppers and local cheese.

“I’d like the peppers” pointing at the menu to make sure he knew what I was talking about. “And..”

Eh…I guess it wasn’t meant to be.  However oddly we did manage to get two peppers, but that’s ok I suppose. The food itself was generally ok. Nothing great, rather plain and overall warm…although lukewarm in some places. Still glad we ended up eating here (there weren’t really many choices in town anyway).

The best part though came at the end of the meal when he handed up a brochure of the hotel. 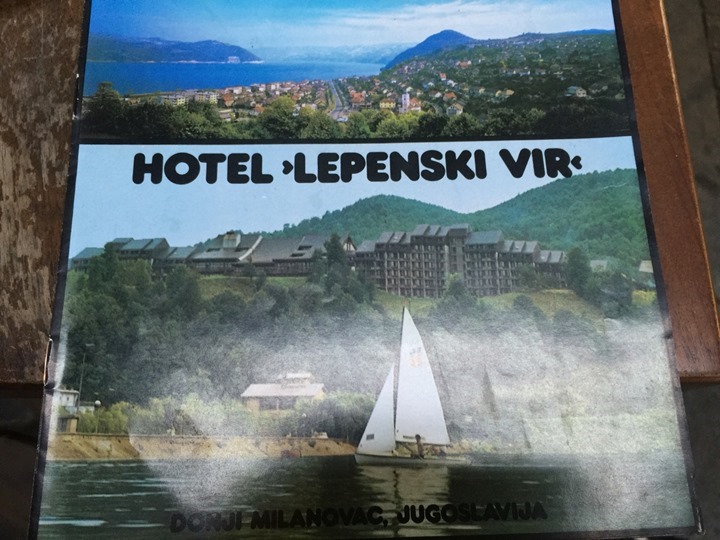 How OLD is this pamphlet?

Waking up in the morning was probably one of the highlights, especially with this view from my window. Something that was more than worth the price of the hotel and the stay. The Danube is gorgeous and with the sunrise even more so! 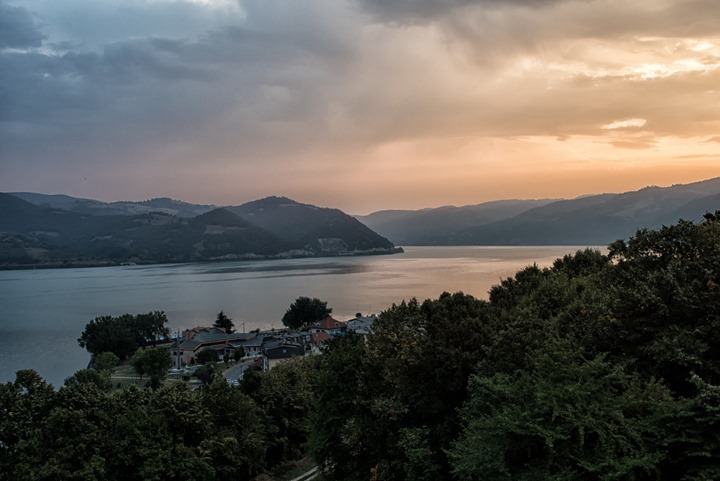 Breakfast was included as part of the price of the room and it was held in the same restaurant as dinner was held. Breakfast consisted of ordering something off the menu (such as eggs), some bread, and a hot beverage or juice. Or in this case, something that was juice colored as I’m not quite sure it was actually juice as opposed to ‘orange drink’. 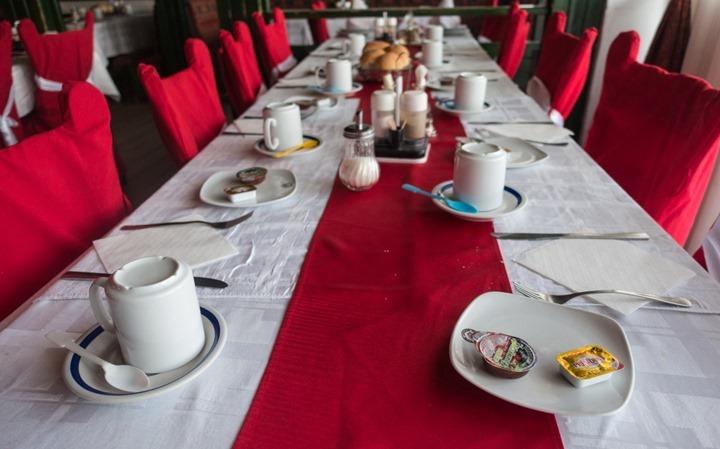 The eggs came as an omelet and I was shocked to learn that they somehow screwed up the omelet…how do you screw up eggs? Seriously? It was weirdly flavored and sweeter than I would have expected them to be. 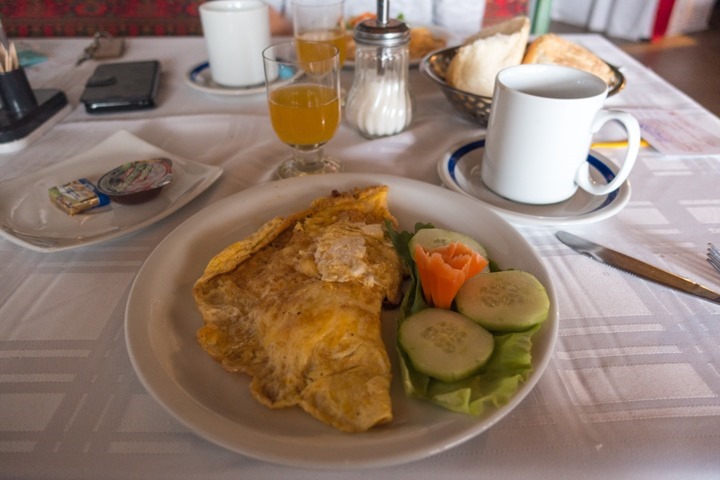 The coffee though was far worse…nearly unpalatable. It was room temperature and tasted worse than the pencil shavings flavor you often get at some low-budget hotels. I’m fairly convinced the coffee we were served was actually brewed in the 80s.

Checkout was just as interesting. It seemed a lot of the small devices that were peppered around reception were a time capsule into a forgotten era as well. I think my receipt was printed out on an old dot-matrix printer.  Remember those? Yeah? Who still has them? Can you even get ribbons, ink, etc. for them anymore!?

So how was it?

Well overall I’m so glad I stayed in this hotel. Really glad. Sure there were issues, and sure there were strange little things about the place, but in  many ways I liked this hotel because of that. It is a unique experience, and it is an experience into a time and place that many of us never got the chance to experience or perhaps were not even alive to remember. 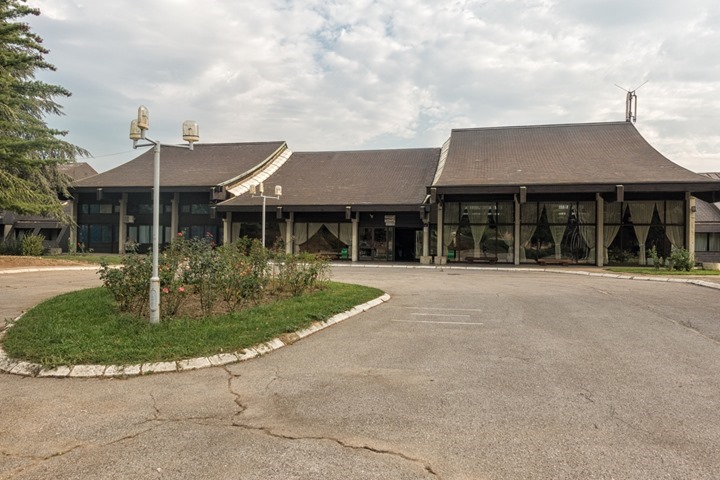 I loved the old 80s style of the hotel and the history and size of this place. It is something that I can understand may not be the choice of everyone and sure there are other lodging options in Donji Milanovac if you choose to stay there, but I hope you at least consider staying here and experiencing the old Yugoslavia. I think such places like this are very hard to maintain and perhaps one day they will disappear, and maybe that is for the best? I don’t really know, but I do know that these experiences are one of those rare things in travel. Something authentic from a previous generation.

Perhaps though you might want to get breakfast somewhere else though.

The price was about 2100 Dinar after taxes and fees for the half-board option. You can also pay a bit less if you choose to stay without breakfast (or a bit more if you opt for full-board). If you do stay, be sure to request a room with a view of the Danube, you’ll certainly be glad for it.

If you do want to book, check out the website for Hotel Lepenski Vir, although you’ll likely be able to show-up and book in person as well. 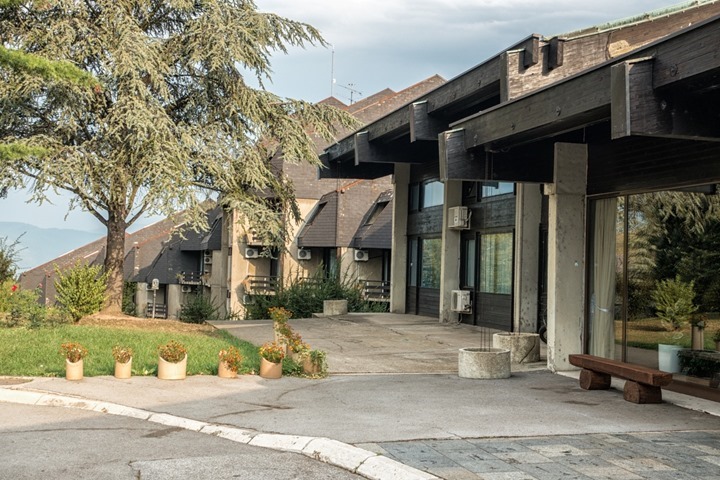 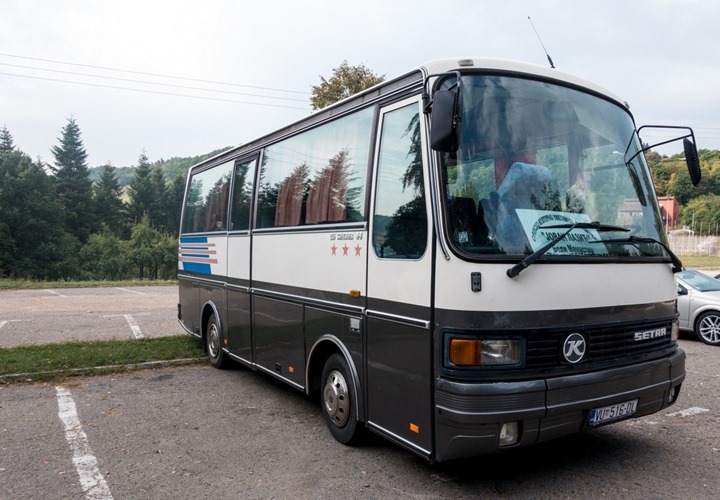 Did you know Ohio's Place in Aviation History? The Dayton Aviation Heritage … END_OF_DOCUMENT_TOKEN_TO_BE_REPLACED

Some of the Best National Parks are in Washington State. Included among … END_OF_DOCUMENT_TOKEN_TO_BE_REPLACED