The tough part about quick weekend trips is that the days end up being really long as you try to fit everything in.  This weekend was no exception as we attempted to rise early (after a semi-ok night sleep, and loud music playing from our upstairs hostel neighbors) to get back out on the slopes and get a day’s worth of skiing in before our train to Geneva.  But life’s too short to want to sleep in when the mountain is calling. 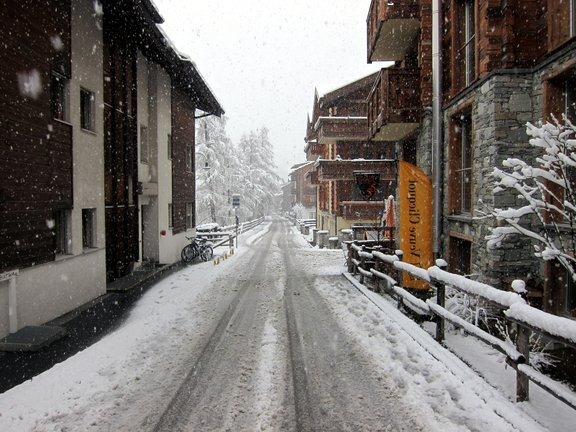 Walking in a winter wonderland…

It was a whole different scene outside today then it was yesterday.  Snow was coming down hard and the sounds of avalanche control explosions could be heard in the distance. It was a bit surreal even, I didn’t expect this much snow at this time of year…it was amazing.  I was hoping for a good day out on the mountain. 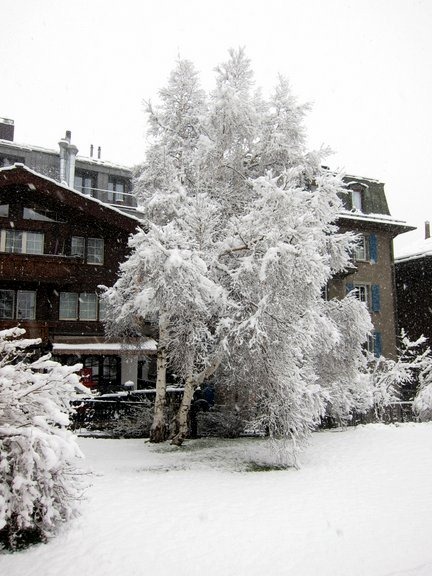 The world around us was just covered, and strangely at this time of the morning (a bit before 9) it was still pretty quiet outside.  I also was able to get my favorite photo from the trip too, on the street that I had posted earlier. 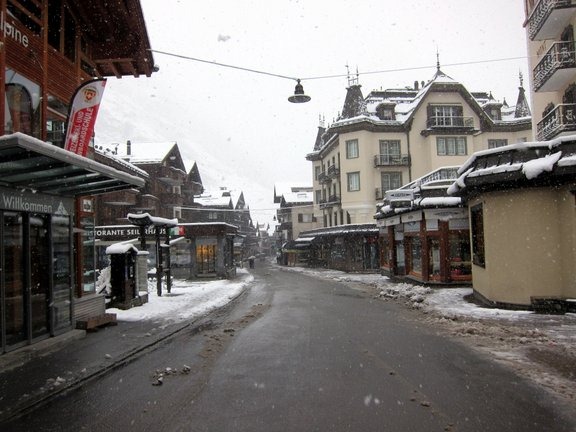 We hit up the rental store to pick up our equipment and made our way back to the tram to get up on the mountain.

If the snow was coming down hard while we were in town, it could have been considered a blizzard higher up in altitude there.  The snow came up to my knees this morning as I got out of the snow, and my skis really didn’t have much lift out there.  If you slowed down at all you just fell over as you sunk down into the snow.  It hadn’t been groomed at all and I wasn’t sure if they did groom these trails. 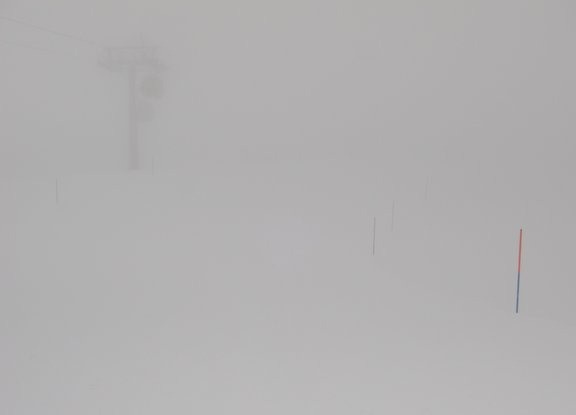 We went up a bit more and as we went out it seemed the higher we went the harder it was to get our bearings straight.  There was no visibility…  If I thought it was bad yesterday out there, it was much worse today.   We were standing there nearly blind as we were getting ready to head down the trail, the sounds of explosions from the avalanche controls still ringing in the distance.  Were they closer?  We knew truly they must have been outside of the area, but with the lack of clear vision, in the back of our heads we still wondered for sure.  Strangely it was great to be out on the snow, but it was less fun as you had to move fast yet at the same time you couldn’t quite see well enough. 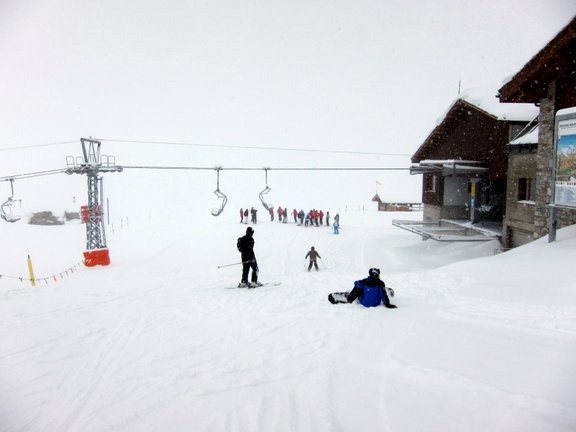 There seemed to be a few spots of visibility but none of them seemed to last long.  The snow was really choppy down on the mountain, and it was so deep higher up on the mountain.  Being my only time out skiing this year I was not in the best ski shape I could be unfortunately, and it was exhausting trying to just get myself down the mountain.  But still there was a part of me trying to both get my time and money’s worth and also just to find the ability to enjoy myself out there for the day. 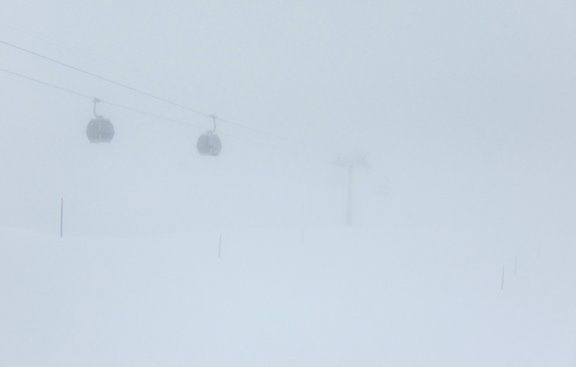 Getting my self down the mountain in one piece became the plan for the day though.  Not exactly ideal skiing conditions to be out there.  The snow itself wouldn’t have been bad overall had it not been for the lousy visibility generally on the mountain.  I think it would be a great place to return one day when I could see where I’m going!  I’m sure it’s absolutely beautiful indeed.

One of my coworkers on the trip headed out early and went to rest up and then there were two of us left.  We split up at one point to take two different slopes down.  I found a few slopes that I really liked and I felt that it was best sticking to those as I was starting to get a bit tired, and wasn’t really in the mood at the moment to push it too far.  We had planned to meet again up again later down the mountain but as I seemed to go in a different direction on one of the slopes (due to following a marker and then realizing I was not where I wanted to be), I ended up skiing solo for the remaining time.

At one point I ended up missing the lift I wanted to get.  I found myself on a different slope heading down and just kept going.  I started going through areas that seemed to be a bit more residential and commercial.  It seemed a bit odd but I liked the fact that you could possibly ski home or to get a break somewhere.  Eventually the ski slope ended though in a way I never expected before. 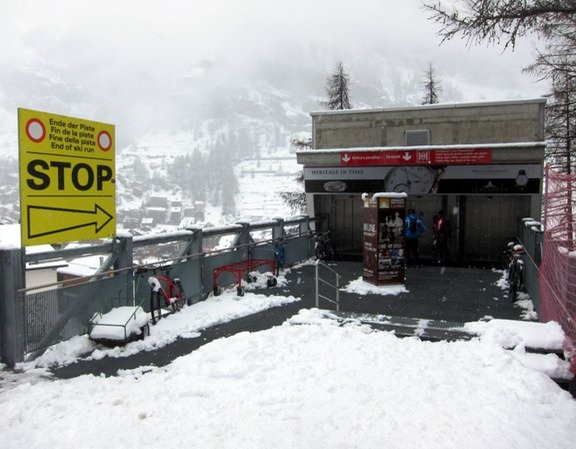 This was definitely the first time I ended a ski slope at an elevator back down to the town below! 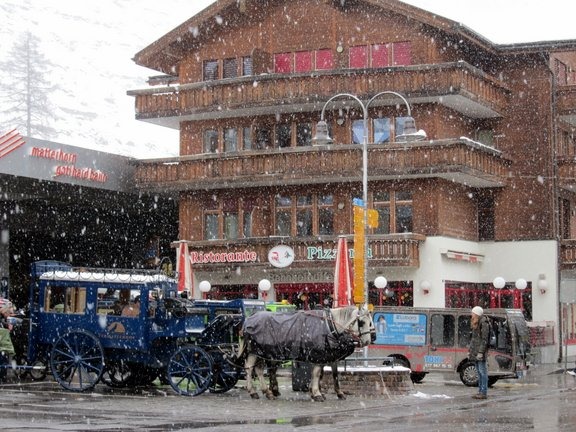 I mostly just milled around town waiting for the rental office to get off their lunch break and to meet up with my friends.  We had to leave Zermatt by at least 15:30 to make it to Geneva on time for our flight but ended up deciding to catch a train an hour earlier.  I think we were all a bit tired at this point anyway, and we didn’t really want to rush through getting back home tonight.  It was just gorgeous being in town though, seeing the horse drawn wagons and electric taxis ferrying passengers around. 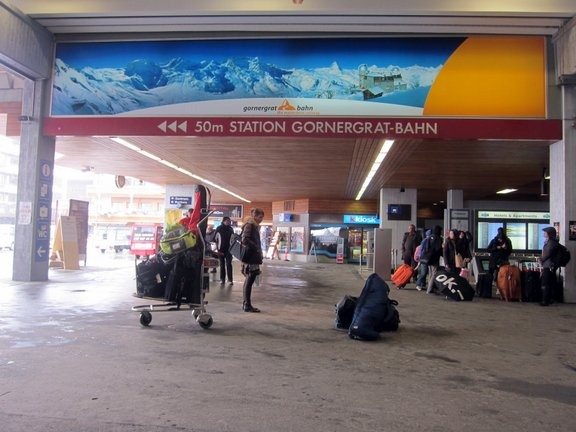 We were lining up with all the other weekend ski goers when it seemed that something wasn’t quite.  People seemed to be feeling a bit more panicked for some reason and were talking among themselves.  Large vans started pulling in to the area outside the station as well, which was odd as usually they don’t have gas vehicles in town.  Finally a train company employee made an announcement in English that the train was broken? or something along those lines and there would not be a train between Zermatt and Tasch.  We’d have to get there another manner of transportation, likely taxi or something. 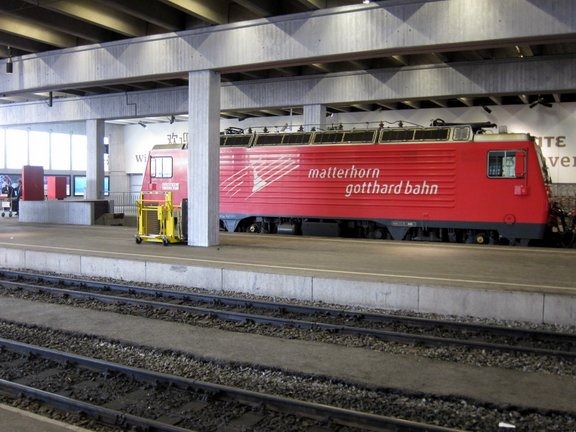 This was when bedlam ensued…  Everyone was rushing back out of the train station.  We were still trying to go and figure out what was up.  Did we have to pay?  How much would it cost?  Would we make our train?  Huge groups of people were pushing into vans out in the area.  It seemed a lot were part of tour groups in the area.  Everyone was trying to negotiate with taxis, vans, on phone calls hoping for answers.  We were not fast enough unfortunately to make it out among the first wave of taxis, so we just waited to figure out what was happening next.

In hindsight I should probably have taken photos of the craziness outside, but it was not the top on my mind.  It was mostly trying to figure out how to get out of town and on my way back.  We needed to be back at work on Monday and it would have done us no good to have missed our train / plane back to England.

At this point we already missed our original train to Visp, so we now had some time to make it to the last train for us back, and we needed to make sure to get out without too much more trouble.  When the second wave of taxis got here we were a lot more prepared.  Thankfully for packing light, we were able to get up close to the van and just get in, we didn’t have the large bags of other tourists who had to try to put there bags in the back of the taxis.  Advantage us.  People were arguing with drivers and each other, everyone was fighting over missing their flights, but we got our seats and we were not giving them back up. 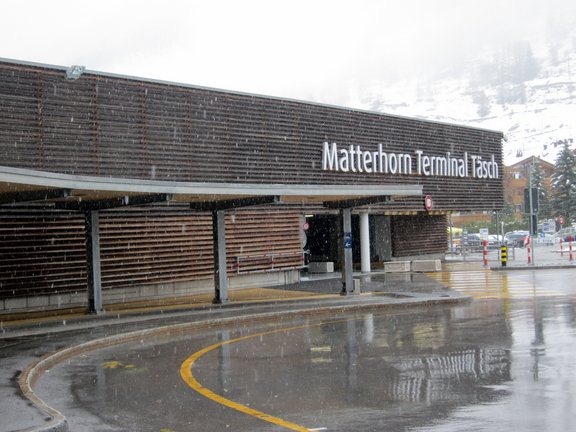 After a short trip we were at the train station and it was at least time to relax.  We had a bit of time now thankfully before the train to Visp and it looked pretty certain we’d still get home on time.  We relaxed grab some food, and just talked to other stranded folks who were unfortunately not as lucky with their timing. 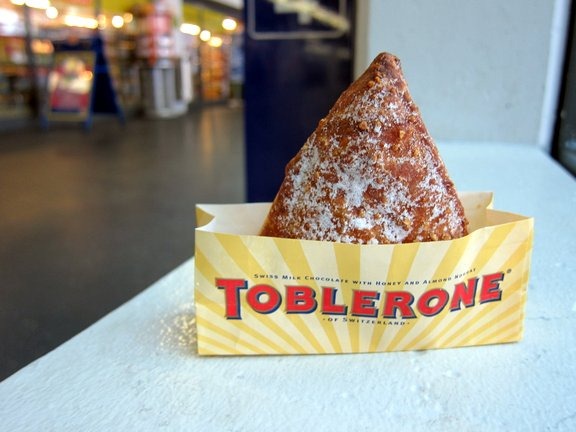 Time to relax, eat and get back to Geneva as easily as possible. The rest of the trip was less eventful overall.  We got to cover a lot of ground on this trip flying into Zurich and then out of Geneva.  Mostly I tried to take some photos with my little camera out of the window (I had to pack really light on the trip) so wanted to try to share one of those below from Lake Geneva… 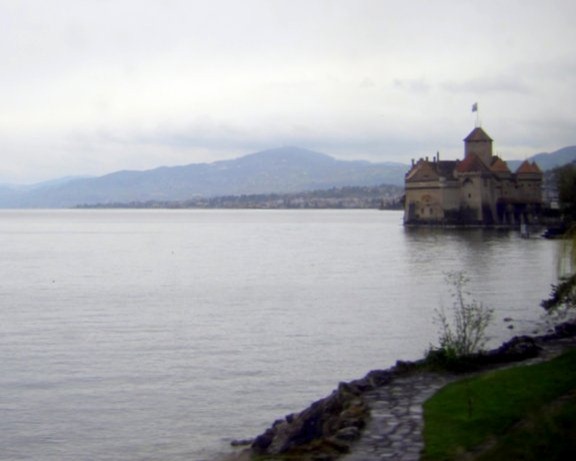 Don’t know what the castle was, but if anyone knows it, would love to learn!

Boulder, located in the foothills of the Rockies, is one of the most … END_OF_DOCUMENT_TOKEN_TO_BE_REPLACED

The Upper West Side, NYC Possibly my favorite neighborhood in the city. … END_OF_DOCUMENT_TOKEN_TO_BE_REPLACED

“Is the gate open today?” “What gate?” “The gate at the border” “What … END_OF_DOCUMENT_TOKEN_TO_BE_REPLACED