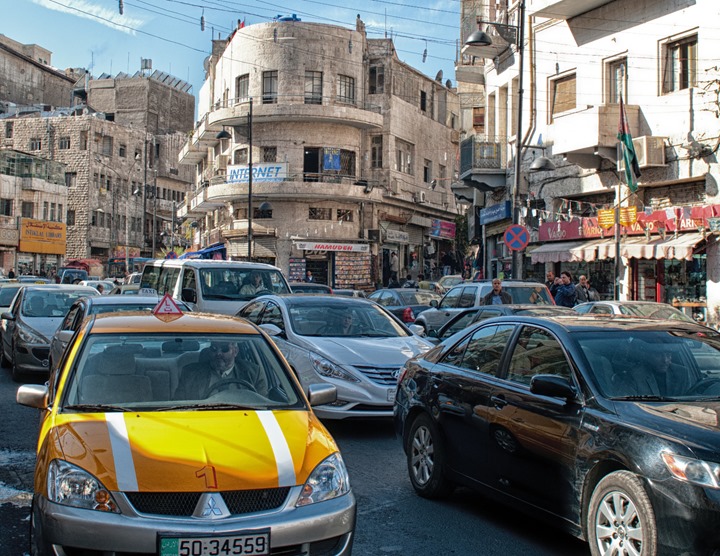 I didn’t take photos of the embassies so I just have a photo of Amman traffic to share.

So wanted to get another story and update on life, love, and study in the Middle east.  Or at least two of the previous three.  Besides regular classes, I’ve been working on trying to get my business visa to Saudi Arabia. On advice I woke up really early to get to the consulate by the opening time as stated on the website.  I had tried to go previously to the consulate but I didn’t realize all work was seemingly done from the rear entrance after I constantly would just look longingly at the front entrance wondering when or if it would ever open.  So after trying to get there early I arrived only to find it closed and a sign mentioning the brand new embassy in another part of the city.

I ended up taxiing to the brand new embassy (it wasn’t there last year in fact) worried I’d be late and stuck in a long line only to find myself the first person there. The guard informed me that I was early and that it wasn’t going to open until 9am…when 9am passed he said perhaps it was 10 and as we approached 10am he admitted he actually really had no idea. He was really interesting to chat with and practice my Arabic. His only English seemed to consist of “I’m in the Army” and “F&#k you Sister”. While I couldn’t understand everything due to a slight lisp and general speed of talking I think I laughed at all the appropriate moments. Other than awkwardly showing me Facebook photos of his travels (that simply consisted of photos of himself only so you actually couldn’t tell the locations) it was an enjoyably relaxing morning.  I started to realize too that I probably just arrived at the consulate too early during Ramadan as well too.
Once the embassy did open I was turned away at the gate saying I was in the wrong spot for the visa I wanted. I think it was my fault for not heeding my friend’s advice and avoid speaking any Arabic. After a bit of an adventure around the city to visit processing centers I got suggestions such as “You should apply for a different visa type”, “You should send in a copy of your Diploma from college”, “It might be easier if you returned to the US and did this”, or “Yea you really shouldn’t bother trying to apply for a visa during Ramadan”. Other than the last bit of advice I can only hope the rest of them are incorrect.

So hopefully trip number two will coincide after Ramadan.  We’ll see if I end up any more successful.
In other News:  Heading to Turkey next week for a little trip.  Should be fun.  I’ve been to Turkey before (Istanbul and Cappadocia) and this time perhaps Istanbul and a few other places.  I have some friends in Istanbul now this time around which should be fun.

I also seem to be kitten sitting for the month.  One of my friends was already cat sitting for a friend and now has a new kitten who was staying on her porch (Due to the two cats not getting along).  So I agreed to watch her for a few weeks since I figured she would be good company.  She tends to be a bit multiple personality and a bit crazy at times and I had to constantly correct text above as she leaped onto the keyboard to attack my hands.

If I had to recommend one trail in Glacier National Park as "must-do", it … END_OF_DOCUMENT_TOKEN_TO_BE_REPLACED

Living in New York City, you realize quickly that things are Expensive. … END_OF_DOCUMENT_TOKEN_TO_BE_REPLACED