One of the most beautiful times to be here in DC is during the Cherry Blossom Festival.  The thousands of cherry trees that dot the landscape came here as a gift of friendship from the nation of Japan in the year 1912 (2,000 cherry trees arrived earlier but were sadly destroyed due to insect infestation).  There is over a hundred years of history with the cherry blossoms here and it brings the city alive with both locals and tourists taking the time to enjoy and view the cherry blossoms.

While nothing quite takes the place of seeing the blossoms in their home country of Japan, if you find yourself in the city during this time of the year, it would be a disservice to not go and view them.  It can be difficult to predict however when they will be in full bloom if you don’t actually live in the area, but if you are, make sure to go and see them in some of the best areas.  Also in case, you didn’t know there are many different varieties of cherry trees and some actually bloom at different times.  One of my favorites is the weeping cherry trees (which can be seen in East Potomac Park and the Tidal Basin).  I tried to compile the areas where to view the Cherry Blossoms around the city.

Probably the most famous place to see the cherry blossoms every year is along the tidal basin.  It is definitely not a secret as you can tell from the thousands of locals and tourists who descend on the basin each spring.  And it is so easy to see why!  It is definitely one of the most picturesque areas to wander and take photographs with the beautiful Jefferson Memorial playing a great back drop.  I know I love getting here early with my camera and tripod to get some photos.  If you do plan to visit, go early or late in the evening.  Although you will find big grounds before sunrise as the photographers all try to stake out their spots for sunrise photographs.

Getting There: Parking in this area can be tough.  There is free parking on weekends at the National Mall and you can easily walk from there.  For Metro access, it is a fairly short walk from either the Smithsonian Metro Station or Metro Center. 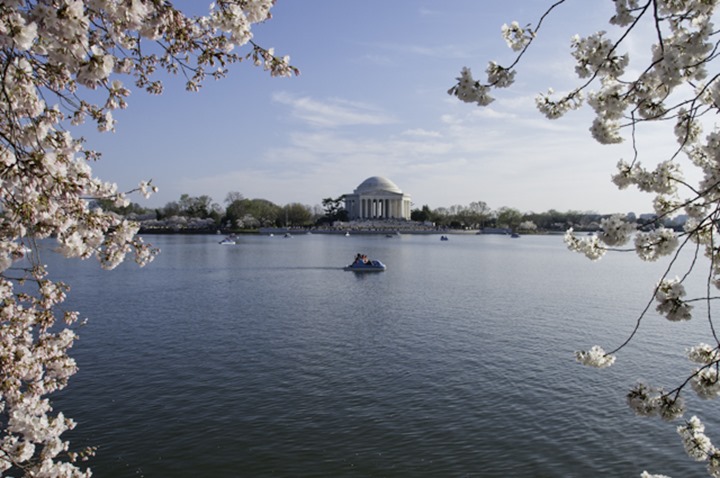 Located behind the Jefferson Memorial is the large East Potomac Park that has over 1700 Cherry Trees.  Definitely worth a visit along with the Tidal Basin and surprisingly not as many folks find themselves out here as do around the Tidal Basin.  I don’t know if that is because they don’t know about them or maybe it is a farther walk than they are willing to do.  Some of my favorite trees can be found in this area, and it is possible to have some more privacy here it seems compared to the hordes of folks swarming the pathways around the basin.  There are more trees too on the West side in West Potomac Park although fewer than here in East Potomac Park.

Getting there: After visiting the Tidal Basin continue on towards the Jefferson Memorial.  Behind the memorial, you’ll see a large park that is East Potomac park and full of all these lovely trees. 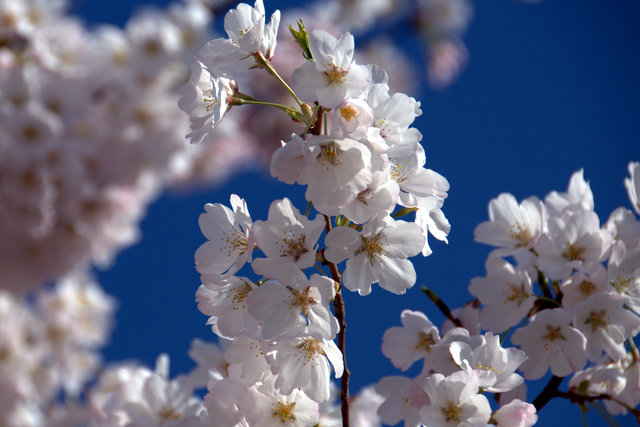 Near the Washington Monument

One of the nicest things about most of the cherry blossoms is that they are generally in the same place.  Over 300 cherry trees are located in the vicinity of the Washington Moment.  Some of my favorite photographs of the trees were taking in this area, as its easy to use the monument in your framing.  There are several groups of trees surrounding the monument and it’s worth taking a walk to see them all.

Getting There: There is free parking on weekends at the National Mall and you can easily walk from there.  For Metro access, it is a fairly short walk from either the Smithsonian Metro Station or Metro Center.  The Washington Monument is still closed to visitors for renovation. 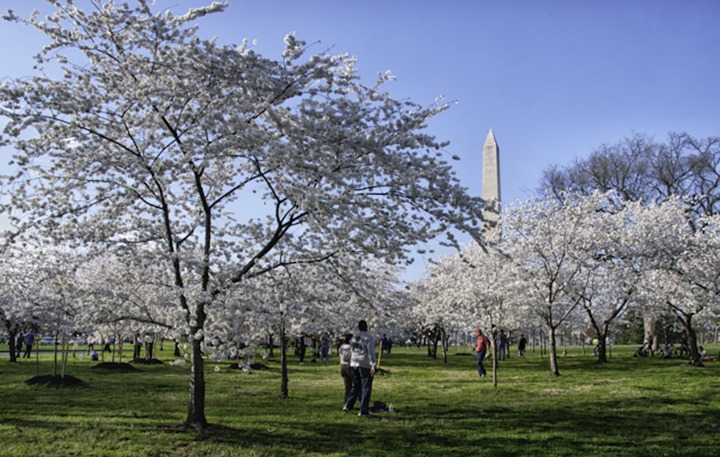 There are not a lot on the National Mall itself but there are surprisingly a few.  I was surprised when I came upon these groups of trees and statues walking along the mall.  It seems everyone was in such a rush to get to the Tidal Basin that only a few people took the time to explore these trees.

Getting There: The group below is to find really as you will see them along the path on the mall between the Korean War Memorial and World War 2 Memorial.  Getting to the National Mall is easy from the Smithsonian Metro Station.  There is also parking on weekends along the mall area. 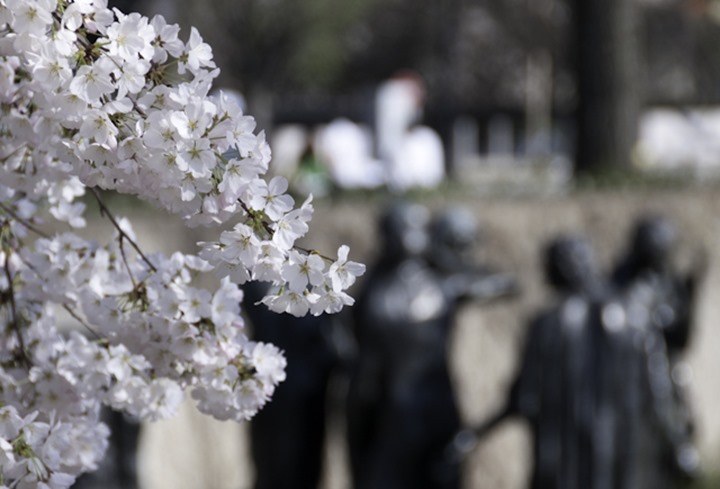 Many of the first trees to arrive in the US ended up here in the National Arboretum.  I read somewhere that several of the original batch from 1910 actually survived when they planted them in the Arboretum to see what would happen (due to the infestation).  Still, a beautiful place to go visit whether during the Cherry Blossom time or not, but definitely worth a visit if you can.  The one downside is that it is not very close to where the rest of the trees are, so you will have to make a special trip up to the Northeast to see these trees.

Getting There:  The closest metro station to the National Arboretum is the Stadium Armory Station and then you need to take the B2 Metrobus disembarking on Bladensburg and Rand Streets.  From there its about 2 blocks to the entrance 24th & R Streets.  There is another entrance to the Arboretum on New York Avenue as well (3501 New York Ave). 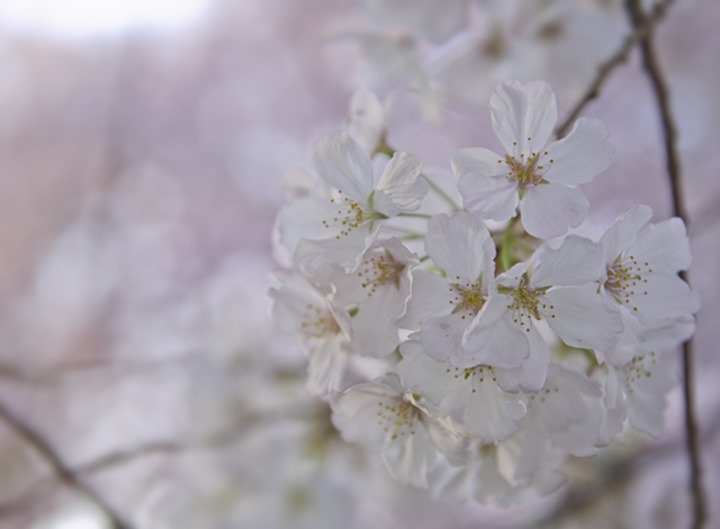 I included the big locations to see Cherry Blossoms but they are not the only blossoms around the city.  There are lots of cherry trees to be found around Washington DC and the suburbs.  You will be able to find several trees in different areas around DC including the Lincoln Memorial and several of the other streets.  Also, many of the suburban areas have blossoming trees too including Bethesda.

One of the best reasons to be here is for all the activities for the National Cherry Blossom Festival.  Held every year there are lots of activities including a parade and also programs put on by the National Park Service.  Worth taking a look at some of the things that are happening.  There is also a photography contest for those photographers out there that you can enter (online).  Check out the official website for details.

The Upper West Side, NYC Possibly my favorite neighborhood in the city. … END_OF_DOCUMENT_TOKEN_TO_BE_REPLACED

Boulder, located in the foothills of the Rockies, is one of the most … END_OF_DOCUMENT_TOKEN_TO_BE_REPLACED

There is something about Serbia. I really can’t put my finger on it but … END_OF_DOCUMENT_TOKEN_TO_BE_REPLACED