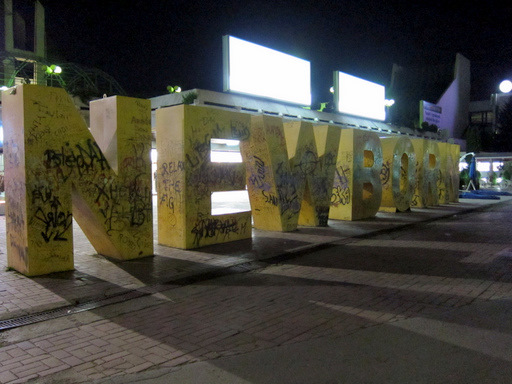 We finished dinner and arrived late at the bus station to await our evening bus to Kosovo.  We both were just mulling around the station.  I had finished up the last few of my postcards and realized there was no easy way to get them mailed back to the states since the post-office was closed.  I had convinced the people working the bus station to take them so hopefully those at home won’t think I forgot them.  God speed little cards. 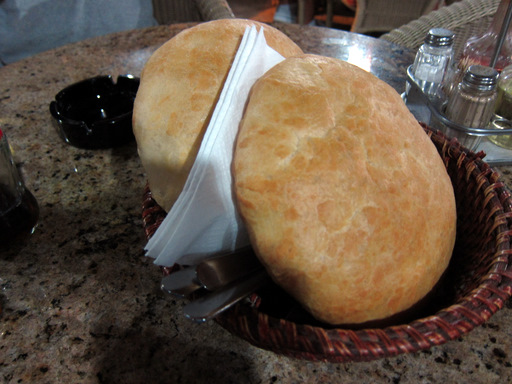 The bus we were to take to Pristina was a bit older but so were a lot of the buses we had ridden while here in the Balkans.  -L- and I made our way to the back of the bus to find some seats.  The bus had weathered seats, a smell of body odor, and what seemed to be an Albanian variety show playing on the televisions.  I had soon wondered if we were going to manage to get any sleep at all on this trip.  We sat back and tried to get comfortable as the bus lurched out of the bus station and we were soon on our way to Kosovo.   We had always planned to at least make a quick stop in Kosovo on our travels around the Balkans.  For both of us it was high on our list, a place we both could only associate with the conflicts we had seen on TV years ago.  Neither of us really knew what we expected the place to be like.

Strangely though we had not intended to go here right away, we were planning originally to head to Albania first and then Kosovo to allow for a shorter distance between our next destinations.  However while it was easy to get to Pristina from Podgorica or Tirana the same could not be said about traveling to Tirana from Podgorica.  To get to Albania we would have had to take a bus to the Ulcinj, a taxi over the border to Shkoder, and then another bus to make it to Tirana…which honestly would have wasted too much time.  So at this point it was either going forth to Kosovo or missing it completely, and neither of us wanted to remove it from our itinerary.  We also knew that we could now not go to Serbia on this trip since travel from Serbia after first entering Kosovo would have been problematic.  Serbia does not recognize Kosovo’s independence so they would have considered us to have illegally entered their country and risking arrest was not high on my travel plans; so in the end here we were bound for Kosovo.

Most of the people were quiet generally on the bus, or at least did not interact much with us.  The trip was going to be long and it seemed most people were trying to get rest while they could.  The area outside our window soon got to be very dark as we started to get out of the city area.  I tried to rest too, maybe get some sleep, but I seemed to be a bit restless tonight for some reason.  Maybe it was the nervousness of going to Kosovo, or maybe it was the strangely addictive Albanian singing on the TV screens, I’m not quite sure.  The world outside got really dark it seemed, and I’m not sure exactly when but we had entered a more hilly wooded area.  I could see a light coming up and I figured it must be the border.  The border guards entered and took our passports (they looked at everyone on the bus, but only took ours since I think we are the only non Albanian or Kosovar folks on the bus).  I always hate giving up my passport, but the soon we got them back with a new Kosovo Stamp in the pages.  We proceeded on, still moving through the woods and mountains.  Occasionally I would notice the bus’s headlights lighting up a UXO sign which represented that there was unexploded ordinance in that area.  Yeah, we are definitely far outside the normal European zone at this point.  I have a vague memory of when we finally arrived at the bus station; I must have finally got a bit of rest on the route.  It was about 430am when the bus pulled in and we wandered into the bus station.  Everyone else seemed to fan out and meet family or find their cars and drive homes and soon we were left with a pretty deserted bus terminal.

We really had not much of an idea where we were in relation to anything else so our best hope was to go and find a taxi cab if there was one available at this hour.  We figured we’d take the cab and gave him directions to one of the hotels we had picked out in our guide book.  We rode through the barren streets of Prishtina unsure of where we were going and trying to get a sense of location.  I knew we probably would have little hope of getting our bearings straight until the morning.  We pulled to the area where are hotel was and got out of the car and wandered over…or at least the place where we thought the hotel should be.  In its place was well the absence of a building…although he assured us he swears it was here recently!  Undeterred we chose another hotel from the book and off we went again to try our luck.  This time at least the place did exist and it look actually pretty good…  We were definitely far more hopeful with this choice.  We were not quite sure about how much the ride would cost, since we had broken one of the cardinal rules of travel negotiating a price beforehand (or insisting on using the meter).  With the additional problem of a language barrier -L- just handed the driver a 50 euro and waved it back as it was too much we believe, so -L- handed him a 20 and we ended up getting 15 Euros back.  That was FAR cheaper than we had anticipated it was going to be.   The hotel had a room available and was able to check us in for the day even though it was 5am (and only charging us for 1 night).  The hotel room was rather clean and modern and had free wifi which was basically everything we could have hoped for.  It was nice just getting a chance to relax before exploring this new city.

I have wanted to go skydiving for years now.  I have no idea why I … END_OF_DOCUMENT_TOKEN_TO_BE_REPLACED