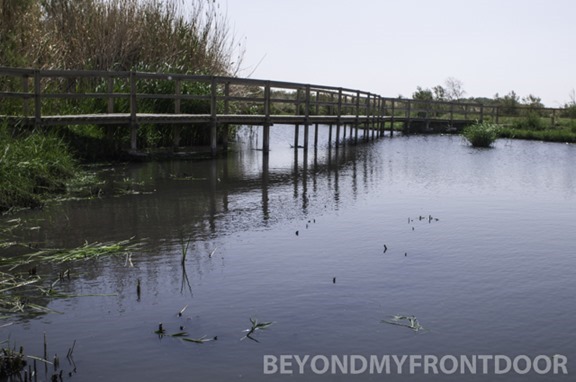 If you told me there was this huge Oasis and wetland out here in the eastern desert I would have thought it was an obvious lie.  How could there be a wetland in this stark, desolate, black rock desert of Azraq.  It seems to go against any normal obvious convention and understanding of the ecosystem of the desert.

Once the size of countries 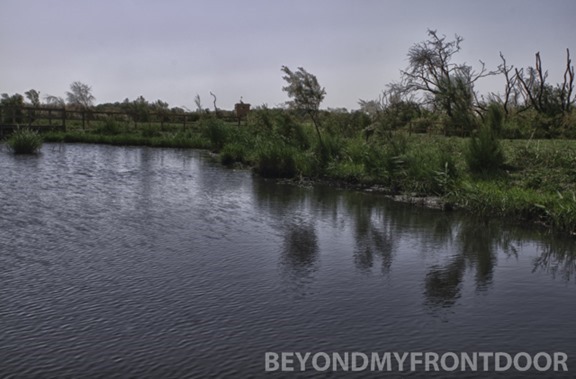 Going from a abandoned black rock village to a lush wetland was quite a shift in place.  It is incredibly hard to imagine that wetlands that once spanned an area the size of the country of Lebanon existed out here in the desert as well.  But it’s true, and now due to water drainage from a growing thirsty population it measures a mere 10% of it’s previous glory.  A wonder in the desert it was called, and in the last quarter century Jordan, a country with very few other natural water sources needed to tap into this water source to feed its growing population and economy. They have been working hard to reverse the trend of decline but with illegal wells and other demands on the water there is growing concern that this ecological wonder may itself become extinct as well. 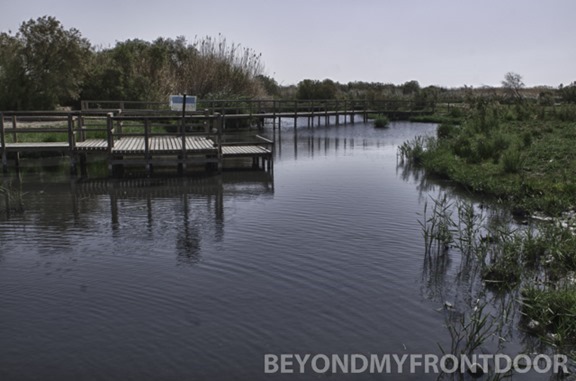 This wetlands used to have a haven for local floral and fauna.  There were wild Oryx, a plethora of birds, and even wild cats at one point.  However most if not all have gone extinct.  The migratory birds have thankfully started returning as they’ve helped to restore some of the wetlands.  There is a breeding program and a reintroduction of Oryx to the parks as well.  The Oryx are currently at the other wetland reserve (Shaumari) which is presently being renovated and is closed for the foreseeable future. 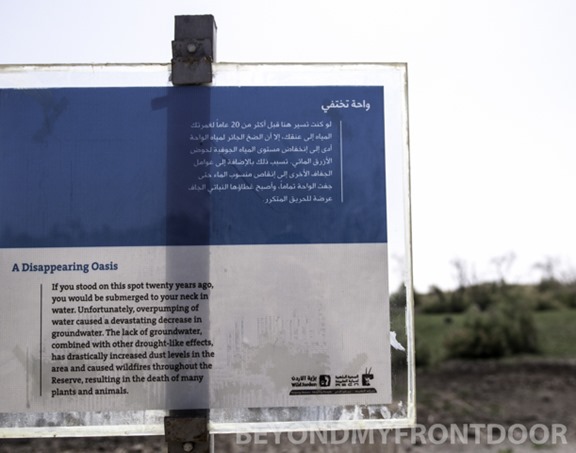 There was a spring that fed the wetlands here that was full of water for many many many years.  However at some point during the usage of the wetlands to quench the populous of Amman the spring that was feeding the wetland dried up.  It was only a matter of time perhaps that the collapse was irreversible and the shrinkage of the wetlands could not overcome the Royal Society for the Conversation of Nature (RSCN) pumping water into it to try to revive the wetlands.  They are still working hard and it is a noble effort indeed, but it is not helped by the fact that over 500 illegals wells dot the Azraq landscape which are working in the opposite direction.  You can hardly blame the population though, in an area that is covered in black volcanic rock, the need for water is high and a thirsty family is not going to be worried too much about the future needs of water when their present needs are great as well.  And so we pray they can manage to keep this wetlands from disappearing forever. 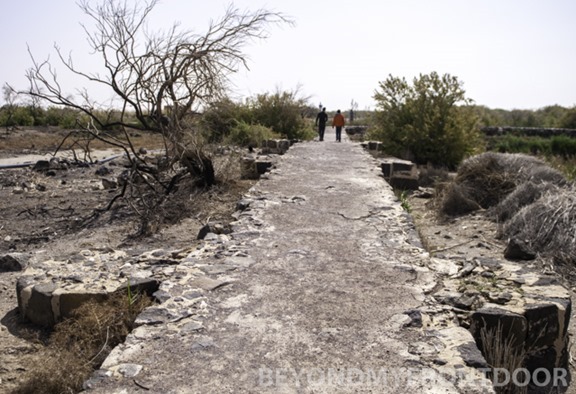 You can see the desertification of the area from the parts where the water has dried up.  There was a certain point maybe as little as 10 to 20 years ago when this entire area would have been submerged under water. 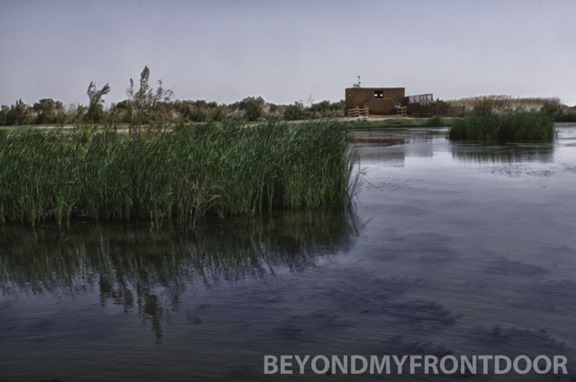 In the distance I could hear some rustling among the reeds and plans.  Supposedly there was a herd of water buffalo that was re-introduced back into the wild.  They were a bit camera shy I suppose as I was having no luck trying to get a photograph of them let alone a look. 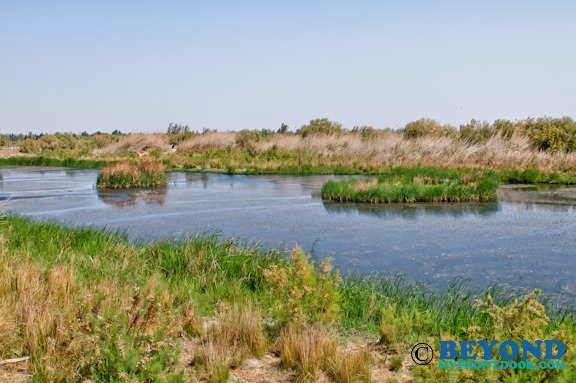 All my other travel mates claim they had seen them and such and would constantly poke fun at me for missing it.  I don’t know if they actually did see them or were just trying to make me feel bad.

Perhaps it was working! 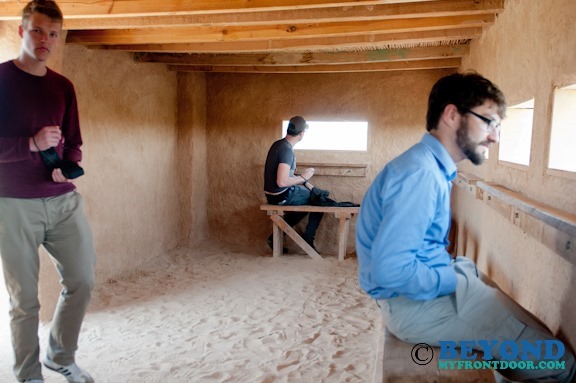 You can also get out there and do some bird watching if you so fancy.  We did see a few birds which –M- wonderful identified for us.  I didn’t realize he was a ornithologist along with being a expert climber.  I don’t think I have the patience necessary to be a bird watcher, my ADD kicked in pretty quick and I was already wandering off to the next things to see. 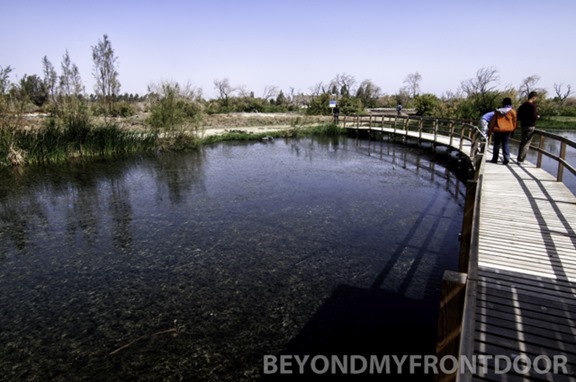 Sadly the actual wetland part of the reserve is fairly small these days.  I definitely hope the RSCN ends up successful in reversing the trend of decline of the wetlands.  Only time will tell though, so do schedule your trip in case these wetlands go extinct.  It was definitely something I had read about but something that I was a bit confused about it’s actual existence prior to visiting.  Ahh what it would have been like to see it in it’s former glory.  Much of the population used to gain their living from various enterprises extracted from the wetlands here.  I’m not sure how much it supports them these days however.

Also make sure to check out Part 1, Part 2, and about the Abandoned city as well if you haven’t done so yet.

Getting to Azraq:
The wetlands are located on the outskirts of Azraq along route 5 about 1:40 minutes from Amman.  Getting there is easiest by car or bus.  There are tours that take you to Azraq as well as we saw several tourists in the area. 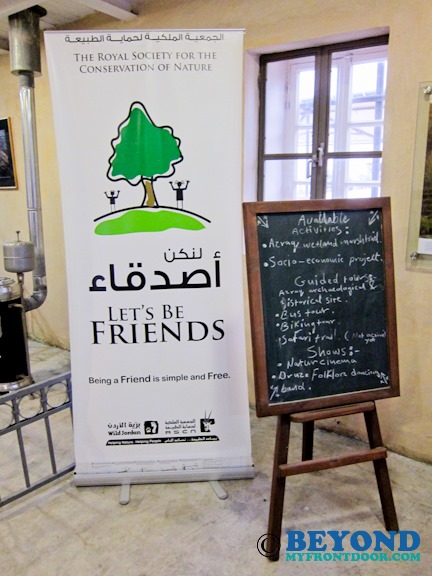 Discount:
You can also become friends with the RSCN and why not…. it’s free!  And free friends are the best kind.  I don’t know if it’s the kind of friend who constantly calls hoping you will come back and visit or not, but it does give you a small discount to entry.

Other Wetland Reserves:
There is also the Shaumari Reserve which at the time of our visit was closed due to Renovation.  Shaumari currently has several Arabian Oryx that are otherwise generally extinct in the wild (there has been a breeding program going on in Arizona for several years and a few were released into Wadi Rum to umm…not so great results).  If you visit there please stop back and let me know what it was like.

Any other questions, comments?  Let me know!

So you are Looking for the Best Things to Do in Denver? As someone who … END_OF_DOCUMENT_TOKEN_TO_BE_REPLACED

There's quite a few Volcanoes in the United States, and one thing I learn … END_OF_DOCUMENT_TOKEN_TO_BE_REPLACED