So just to let people know that we are still alive and well!  Things here are fabulous, a little tired, but relaxing quickly and I cant imagine that I haven’t even started work yet so my trip has really yet to begin.

So we awoke early from our hotel in Goshogawara, content that the main objective of our trip (seeing the house) was complete.  We decided to take a stroll through the quiet town to find ourselves some breakfast.

Oddly enough we ran into another set of Americans with the same objective so we all sat at the same table and started chatting.  They were a couple folks visiting the location that Tom will eventually be working so it was quite fortunate to meet them and get a chance to talk about work and the site and everything.

We parted ways, checked out, and started to look for a way to get to our next destination of “somewhere on Hokkaido”.  Since completing our main goal much of the rest of our trip fell under the general direction of pointing and saying…lets go somewhere that way.  We figured our best bet, or at least most interesting one would be to try to take a ferry from Aomori to Hakodate in Hokkaido.  Now we arrived in Aomori in the early morning and Aomori isn’t really much of a city to look at.  It has a beautiful harbor, and nice coastline (and very fresh air) but the town itself is a bit blocky, concrete, and drab.  However to be fair unlike Tokyo and it’s suit and tie atmosphere, Aomori seem to be have a bit of a neigborhood-ish feel to it, it really seemed that people lived and grew up there, something I really found rather pleasant.

We figured we had no reason to stay in Aomori very long so we would at least wander around a bit, try to locate the ferry docks and get some lunch.  We walked about and saw what we figured was the ferry, it was close to the train station at least.  It took us about 20 minutes to realize that the memorial ship there was well not going to be taking us anywhere anytime soon.  It wasn’t until we actually bit the bullet and got directions from the travel information that we realized we would actually have to take a taxi to get there and no amount of wandering around aimless searching was going to rectify that.

There are several ferry companies that service Hakodate, most have a 4 hr ferry ride and one has a 1.5hr express ferry, however it seems since none of them run at the same times, you basically have to take which ever ferry is going to be leaving next, which in our case was one of the 4hr ferries.  The price of the ferry was quite reasonable at about $17 dollars a person, much cheaper than I expected!  We departed the ticket booth and walked towards the ferry…the umm…ferry…which one is it?

There were two ferries sitting outside, one seemed to look like an actual ferry, and the other was having large trucks drive into its belly.  We choose the latter since well it was closer.  We proceeded to walk towards one of the men standing outside of the boat to ask him if it was the right vessel, he took our ticket, ripped off a piece of it and went back to his duties of watching the trucks pull in…  “Well I guess this is the right boat”, I said to Tom.  “Are you sure?”, he inquired.  “Well they did take our ticket.”  The inside of the boat was a large cavernous room that was quickly filling with trucks and nothing else.  I really hope we aren’t stuck hanging out down here.

Alas no we weren’t destined to bunk with the cargo, there was a small staircase that arose to the deck above.  We surfaced and what we saw honestly did little to assuage our fears.  This ferry seemed to have all the amenities and conveniences of a cargo ship.  The upper deck consisted of a large metal deck and a bunch of vents (so i guess the truck drivers wouldn’t die of suffocation or something), and a lot of off limit areas.  Tom was half joking we were probably going to end up as slaves on a ship to china instead of actually getting to Hokkaido. 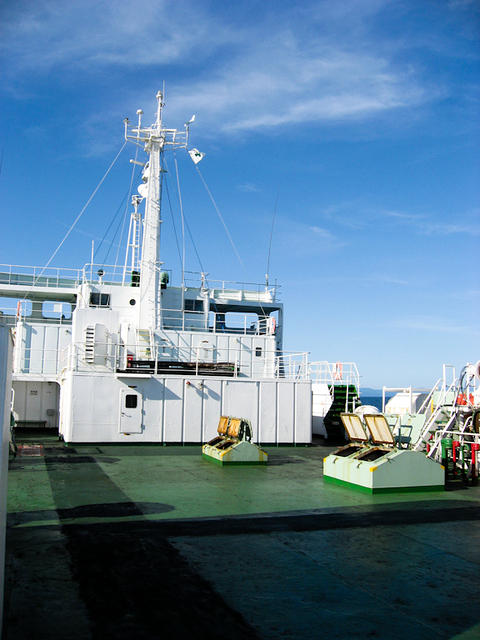 We searched around a bit more, found an inner area, with a small carpeted area, a few pillows, a couple vending, and a small tv set.  Ok…looking somewhat better. It wasnt until soon after when a mother and daughter who seemed to be dressed more for going out in the city than riding an industrial ferry appeared on deck too.  They were later joined by another 5 or 6 passengers taking the same trip across as we were.  Thankfully the weather was beautiful, not too hot or not too cold, we spent much of the time sitting on the deck watching us depart port.  It would have been far more idyllic if it wasn’t for the nasty fumes from the engines that I swear probably reduced my life expectancy by a year or two.

We pulled into Hakodate as the sun was beginning to set.  We found our hotel, checked in and decided to try to go see something in the city.  Hakodate has two main attractions, a morning market, and Mt. Hakodate (334 meters) which gives you a great view of the city below.  To reach to the top of the mountain there is a lovely touristy cable car that brings you to its summit….well it brings you to the gift shops and restaurants with a viewing deck on top. 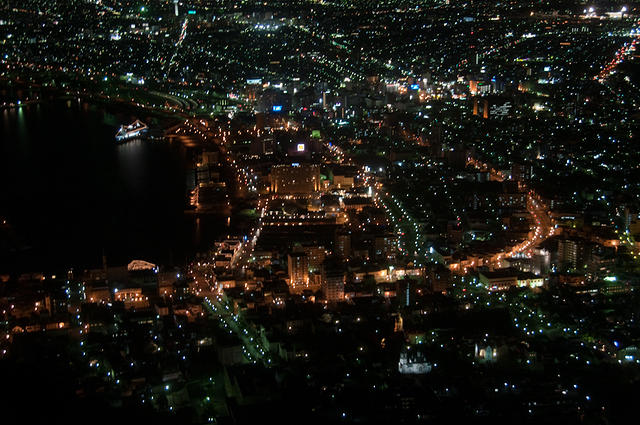 It was a really lovely site, lots of couples enjoying the romantic view below, lots of teenagers and families taking flash photos and looking confused why none of them seem to come out (you could actually see the flash firings from the ferry).  I think I was a bit worried tom might try to have a moment and try to get me to hold him haha.  just kidding, don’t know if Tom will find that last comment all that funny. 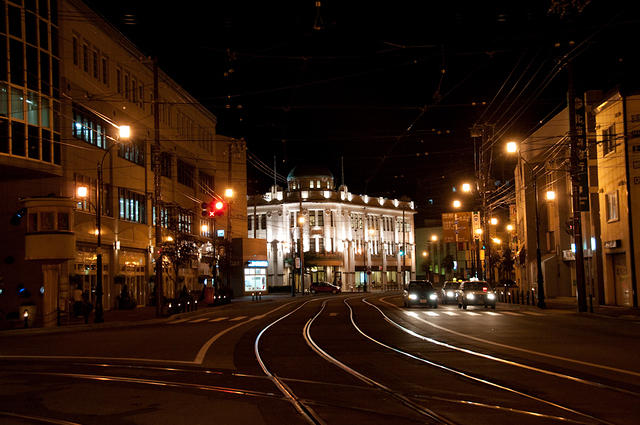 It was about 930pm when we found ourselves back down near the train station desperately looking for dinner.  Hakodate is also no large southern city, it was very much a ghost town at this time of night.  We were basically desperate for almost anything now.  We found an open seafood restaurant, where again they spoke no English, yet somehow sold us on a set dinner.  Nothing like getting a dinner where you aren’t sure what you are getting or how much of it you will have either! 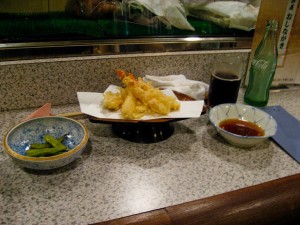 Its a surprise at every course.  They brought us out some edamame to snack on, a few tempura crab legs (Hakodate is famous for their crabs), and then a dish of something that appeared to be conch sashimi.  It had the slight appearance of octopus but a lot tougher to chew.  We desperately waited to see what was next, as we were both still starving, and we soon quickly (30 mins later) realized that that was the whole meal.  it was ok but clearly not $20 worth.  Not wanting to continue to order here (since we still didn’t know what we could even order), we wandered the streets trying to find another place we’d both agree on before finally settling for noodles and sandwiches from the local 7-11.  Mission complete, hunger abated.

The next morning we awoke late and checked out and made our way to investing the morning market and eat.  The morning market was a fun sight, mostly seafood sales, lots and lots of crabs.  The crabs themselves were incredibly expensive, some upwards of $100US which to me is a lot to pay for a crab, no matter how tasty it might be.  I don’t know who all the people who were purchasing these were, but it seemed to be a very lively market indeed. 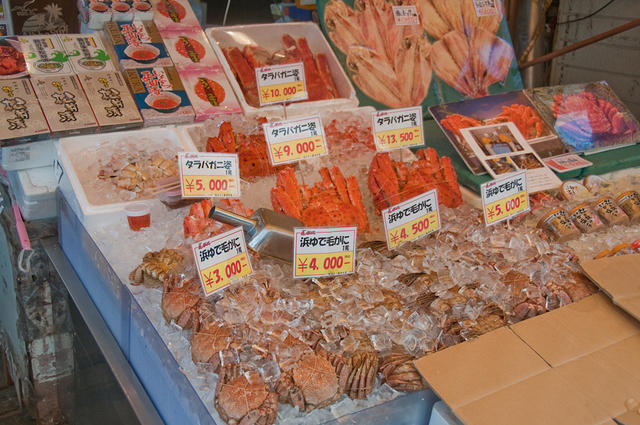 That’s some high priced crab there!

Over breakfast we decided the best course of action might not be to explore more of Hokkaido, as much as it pains me not to see more of it, we don’t really have the time and it would make sense to see things back on our way to Tokyo, so we figured we’d try to get to Nikko today and see it tomorrow.  Well plans changed again along route when I realized we’d arrive in Nikko after dark and waste an entire day just traveling.  When our train stopped in Sendai we decided to make ourselves a little detour and see Matsushima.  Matsushima is considered (according to my tour book) to be one of the top scenic sights in Japan, so it would be terrible to miss if I’m already in the area.  Matsushima consists of many small islands dotting the bay covered in pine trees.  Unfortunately we arrive not long before sunset and quickly saw what we could before daylight was taken from us.  Honestly not the best thing I’ve seen so far in japan but it was lovely in its own right.

With darkness settling on us, we decided the best course would be spend the night in Sendai instead of trying to venture anywhere else.  Of course as usual we still don’t have a place to stay in town so that would have to be our next course of action.  I didn’t know what to expect of Sendai, I mean it’s not even mentioned in my tour book, but it is surprisingly larger than I had expected it to be, and a lot busier too.  We really didn’t know what to do, so we locked our bags up and started looking for an internet cafe, but no luck, probably cause we really weren’t sure how we were going to locate one.  We walked into the nearest hotel (comfort inn) that we saw hoping maybe they had a reasonable rate available.  No luck….all booked.  “Well…umm do you guys have internet in the lobby area that we could use?”  “Sure it is just over that way”…. Score!  So we basically proceeded to use the Comfort Inn Internet terminals to find and book ourselves a room at a nearby hotel, the Hotel Metropolitan Sendai.  We really got lucky too on the room, it is honestly the best room I’ve stayed in during any of my times in Japan (and much cheaper than most of them), and one of the better ones i’ve ever stayed in overall.  Two nice beds, a large plasma tv, a beautiful bathroom.  You know I really never could appreciate a good quality bathroom until I took trips over here to Japan, if other societies can learn something from the Japanese, it’s how to build a quality bathroom.

So just resting up at the moment, tomorrow heading to Nikko to check it out for a few hours, then off to Tokyo to check in, and get ready for work and back to as close to reality as I’ll probably get during these few weeks.  Probably wont hear as much from me during that time, but I hope everyone is well!

One of the newest National Park administered monuments. Katahdin Woods and … END_OF_DOCUMENT_TOKEN_TO_BE_REPLACED