I figured that while I had a few full days in the former Yugoslavia I would take the chance and see as much as I could on my list.  One of those high on my list of places for a while was to get over to Plitvice National Park in Croatia.  It was going to be a bit of a hike, but I wanted to go so I figured I would spend Saturday in Croatia, come back for the day to Ljubljana on Sunday to get a few more sights around there and then off overnight to Budapest.  It was a bit condensed of a plan but it at least sounded good…  But as often is the case, things didn’t work out the way I had planned.

I checked out of my hostel in Ljubljana early and took the 630 am train to Zagreb (2hrs away).  I checked into my hotel and began walking towards the bus terminal.  The weather was too nice to get there by bus or tram, walking just felt good. 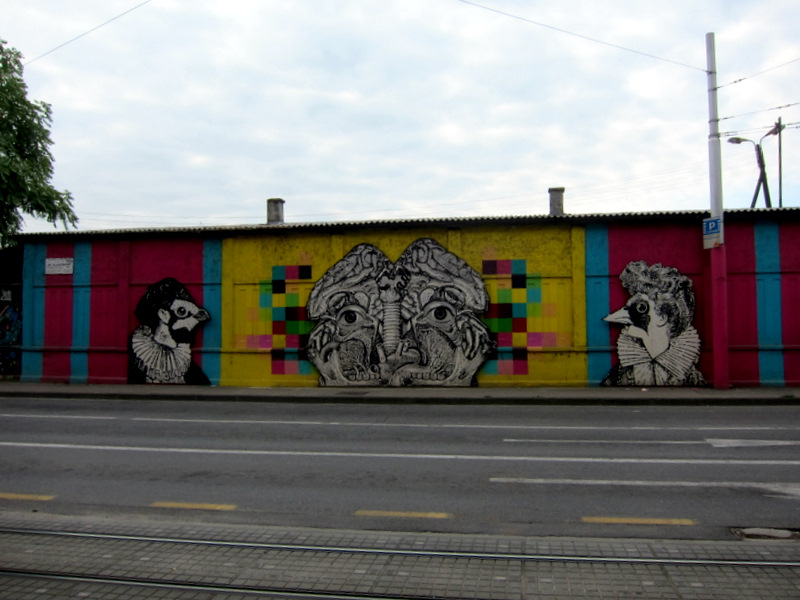 The road to the bus terminal, and some of the street art in Zagreb 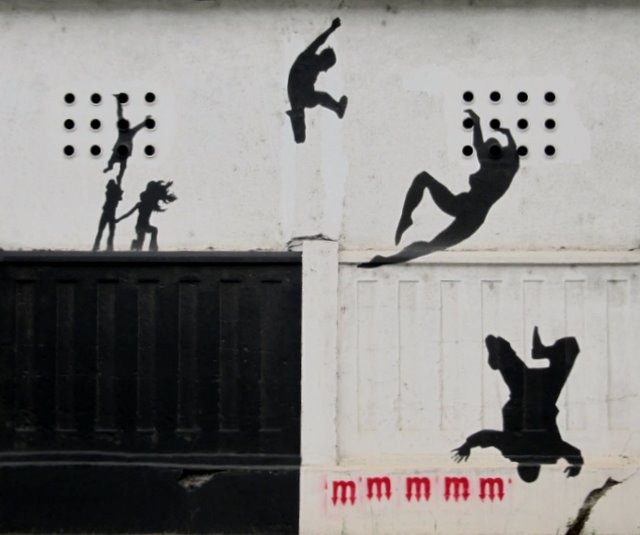 More of the Street Art on the way to the bus terminal in Zagreb, Croatia.

I got to the bus terminal, bought a ticket from Zagreb to Plitvice National Park and relaxed waiting for my bus. The bus station itself was a very clean and rather modern looking building.  I imagine it wasn’t very old at all. 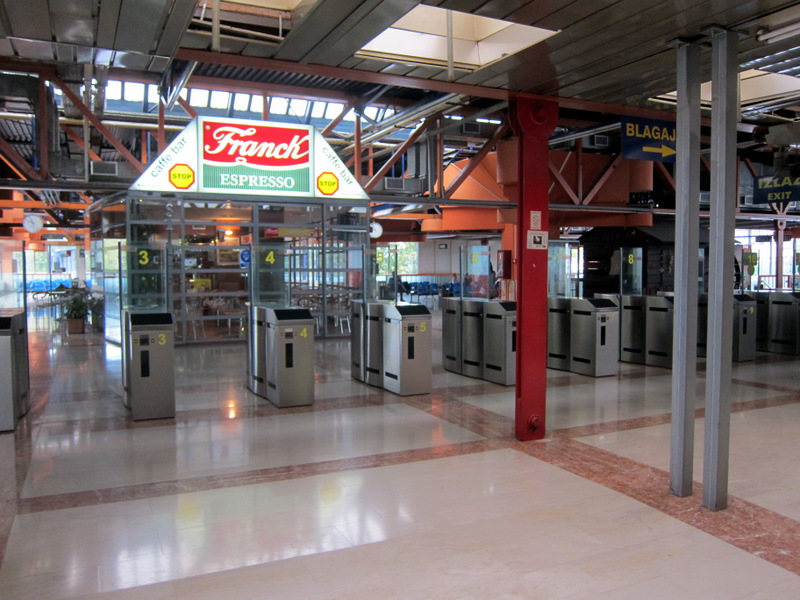 The bus terminal in Zagreb. I dont know why those gates are there, they didnt seem used for anything.

The way there was nice, relaxed taking photos along the way, napped a bit.  I was really excited to finally get to Plitvice.  I had seen Krka last year and I knew Plitvice is supposed to be much nicer. 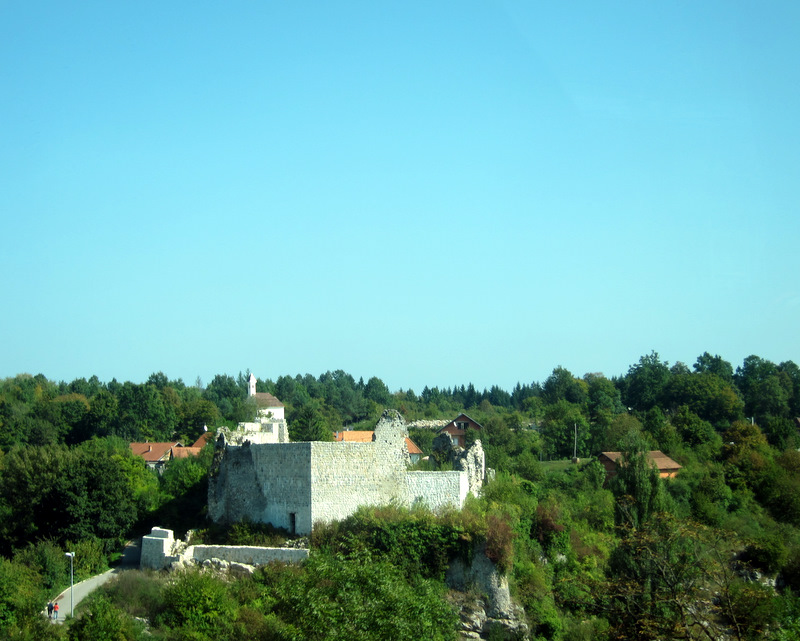 Scenes from the bus ride to Plitvice National Park. I really wish I knew what that fort or building was.

The park itself is fairly large.  There are two main areas of the park, the upper lakes and the lower lakes (divided by a large lake in between).   I figured I would explore the lower lakes first for no important reason and headed off in that direction. 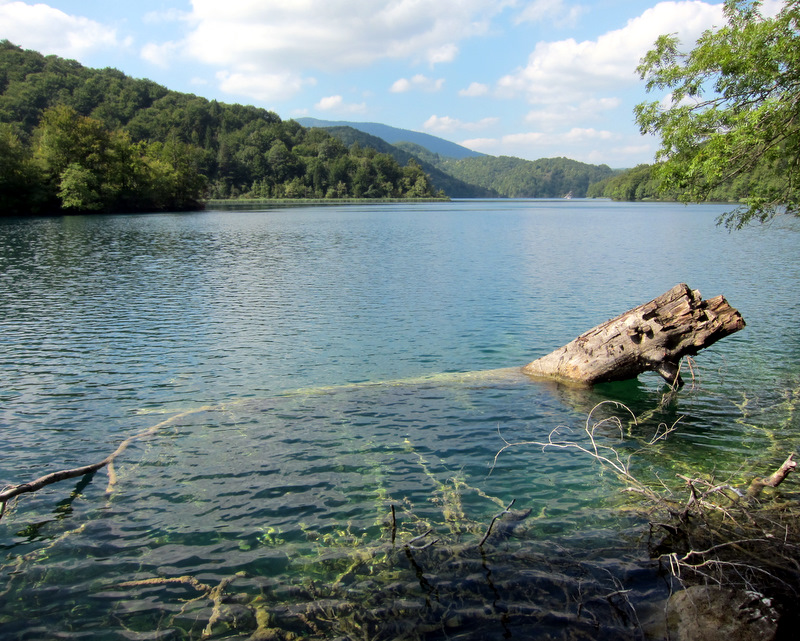 The lake between the upper and lower part of Plitvice National Park. There was a ferry connecting the two areas, but I figured I would walk.

The park was crowded, making me wish I had gotten there earlier.  People everywhere, mostly from tour groups as I could guess from the matching stickers on their shirts.  I spent most of the time trying to avoid getting knocked over by mobs of folks trying to crowd the boardwalk around the lake area.  The lakes themselves were beautiful, waterfalls, etc, but nothing really looked different from Krka and certainly not better yet. 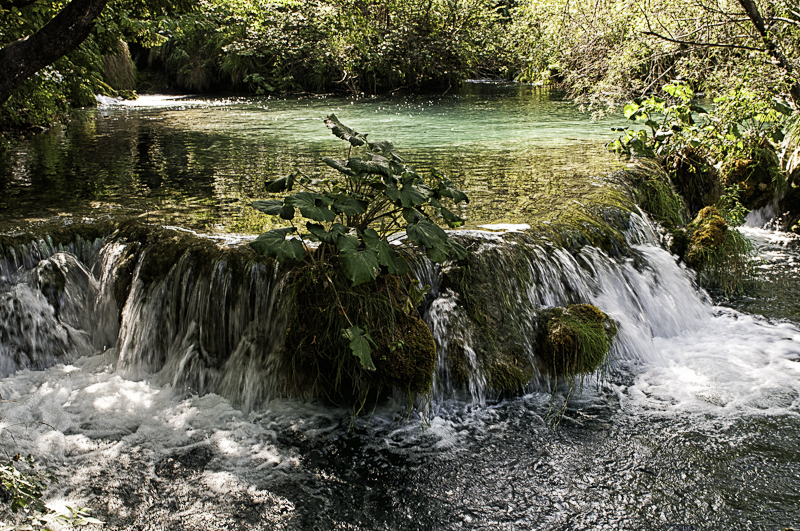 A photo from the lower lakes of Plitvice National Park

I made my way to the large waterfall got the required photo in front and then that is when the problems happened. 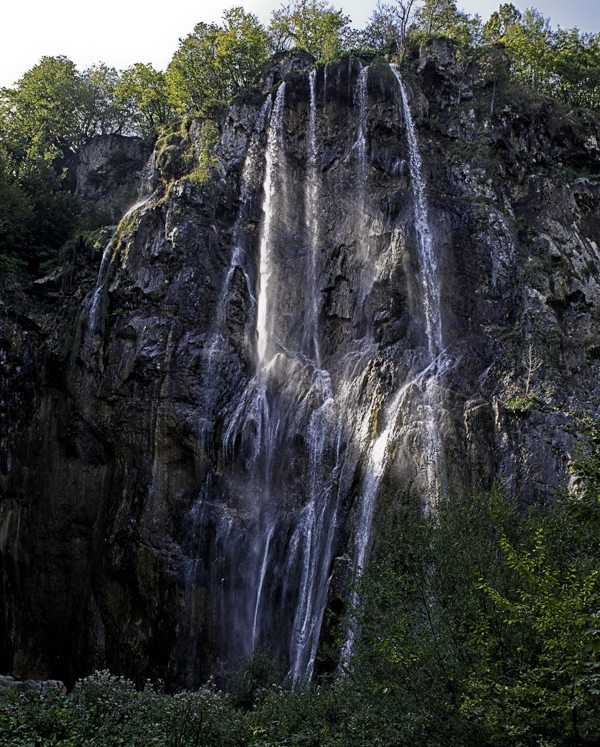 As I was trying to get out of the way of someone else who was getting their photo taken my foot caught something, twisted, and I went down hard.

A few expletives escaped my mouth.  Or at least I think they did, if not they really should have, because it hurt.  I was down for a bit, a few folks walked up and asked if I was ok, and I just sat there staring, thinking, and contemplating.  I was able to finally get myself up with some help I was able to shuffle my feet a bit forward.

Hmm well doesn’t feel like anything is broken…I hope.  But either way I was basically done for the day.  I had tried to think if I was able to make my way to the other side of the park to see the upper waterfalls (yes I’m this stupid), but no thankfully I thought better of that even if the book and everyone says that’s where all the best stuff is.  Damn…ok now it’s time to see if I can move and get back to Zagreb.  Slowly I used a combination of sliding my feet, limping, and hopping to get myself back to the bus stop.

It was probably about an hour until the next bus and I’m hanging around when a local Croatian started offering a shared van ride back to Zagreb for 100 Kuna and I was in, but it would require at least 5 more people.  Well I’ll take whatever will leave first at this point, I just want to get back, wash up, and start to figure out what to actually do.  Well apparently everyone wanted to go, all 10 of us waiting at the bus station.  He even offered us a discount of 90 Kuna (now cheaper even than the bus) if we all went.  There was enough of a language barrier between everyone that it was easier to just agree and see how it goes.  So there we were all piling into the van, 8 Japanese tourists, 1 Korean tourist, me, and the driver.  It was going to be a fun ride.  At least all of us were pretty skinny so the fit wasn’t too bad, and everyone was very helpful with me and gave me a nice seat since I was injured.  I spent much of the time chatting with the 3 older Japanese ladies trying to impress them with my 15 words of Japanese and my random travels through their country.

We got back to Zagreb in about 2 hours and the van driver left me over by the train station which was fine.  By this point though, my ankle had swollen further and the walk simply across the street to my hotel was virtually unbearable.  I got inside, got some ice from the bar, and headed up to my room to take stock of my situation.  I had several cuts over my hand, a large scrape on my leg, and of course my ridiculously swollen ankle and foot.  This was not a good place to be.  I started worrying about how I was going to get home.  How I was going to get my stuff across the street even tomorrow to catch a train.  How I was going to get food, etc.  This really really sucked.  It was nearly the end of my trip and yet this was the first time I had truly felt alone.

If you want feel free to check out Part 2

Did you know Ohio's Place in Aviation History? The Dayton Aviation Heritage … END_OF_DOCUMENT_TOKEN_TO_BE_REPLACED

The Jewel of New England, Acadia National Park offers some of the most … END_OF_DOCUMENT_TOKEN_TO_BE_REPLACED

If I had to recommend one trail in Glacier National Park as "must-do", it … END_OF_DOCUMENT_TOKEN_TO_BE_REPLACED