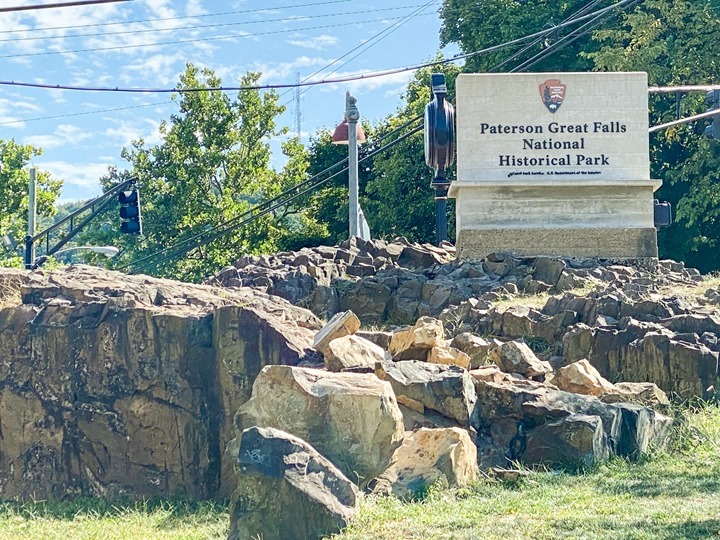 I had no idea of its place in American History. Founded by Alexander Hamilton (of Broadway fame), Patterson, was the first city in the US founded specifically to be an industrial city. This is the reason that this park, the Patterson Great Falls National Historic Park was commissioned in 1976.

Soon after becoming the first Secretary of the Treasury, Hamilton started to push for more industry to grow in the now nascent republic. As part of that strategy he helped found the Society for Establishing Usefull Manufacturers (S.U.M.). It’s mission led to the purchase of 700 acres to be used to found the city of Patterson (named for the then Governor of New Jersey William Patterson). I’m sure that played some way into his support for Hamilton and the enterprise. 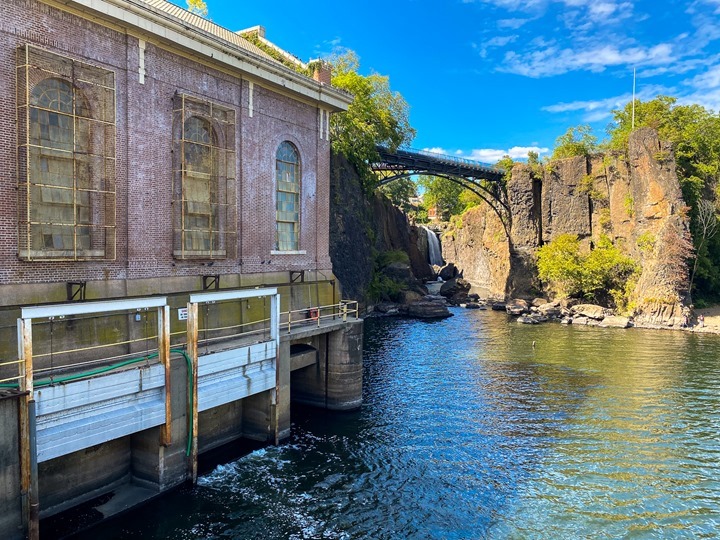 The river and hydro power potential of the area provided a perfect plan to use the water to power much of the early industry. However, due to various different set backs from foreign competition and others, the city had many ups and downs over its history. During the late 19th century, the city reached its peaked with Silk Manufacturing and even earned the nickname the “Silk City” during that time.

While the organization that founded it never fully achieved its original goal and the land was sold to the greater city of Patterson, the city itself continued to grow and prosper in other ways. One of the fascinating parts is that the River system as well as the raceways (which are used to direct the water to various mills, etc.) are considered an engineering marvel and one of the main reasons for it’s historic and cultural importance to be a National Historic Park. 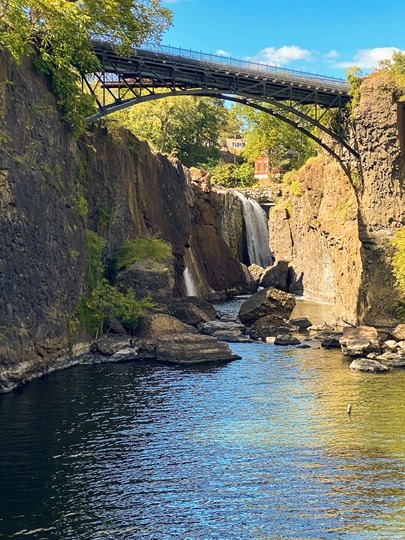 The Park itself is set over about 100 or so acres. Much of the park includes the river and waterfalls that cut through the park and give its namesake “Great Falls” name.

In terms of size, most of the area isn’t necessarily easily accessible. They require you to stay on or close to the paths that traverse the park. You can walk down to the river and to some small “beaches” that dot the area along the water. Because of the falls (which is one of the largest in the eastern US), going into the water is also prohibited.

There is a path across a bridge to see some of the smaller falls as well as to get views from above the waterfalls and river. Mostly there are a few benches and some historic buildings and a few places to sit or picnic if you prefer. 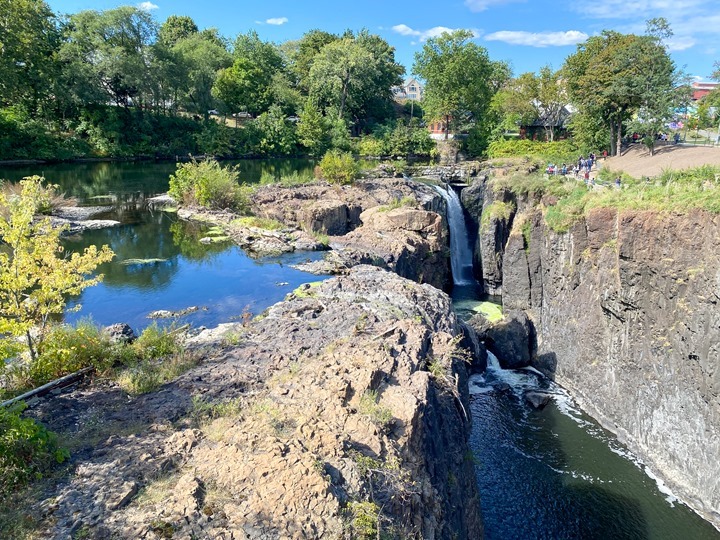 There is a visitor’s center available for the park as well. While generally open, due to pandemic it is currently closed. During days of high traffic, Rangers set up a table outside for park information. If you collect cancellation stamps, be sure to visit on a day when they are outside so you can procure your stamp.

In terms of visiting, it isn’t the most exciting park to visit, but worth a trip for the waterfall and especially if you are in the area. It’s nice that this park preserves this history and nature so close to some larger urban areas that otherwise would have swallowed it. But in terms of things to see, don’t expect it to take more than a couple hours to get a feel for the area. 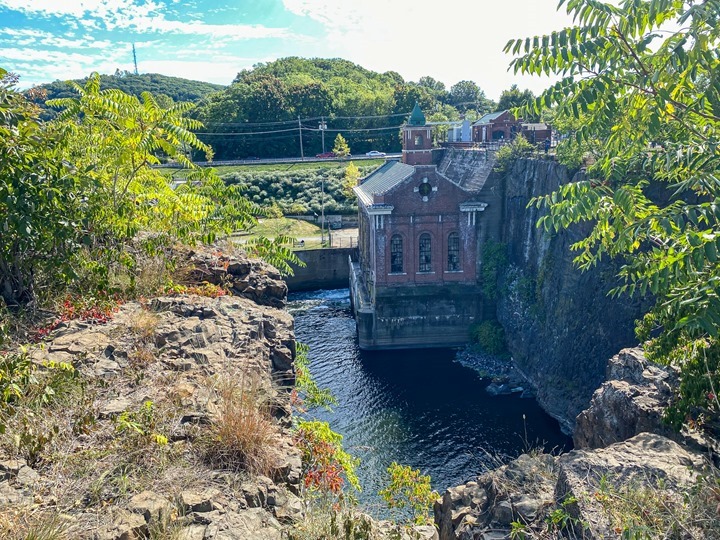 Operating Hours: Open Daily from Sunrise to Sunset
Location: 72 McBride Avenue Extension – Paterson, NJ 07501
Fees: Free!
Visitor Center: At the above location. However it is currently closed. During weekends there is an outside booth that provides information to guests (and the cancelation stamp for those who collect).
Parking: There is a parking lot and a weekend overflow lot. During weekends of good weather, these can fill up fast, so plan accordingly. I found though that they do a good job of managing the parking lots actively.

Cancellation Stamp: At the Visitor Center (or outside ranger booth) 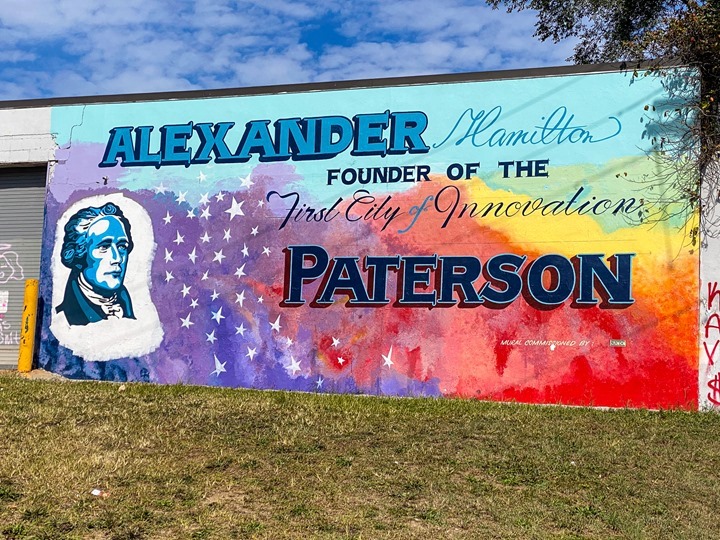 The way down was fairly uneventful for us. Whiskey seemed to reprise his … END_OF_DOCUMENT_TOKEN_TO_BE_REPLACED

An old city injury requires an old city solution. Or at least that sounds … END_OF_DOCUMENT_TOKEN_TO_BE_REPLACED