Me: So my luggage didn’t make it here to Vilnius.

Baggage Desk Guy: Well according to our records, it seems you should have been on the earlier flight.

Me: Well shouldn’t that mean it would have been here already?

It’s midnight in Lithuania and this has not been one of my better flights.  It started out well, getting to Dulles, checking in, getting to my gate, and then the waiting happened.  Delays here, delays there (a few times I think they delayed us just for the hell of it), but each time it was short enough that  you were like, no worries I’ll still make it.  And then finally they delayed it enough that there was no way I was going to make my connecting flight from Ottawa to Germany so now I needed to reroute my flight…ugh.  Making some phone calls I was able to route through Munich and Frankfurt which apparently was the best option BUT it would add 12 hours to my flight….didn’t I say ugh?

I checked into the Lufthansa gate to my flight and they were just starting to board a different flight to Frankfurt, which would have been perfect.  Apparently it would be against the “rules” (damn rules) if I was switched to this actually convenient flight that would get me to Germany in time to make my real connection.

After spending some quality time in various Lufthansa lounges I finally arrived over in Vilnius, late, smelly, and way too tired, and just to make my trip more exciting my luggage decided to visit somewhere else.  After chatting with the baggage person and filling out my hotel info I headed outside to figure out if there was any way to actually get where I needed to go. 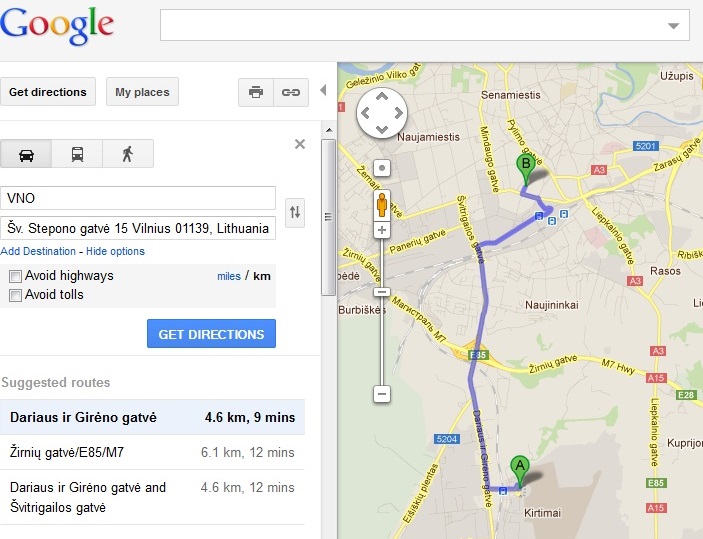 Google Maps shows it as less than 5km!

Public transportation was shutdown, I didn’t know where I was in relation to the city, and there was only 1 taxi cab waiting…this was not going to be good.  Basic rule of travel is that if you cannot speak the language and you have no other option, the price jacks up way past sensible.  This was no exception.  The taxi driver told me it would cost 90 Litas (about 38 USD) to get to my destination (and he was even going to use the meter!).  I never saw a meter spin so fast, but at the low low rate of only 18 litas a kilometer I finally made it to my hostel, or what I hope was my hostel’s location.

So here I am, somewhere in the city of Vilnius, sans luggage on some dark quiet street standing outside of what I can only hope is my hostel….but I can’t seem to find an entrance.  There is only a small sign on the window that identifies it as “A Hostel” (clever name I know).  The only other folks nearby I find are a couple of homeless Lithuanians who I can only assume are heckling me in Lithuanian as I wander around like a lost fool.  I think they are asking me for money or perhaps they are just being friendly in their cheerful drunk state, but regardless I decide to walk around the unlit building and down a few streets.  I see a few other kids hanging out strangely next to a set of dumpsters, but nothing that looks like my hostel and certainly nothing to appears to be open anywhere.

I attempt to send my friend messages and get no replies and try a few phone calls.  Finally though after a bit of luck and trying, I was able to reach him.  We discover that I’m not at the location of the hostel, but one of its sister properties that are only open during the summer (if July is not summer in the Baltics, I quickly question what is.  I can’t imagine there is much of a warm season in this part of the world).  So my friend attempts to navigate me through this city I’ve never visited before in hopes that I would find the right place.

After a bit of trial and error, I soon close in on the hostel’s location and see my friend running out of the hostel barefoot to meet me on the street.  I wandered back with him to our brightly lit and oddly placed little hostel.  The hostel itself was nice, large, strangely laid out (possibly a very large old building or buildings) and it seemed to double as a bottle shop at night.  While trying to get some questions answered about keys, we saw a steady pace of folks wander in to buy alcohol and potato chips.  We get into our room, a small and thankfully clean private room situated above reception.  With the exception of the wifi requiring me to prostrate myself next to the door for a signal, it was a comfortable enough spot to lay my head.  But at this point I am simply looking forward just to settling in for the night, getting my luggage back soon, and exploring this new part of the world.

One of the most unique sights in Georgia, David Gareja is a rock hewn … END_OF_DOCUMENT_TOKEN_TO_BE_REPLACED

One of the most beautiful but least visited parts of Iceland, the … END_OF_DOCUMENT_TOKEN_TO_BE_REPLACED