Axum (or Aksum) is one of the most historical places in Ethopia. Axum was a great kingdom and it left behind sound absolutely incredible relics and history. Several of the sites here also pre-date the Axumite kingdom but are certainly important to the history of both the Kingdom and Ethiopia as a whole.

The city itself is really not that big and many of main Axum historical places could easily be seen within a day or even part of a day. But if you do find yourself in town for any length of time, it is certainly recommended to go and visit some of these incredible sights.

Read ahead to find the best things to do in Axum Ethiopia. One of the most well-known places in Axum is the large Stelae park. Stelae are those large stone slabs you see here, those obelisks that have carved inscriptions within them. Several of these stelae have been repatriated to Ethiopia actually including the large one returned by Italy. The lighter colored stelae in the middle of the photo above is the one that was returned by the Italians in several pieces.  The Italians also built the structure to keep the other stelae standing up even though it’s a bit of an eyesore actually. There are several tombs to wander about as well as another stelae that had previously fallen over. Definitely worth the visit. 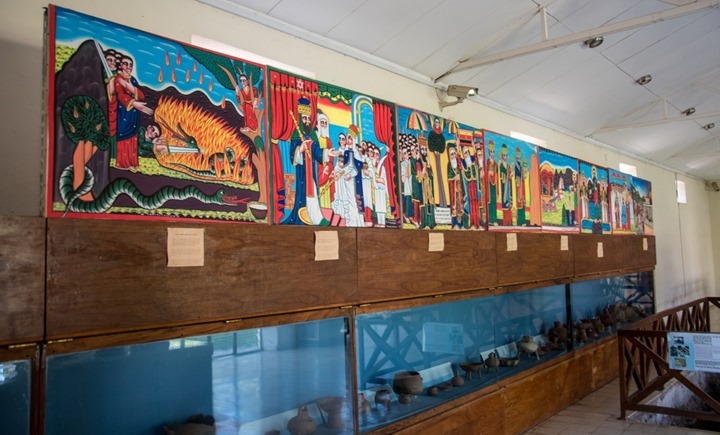 Part of the grounds around the Stelae park is the Archaeology museum. It has quite a few artifacts from the area and several paintings as well.  Overall it’s interesting for a quick view as not all of the things are easy to follow (additionally not everything is translated into English if you have trouble with the local languages). I’m not sure I would consider this a completely separate site from the above Stelae park but you could easily miss going if you didn’t know it was there. 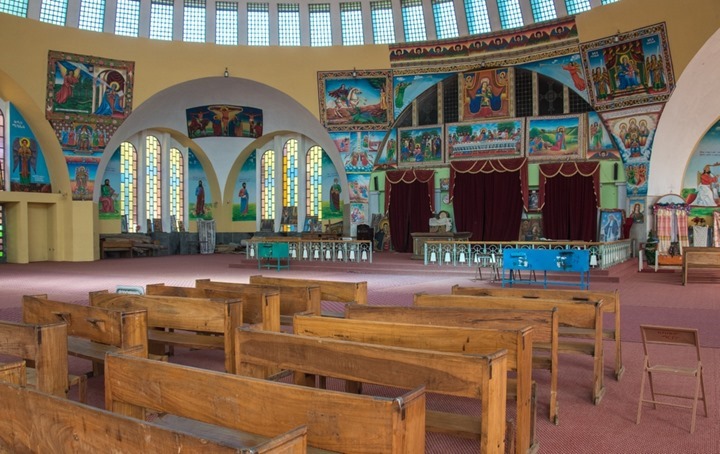 Quite a large and lovely church actually and rather new in construction. Our tour guide mentioned this was constructed so that there was a place for women to also pray (as the nearby monastery is off limits to women). The Church had quite a few beautiful paintings and also some older manuscripts and beautiful books and artwork.  There is also a Church Museum nearby with several church treasures as well as outfits and other local goods. You cannot take photos inside the museum and they actually require you to lock-up any cameras and cellphones. I’m not sure why, though. 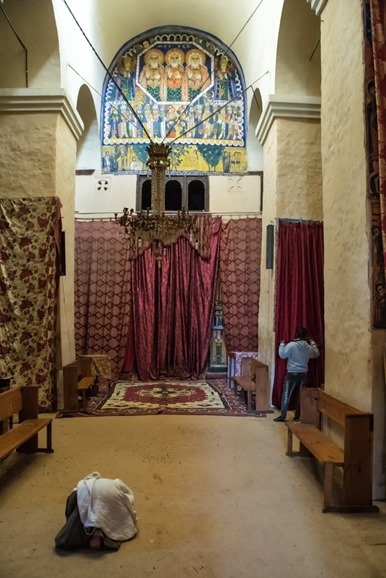 These areas appear to be off-limit to women which is unfortunate but overall interesting for a visit if you are able to go. The monastery has beautiful artwork on the walls and I did find it interesting how the Madonna was black on one side and at a later depiction was white. This seemed to be the influence of Europeans on the religion and the region. Overall the paintings and the preservation of the church is gorgeous and really enjoyable for a visit.

Ark of the Covenant Chapel 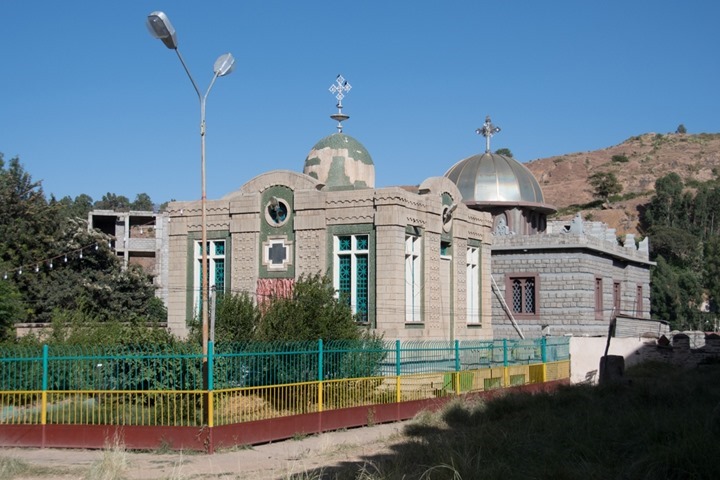 The chapel is probably the highlight of the area but it is off-limits. The chapel is the supposed house of the Ark of the Covenant that was said to have been brought to Ethiopia by Solomon’s son. There is one priest who is in the Ark who guards it and can never leave. As a foreigner, you have to stay quite a bit away from even the gates of the building as we were told that a tourist in the past tried to jump the fence. 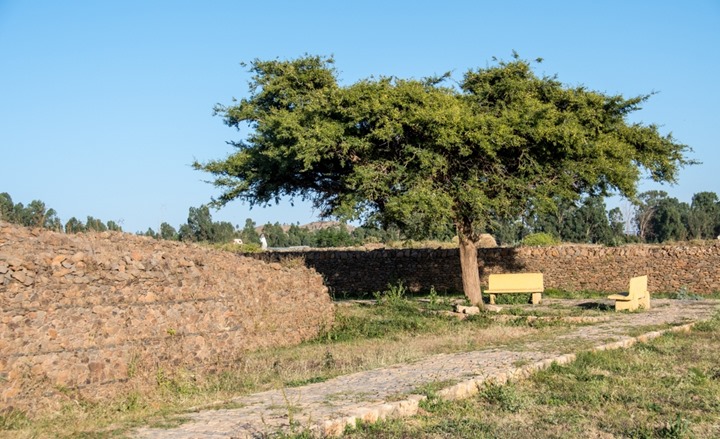 The Queen of Sheba is central to much of the mythology surrounding the history of Ethiopia so it is no surprise that there are places linked to the Queen here in Ethiopia. Sheba is a mainstay of the mythology from several countries (such as nearby Yemen across the red sea) and so much of her history if she did in fact exist is left shrouded in mystery. However, according to Ethiopian mythology, she originated from the land around Axum. Is this really her palace? I suppose no one is certain, to be honest and our tour guide wasn’t very convincing about the reasons for its attribution to Sheba. But regardless it’s a fascinating history and a really interesting place to wander around. Makes you surely hope this is the home of the legendary Queen and her legendary beauty. 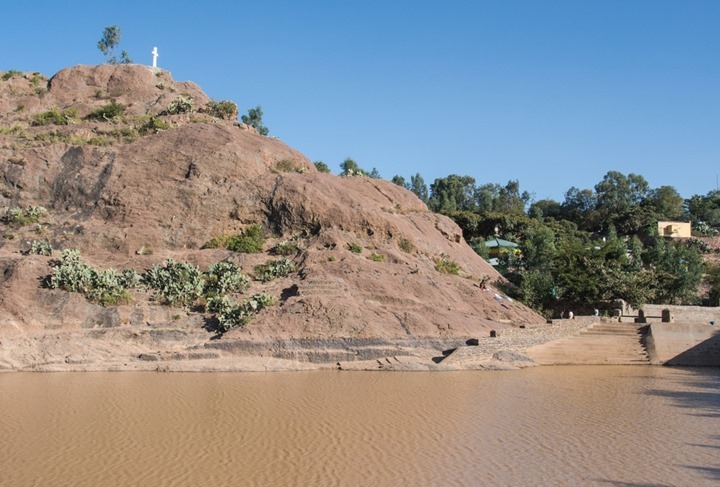 This is a large pool of water that the locals believe is holy. Supposedly according to local legend this was used by the Queen as an area for bathing. The water is a bit muddy brown however for many of the locals it is the only water they have available so you see regular groups of people heading there to fill up large plastic containers. Overall though there is not much you can really do here but you can stop for a quick photo as it is easily accessible on the side of the road.

An interesting set of tombs on a hill. Actually, it was interesting to walk into the tomb area and learn about the history of Axum and the area. Unfortunately, the English of our guide was not as great as I would have liked. It’s worth a really quick stop unless you are really interested in some of the history and seeing the tombs of the ancient kings. However, I can’t seem to find my photograph of this place so I’ll post it later once I locate it.

In general, in Aksum, there are several hotels for quite a few different price points. We ended up staying at the Sabean Hotel in Aksum which overall was good but a bit overpriced I think. However, we were a bit tired of lower quality hotels in other places so the cleanliness and comfort was worth it for the night we spent in the city.

If that doesn’t work there are other hotels in the city as well. But overall don’t expect western standards.

I’m a bit of a huge Aerospace geek. Really love the topic. It started long … END_OF_DOCUMENT_TOKEN_TO_BE_REPLACED