The flight is leaving in a few hours.

Is it enough time to make it?

Yeah, but we have to hurry.

I have been in Istanbul for a few days now, visiting friends, stuffing my face full of delicious food, and trying not to melt in the searing summer weather, but I haven’t really ventured far outside the city yet.  One of my friends here cautioned me against doing that…again…  I love Istanbul but there is so much more to Turkey so between us we were trying to see where we’ve been and where to go.

As we were sitting there in a café, looking up ideas, my friend’s phone rang, new job calling.  Start date on Monday.  Well damn, that puts a bit of a knot in our problems.  Maybe a weekend trip?  Wouldn’t Mount Nemrut be really cool to see? There was a flight staring at us during our searches, out to Gaziantep.  Neither of us had been to the eastern side, and it was calling. But the flight left in a few hours.  So we figured what the hell.  -S- would make it a weekend trip and I would just go one way and make my way back eventually by land.  What is the fun if you can’t make rash decisions and just go?

Done. Time to Pack.  Sounds easy enough. –S- and I looked at each other and figured we didn’t have a moment to waste.  Thankfully –S- actually knew how to get to the other airport, Sabiha Gokcen Aiport outside of the city. It is where most of the low cost airlines run such as Pegasus which we used. I’m pretty sure if my friend wasn’t here I would have been out of luck with the amount of time remaining.

Gaziantap is not necessarily the closest or best location to fly into for seeing Mount Nemrut, as there is an airport near the mountain as well as a closer airport in Urfa.  However after discussions with travel agencies, booking searches, it was the best and only affordable of options.  With no guide, no real concept of what we were doing, and no real Turkish language to speak of (my friend spoke a little), we figured we’d have no problems at all.  And surprisingly things went rather smooth.  I had a map of Gaziantep I had downloaded (always a recommended thing to do with your smart phones before any change in city), we were at least able to tell sort of where we were on the bus in relation to the hotel. 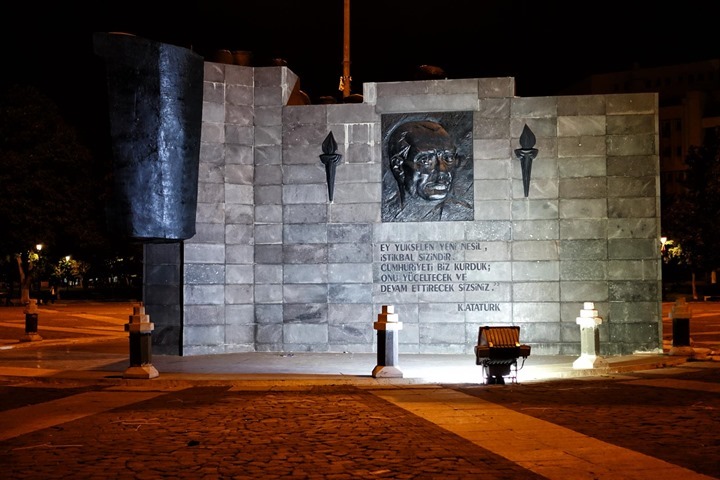 The city itself is an interesting sort of place.  I never really knew much about Gaziantep before visiting and even after I can’t really say I know much about it either.  For a city that is considered one of the oldest continuously inhabited cities in the world, it seems rather…modern.  Due in large fact to a government modernization effort of the eastern parts of Turkey.  Even the name Gaziantep is not that old considering that most people still refer locally to the place as Antep.  It didn’t seem like a historically signification or interesting place until I spied the Kale (Castle) in the distance lit up against the dark night sky.  The castle, believed to date back at around 9000 years is amazing and so ancient.  What it took me a while to realize out here which I’ll write about more later is how old much of this part of the world is. Like biblical references old.

Another thing I learned quickly is that Gaziantep is famous for it’s Baklava, so much so that Gaziantep Baklava achieved one of the first European protections for products from Turkey.  It is said that all Baklava chefs from around Turkey first train here in Gaziantep.  In the interest of completeness I will need to make sure to do full exploration of this claim.  Many friends have also asked me to bring back Baklava for them, but lets be fair, we all know that isn’t going to happen!

There is a lot to explore in this area.  Upon checking into the hotel, it became quite apparent how difficult it was going to be to travel in the east without any Turkish.  In the west with the higher percentage of travelers it is at least easier to find English speakers, but the further east you go the less English you will find.  We spent about 30 minutes at the hotel trying to check in and get all that settled.  We tried asking questions about buses but even as the receptionist called in others no one really could give us any solid information.  We did finally get someone who gave us a post-it note with some info on it that we could use to catch the bus to the station.  My friend’s limited Turkish was going to be pushed to the limit here in the east, and I know we are going to be lost constantly…but I suppose that is the purpose of adventure right?  My hope is that my Arabic studies will prove somewhat useful here in the east due to it’s proximity to the middle east and it’s large refugee population.  But either way all those stories are left for the next installment.

"If they ask us to prepay....I'm out", I said to Patrick with a … END_OF_DOCUMENT_TOKEN_TO_BE_REPLACED

One of the most tragic events that occurred across the great plains. … END_OF_DOCUMENT_TOKEN_TO_BE_REPLACED