It is one of the most beautiful cities…no places I have visited. It is stunning. If you’ve been you know. If you haven’t well, even though the photos are stunning it doesn’t do the place justice.

So when we asked people what is one thing we need to do while in town, nearly everyone said to hike Lion’s head.

Standing at over 669 meters (2195 ft), Lion’s head is easily viewable from many areas of the city. Nearby Signal Hill forms what is possibly the “butt” of the Lion (it was previously known as Lion’s tail).

I got this from a lot of people. Lion’s head is most famous because hikers can view the sun-setting from one side of the mountain and the sun rising from the other. Given the orientation and topology of the mountain this makes it easy for people to get incredible views of the city and surrounding area at both times of day.

For that reason, it is very popular to hike Lion’s head at various times. You can try to get up there (even part way) for sunset. Or you can hike up overnight and try to get there in time for first light. Many people try to catch both sunset and sunrise at the mountain. 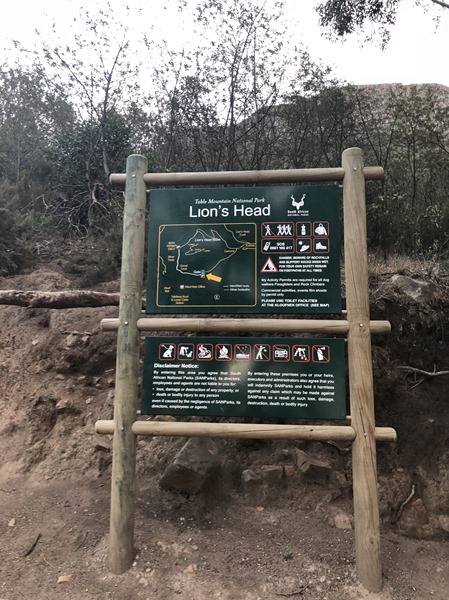 We ended up hiking at least part of the mountain twice.

I don’t know, maybe we just had a lot of time on our hands. But really we were nearby anyway and started hiking up. The trail in the beginning is not so steep, mostly a dirt well marked track. We got up about part of the mountain when we realized the sun was setting. And we were not prepared. You really need a headlamp if you are planning to hike the trail at night (to get up in time for sunrise). Actually at this point of time quite a few people were hiking up to catch both sunset and sunrise. My lamp was back at our AirBNB.

However, going up at sunset did give us the opportunity get some incredible views.

After the sun finally set.

Getting back down is a bit tough at night, and thankfully the trail was clear and rather well maintained. Further up however we would not have done well without light.

This time we were prepare. We woke early. well before sunrise actually so that we could get there (“hopefully”) in time for sunrise. I also packed my trusty headlamp (I knew there was a reason I packed it.

** Pro Tip ** I always pack a headlamp for big trips. Its come in hand more often that I ever would have expected. **

Hiking up during the cold and dark morning was definitely not the easiest going (mostly trying to get myself to be motivated to be there). It was really rather foggy. It seems like we would easily be above the clouds here.

Photos on the way up were rather limited. Mostly because light was limited.

The hike up is pretty straight forward in terms of the paths you can take. However there is a point where the trail does split to a easier and more difficult path. On the way up we took the easier path (it was also harder to see then).

Overall the hike has a few tricky areas. There are a few where you have to traverse some ledges (although there are chains to help you) and a few places that need ladders to go a bit more vertical. 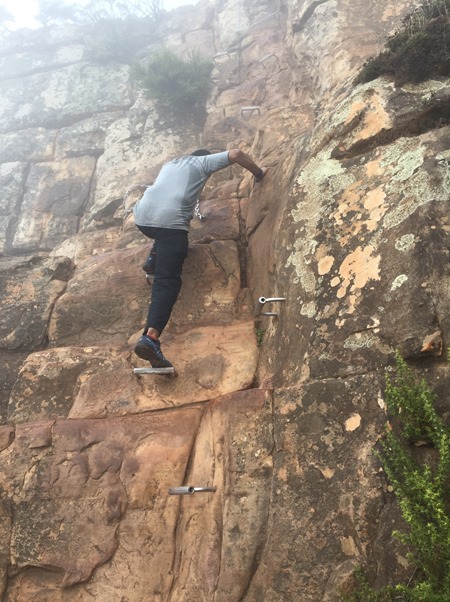 The more difficult path really isn’t that much more difficult than the “recommended” path. You need to be a bit more careful with the ascent. Although it is shorter…with the lines of people going up and down I’m not sure if its any less time.

After a bit more hiking you eventually come to a big clearing. We ended up hanging out here to finish watching the sunrise.

I’m not sure what to think about the following photo.

We ended up losing some of our group here in big landing here. However for those who are want to get to the summit, there is actually still a bit more hiking to accomplish.

For us, the view from the summit was nothing spectacular due to cloud cover. We were basically in the clouds during our stay up there. (I know that the above photo is deceptive in that regard).

My friend hanging out to the sign signifying the summit at 669 meters. He wouldn’t let me get a photo of it by itself so now he gets to be immortalized here.

The trailhead is located about 1KM down Signal Hill Road. The trailhead is pretty well marked and there is (as of when we went) a coffee place at the base of the trail. If you reached signal hill at the end of the road, you’ve gone too far.

If you don’t have your own car, you can alternatively take an Uber to the trailhead. Uber is pretty cheap in Cape town we found. Actually parking at the base of Lion’s head can be very difficult (especially in the high season) so Uber might be your best bet.

The War of the Pig: The Pig Incident June 15, 1859. American Farmer … END_OF_DOCUMENT_TOKEN_TO_BE_REPLACED