The end of my crazy little day in Zagreb and Plitvice National Park.  Just for those following along who may want to know how it ended.  Check out Part 1 and Part 2 if you haven’t yet.

She began to explain the situation to me before realizing I didn’t understand her.  I usually end up with my “go to response” of just appearing like a dear in headlights with a confused dumb look on my face  I really ought to be better at this by now).  But thankfully they were able to find someone in the waiting room who did speak English and they were chatting a lot back and forth before he said.

“Well the good news is, that it is not broken”…

Me: “Great, that is wonderful.  I didn’t think it was broken, but it’s great to be sure”

Him: “How long are you in Croatia?”

They talk back and forth a lot before he finally replies.

Him: “Hmm well that is not good”

Me: “Well I really have no choice; I need to get to Budapest so I can fly home”

Him: “Well it is best you stay here longer, maybe a week or so rest up, stay off your leg”

Me: “Yeah unfortunately I can’t do that, already have a flight, I really need to just go home”

Him: “Well they said they cannot do anything more than for you.”

Me: “No worries, I figured as much.  I’m just glad it’s not broken”

They wheel me into the exam room.  The nurse proceeds to wrap my ankle and the doctor tells me again there is nothing else to be done.  I thank them again for their help.  I ask about some pain medication and he directs me to go to a square nearby (the receptionist at the front can direct me), where there should be a pharmacy open all night.  I thank them again, thank the nice gentleman who became my impromptu interpreter and began to limp out of the exam room.  Already with my ankle wrapped I was feeling a ton better, I was at least able to put pressure again on my ankle.

I head back over to the reception to get directions and to check out.

“Umm well I don’t actually have 440 Kuna on me at the moment.  Can I pay you with a credit card or perhaps Euros?”  – I ask a bit hopeful and nervous.

“Umm…I do not know…ummm…can you wait, let me check” – she says as she darts off out the door of her office.

Hmm…here’s hoping they’ll let me.  At the moment I don’t know what I can do.  Not sure if they’ll let me limp off to an ATM or something to get cash perhaps.

She returns about five minutes later and says, “Well actually your bill is only 230 Kuna”

Are we negotiating?  Did I just haggle?  I’m not sure how this happened, but that is definitely much better.

I had about 206 Kuna on me at the moment (counting all change)…and yes I realize how much I suck for going to a medical center without at least a reasonable amount of cash.  It wasn’t my first thought when I went, but definitely a lesson learned if something like this were to happen again.

“You don’t understand.  You already paid 300 Kuna, so you are getting money back” – She replied

“Wait, what??  I’m getting money back?” – I said completely confused.

Seriously I think my mind nearly exploded from hearing this (although that probably would have upped the price of the exam again).   Something did not quite seem right to me.  I don’t think I’ve ever had money returned to me from a medical examination cost.  Clearly they have not Americanized their health care system yet…

So I took my change.  She gave me directions for the pharmacy located in Trg bana Josipa Jelačića which apparently is a big square nearby and that I wouldn’t be able to get a taxi.  But at this point I felt quite a bit better so I didn’t mind limping a bit and I didn’t have anywhere urgent to be.

I limped over in the direction of the square and arrived probably 30 minutes or so later (it wasn’t far geographically, but everything is far when you are hobbling along). 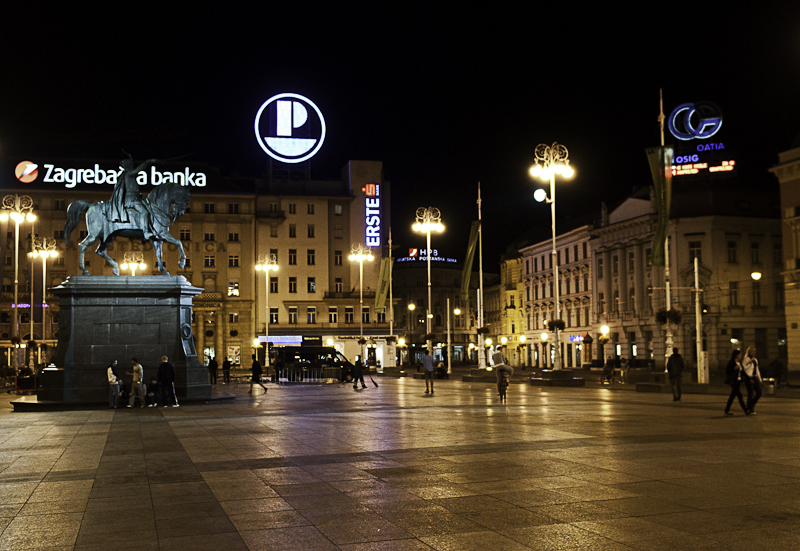 Trg bana Josipa Jelačića -- (Not taken on the same night)

The square however was huge, bigger than I expected it to be.  It was late but it was a Saturday night so there were quite a few people wandering about this evening.  I saw several pharmacy signs and figured I would go check them out and see.

Closed. Closed. Closed. Hmm this was not looking good whatsoever.  There seemed to be one last pharmacy located at the far end of the square, so this was my only hope.  But as I limp closer my hope starts to fade.  It seems closed and when I get to the door, yup definitely confirmed closed.

What the heck? I was told there was an open pharmacy, this really sucks.  I feel frustrated and angry that I wasted all the time and energy trying to make my way here only to be let down.  I peek around to corner to see if there is anything else nearby.  Well as I look there seems to be a large line out the door for the store next to it.  I can’t really understand the sign above the door, it’s not a pharmacy, but either way it seems odd that so many folks are there at this hour of night.  Inside the building are a lot of folks hanging out, and a closed door at the far ahead and a panel on the right wall.  I ask the man in front of me if this is for the pharmacy and he confirms it so and points to box on the wall inside.  I figure this is a good time to hop over to an ATM and get some cash, since at this point I know I’m going to be in Croatia longer than planned anyway.

I get back about 10minutes later and the line is completely gone.  Seriously no one around. Thank goodness I had gotten there earlier or I would have had no idea to go inside the door adjacent to the pharmacy.  I enter the lobby, the inner door is locked and I move over to the wall with a call box and a metal panel below it.  I push the button and hear a ring and then a voice on the other end.

“Umm is this the Pharmacy”, I ask completely unsure.

“Umm ok… Umm do you have Tylenol?”

“Tylenol, or Panadol, …or something?”

Hmm ok I know that Tylenol and Panadol are brand names.  And that I should have used Acetaminophen or Paracetamol instead, but please understand my ability to recall information was not quite working right at midnight.

“Ok Umm…how about ibuprofen?” – I asked once again.

“OK.  How about maybe a bandage to wrap a ankle. And some tape.”

She said A couple things I couldn’t understand and then there was a tray open below the speaker.  I don’t recall if it was always open but it was open now.  I toss some money in there that I hope is enough (They probably told me a price but I have no clue what it was).  The tray spins, I hear some shuffling around, and then it spins again and there is my stuff and the change.

“Thank You” – I say loudly back into the microphone as I grab my stuff and go.

Success!  I feel much better and more accomplished now.  I’m also really starving too as I haven’t eaten in like 12 hrs or so at this time.  I find the closest place a McDonalds and head in for a snack.  As I’m sitting there eating my actually not terrible thai shrimp wrap.  I see wave after wave of girls dolled up in dresses and high heels and smartly dressed guys wandering about.  Clearly this is probably the only time I’ve felt under dressed going to McDonalds… But after all that happened today, I really can’t bring myself to care.

We’ve been trying for weeks now, maybe even months depending on when you … END_OF_DOCUMENT_TOKEN_TO_BE_REPLACED