The lovely and ancient Roman Theater in Amman Jordan

It is interesting to be finally back in the middle east and one of my now favorite places Amman Jordan.  Cities of the world are known for so many things, and I try to think about the distinctive thing that I think about when I imagine Amman and perhaps it is the city of hills.  If you have ever been to Amman the hills are such an inseparable trait of the city.  Everywhere you go it seems there are hills to go up and down.  One of my past taxi drivers once joked that everyone in the city had a great view from their house due to the hills, and another once remarked that Amman is a city for lovers due to the views from all its hills.  Perhaps such statements aren’t true but as I look out from my apartment window I can see a beautiful view of the citadel in the evening and I have to see the view is quite nice. 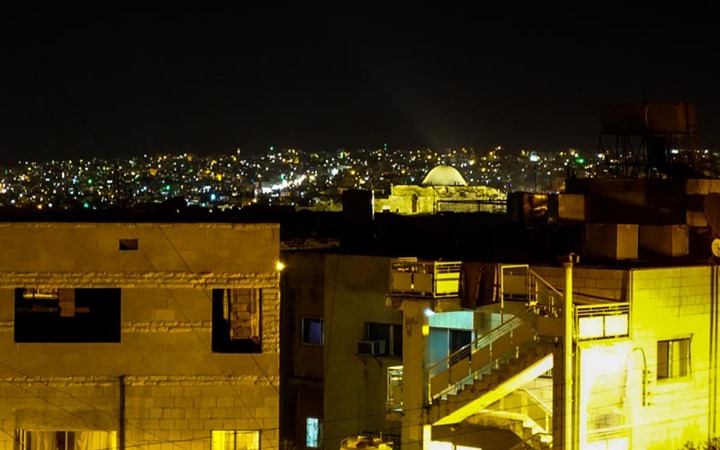 The first thing I realized from all the hills is how out of shape I have become.  Living the last year full time back in the US, I have definitely negatively added to my weight and my health as I huffed up and down hills surrounding my hotels searching for an apartment to live in.  The heat and sacrifice of Ramadan only added to the difficulty of those treks each morning.  I had desperately tried to find a apartment prior to arriving in Amman but through emails and web searches I seemed to only find disappointment.  I knew the best way to find a place was when you are on the ground, walking the streets of the neighborhoods you want to live in and taking down numbers from signs you find along the way.  It is a bit of an Art trying to determine the age of the sign and whether it is still worth attempting to call something that was potentially months old.

I had strategically chose my apartment in the center of the city (وسط البلد or literally center of the country) so that it would be conveniently between the two neighborhoods I wanted to live in Jabel Amman and Jabel Al-Webdeih.  Tucked away in a spot that I must have passed thousands of times before and never seen, Boutique hotel was clean, centrally located, and with a lovely staff.  It was about as convenient as one could get although it was still exhaustingly located at the base of these two large hills that those neighborhoods sat upon. 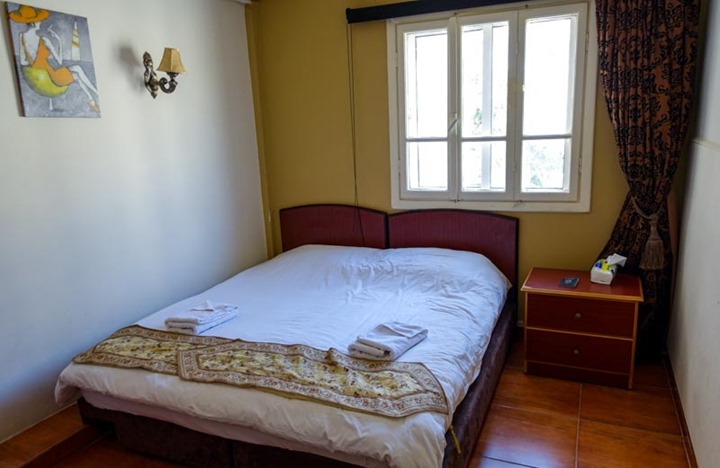 On a side note I did wake up oddly one morning to discover the entire hotel under reconstruction except for my particular room.  I guess I was the only guest left.

As the mercury kept rising and I kept plodding along the visiting apartments and calling numbers with my woefully inadequate Arabic I started to get frustrated.  Apartment after Apartment was honestly pretty terrible.  Many over priced and many in conditions that I would struggle living in even for just several months (especially considering the costs).  And everything was well over the prices I would have been willing to pay a year ago, I’m curious if prices have really changed that drastically over the last year.

I finally after long hours of searching found a place, a bit above my budget but still affordable, in probably the best location I could imagine.  Directly in the neighborhood I wanted to be and even in the part of the neighborhood I chose to live in.  I do have a bit more space than I need but hopefully it will encourage friends and family to visiting me while I’m in this part of the world. 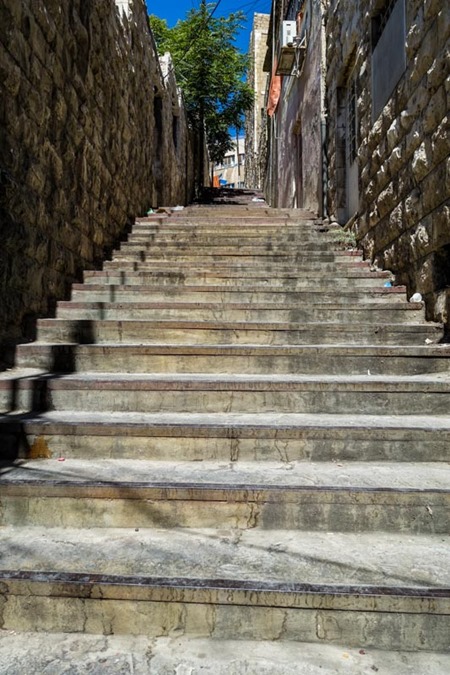 Stairs everywhere, everywhere.  They seem to never end… This isn’t even one of the larger ones around.

So how is it being back?  Well it’s a bit weird.  My last trip to Jordan was one of the best experiences in my life.  It was a combination of time, place, and people that really made it what it was.  I was lucky to be around such an incredible group of locals and foreigners that really it was something that will stay with me forever.  This trip hasn’t been quite as special although not to say it’s not good.  Most of my friends have left, and several of my plans have sort of fallen through including some work possibilities.  I might be able to do some work in the region but it would require me to travel which will disrupt some of the living and studying in the region.  Maybe this trip will focus more on regional travel then the last one did.  I’m not sure.  It is also shorter so I feel that planning long out is much more difficult. I do have a trip to Turkey over the Eid Al-Fitr holiday coming up next week, which I’m excited for.  One of my good friends from my previous trip to Jordan now studies there.

Beyond that seeing Jordan during Ramadan was not all I expected it to be either.  I expected more festivity for Ramadan something that lacks if one celebrates the holiday in a non-Muslim country.  While people are out and about all hours of the night and some places do open later they don’t have markets and other special events going on that I hoped to see.  Perhaps I had expected too much from Ramadan.  I think part of the reason may be due to the situation going on so close by in Gaza that occupies all the news and thoughts of all those around me.  Staying in a country where the majority of the people are Palestinian it is easy to find someone who has a direct connection to people and things in Gaza and that likely contributes to the more somber atmosphere of the folks in the city.

But as Eid approaches and plans continue moving forward (Arabic classes are good, although I realize how much I don’t know and also how much I have forgotten) I will try to continue to update and write about the events and adventures of the next couple months.  Still working on visas and plans for a few ideas, so be sure to stay tuned as I hope to share them with you.

An old city injury requires an old city solution. Or at least that sounds … END_OF_DOCUMENT_TOKEN_TO_BE_REPLACED

One of the most famous writers in America, Ernest Hemingway is famous for … END_OF_DOCUMENT_TOKEN_TO_BE_REPLACED