“Is the gate open today?”

“The gate at the border”

The Syrian guy looked at me like I was an idiot as the mini-bus wheezed out of the station. My Arabic almost coming out as second nature given that it was the only language I could successfully speak in this area of Turkey.  I realized quickly around me that everyone on the bus was speaking Arabic, most carrying small bags and talking to family and friends on their mobile phones. I told him I didn’t know about the gate as panic started to set on me.

Exactly where the hell was I going?

I thought back to yesterday as I sat in the café with my British friend going over day trip plans.  My original thought to go to Mardin was called off after I realized the distance and the difficulty given that I would be traveling in the other direction. So I settled on Kilis given the glowing recommendation from the guide book and the close proximity to Gaziantep.  Lots of lovely old Ottoman buildings and friendly people the book cheered.  However I probably should have checked the date of publication in hindsight as it would not have made sense simply for a “tourist stop”. Ignorance is bliss sometimes right? 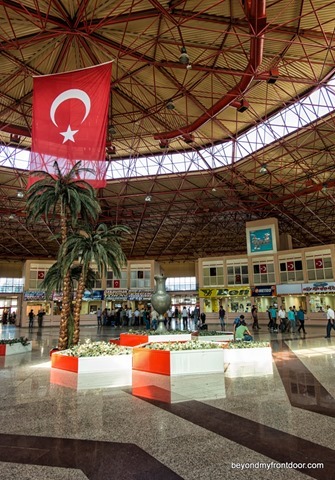 I watched the whir of the world spin by outside the window, listened to the trusty bus click lightly down the road.  The folks around me still chatting away incessantly on their phones while I stared incessantly at my GPS watching the dot move closer and closer to Syria. I really wasn’t sure where this bus would eventually end up to be honest. I figured there was a town there of the tourist variety, perhaps with some things to actually see as well.

The bus pulled into a dusty but full station and before I could even get out of my seat, folks were already clawing for a spot.  Apparently getting out of town is far more difficult than getting into it.  There were many buses lined up along the curb here, mostly heading in the direction of Gaziantep.  However there were far more patrons clamoring for seats than there were ones available.  I got off the bus, backpack in hand and with little sense of where to see or where to go.  Many folks were calling out to me in Arabic and Turkish offering taxis to places, some to the border, and some to areas around town that they assumed I would likely be going.  I ignored them all and continued on into the city. 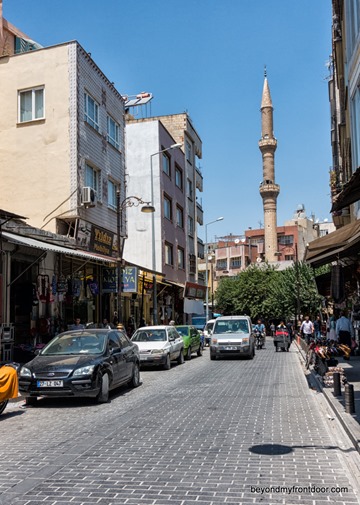 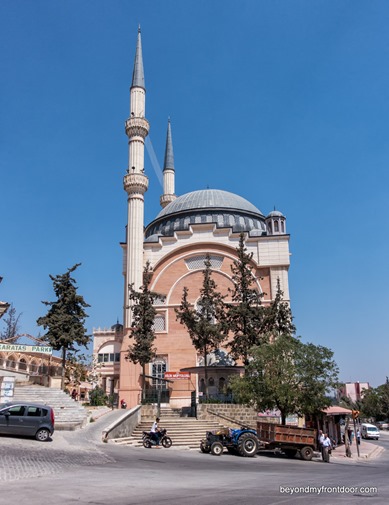 My little GPS had a small, poor map of the area.  I sorta got a sense of where the “downtown” was and started in that direction. Lots of shops and merchants hawking their wares.  I ended up wandering into a cell phone store with the hope of putting credit on my phone.  One of the benefits of being here at the border was that I would find folks who spoke Arabic (I had been studying Arabic in Jordan).   The first store the folks only spoke Turkish but they found a nearby kid who was able to speak both (it’s always the kids that seem to be multi-lingual).  No luck with the credit and no luck with internet access.  The second store was only slightly better.

“Only Turkey or do you need it to work in Syria as well?”

He asked as I looked perplexed.  Umm…just Turkey Thanks.

I was finally able to recharge my SIM card although oddly still not able to add mobile internet data.  It seemed I’d be without for this entire trip.  Drats. 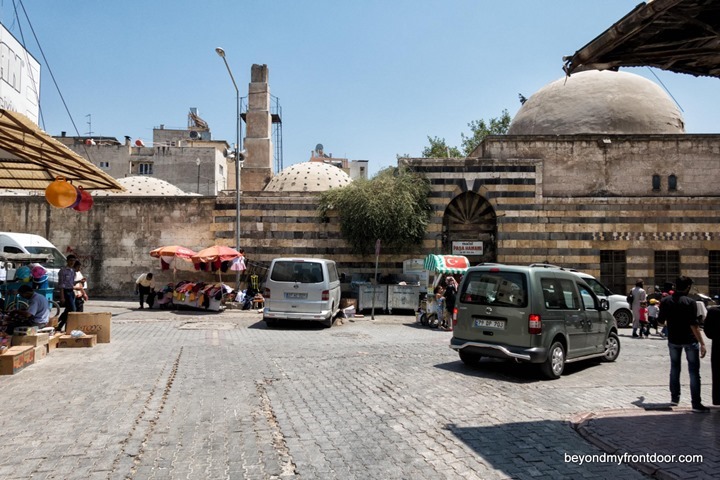 Kilis is a lovely town on the Border with Syria and one of the most popular crossings for those trying to sneak into Syria.  It also is home to one of the largest Syrian refugee camps in Turkey as well.  Granted I knew none of this before going.  I really was just thinking it was somewhere with scenic Ottoman architecture.  I quickly knew something wasn’t right though given all the other circumstances.  However being ignorant and cheap I figured I would make the most of my time here and not waste time trying to go somewhere else.  There was bound to be something to see perhaps being one of the only if not the few tourists wandering about.  It also made me a bit more leery, mostly trying to sneak photos from a small point and shoot camera when I can.  Folks looked at me oddly, trying to figure out my purpose.  Lots of folks asked me what I was doing in town. 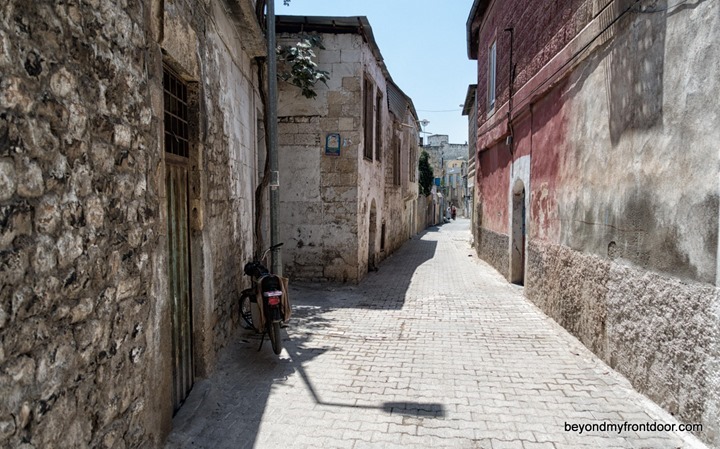 I wandered around the various streets of the city.  Many of the very old or at least appearing that way.  Watching children and motorbikes dart around corners through the windy alleyways.  It was both old and modern at the same time. 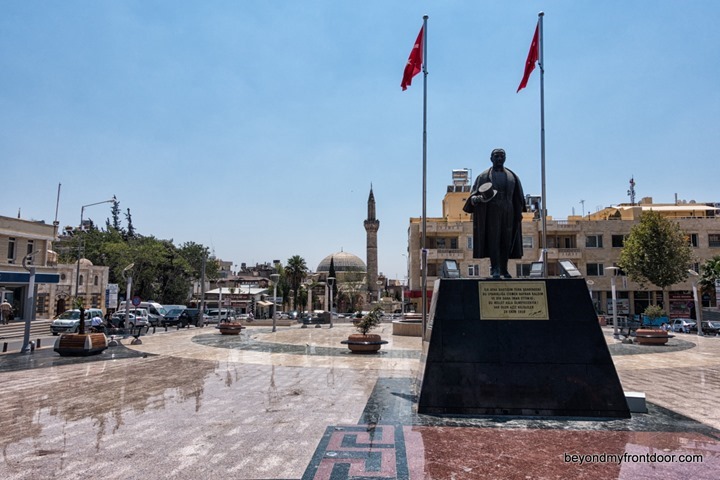 I found myself in a square looking for food and for other things to see.  Folks were doing construction in various parts, trying to upkeep the various sites and buildings of the town.  Even with the numerous tourist buildings there were no tourists to be seen and nothing but bewildered stares at me when I would ask what things were of if they were open.  A car pulled up next to me as I was taking photo of this Ataturk statue (it was becoming a bit of a game for me to find the statue in each city).  He asked me something in Turkish to which I didn’t understand and then switched to Arabic and then also to some broken English.

“What are you doing here?” he inquired looking at me as I took some photos and looked about.

What are you really doing here?

Apparently tourist isn’t a good enough answer, and I didn’t realize until after the fact how strange it seemed to be an “actual” tourist in this town during these times.  They likely thought I was either a journalist or perhaps for some other work or nefarious reason.  I’m sure if someone was following me they would have been bored and bewildered by my actions in this town. Perhaps I seemed a bit strange wandering around and taking photos as if I was located in some different town or a different time period.

The only person who seemed to be excited about my presence was one of the few restaurants opened at the time.  A little kabob shop off the main square.  The young guy and girl were the only two working this time of day and the guy was far more excited to see and talk to me.  He seemed to revel in the ability to practice some English with a foreigner and was happy to talk about the city and the area.  He mentioned how he was glad to have me as a guest here in the city.  The food was rather delicious too. 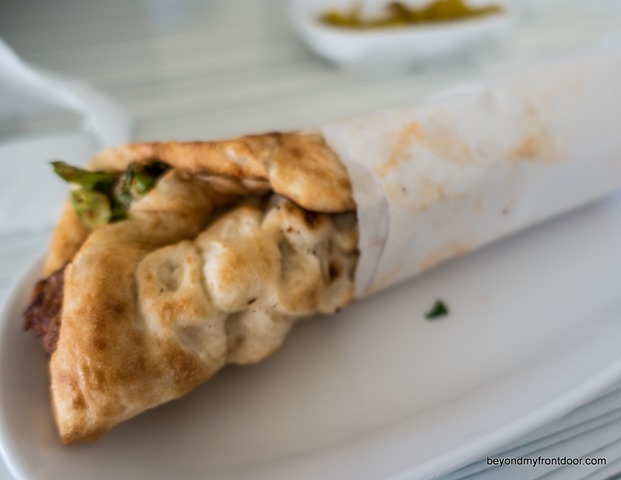 Beyond these encounters I kept wandering the city.  None of the various tourist sights seemed to be accepting guests and many of the as I said were being repaired.  People were generally receptive but confused by my presence and no one seemed to interested in allowing me access to any of the various Ottoman wonders.  Beyond that there was not much to see.  I worked my way back slowly to the bus station trying to get back out of town and to Gaziantep to try to wander and see the town more before my time in the east was up.

Returning to the bus station was another matter.  While getting into the city was easy, getting out was going to be a lot trickier.  As buses pulled up folks were scrambling to them before they could even park in their spots.  People were clawing to get any available bus and there seemed to be no shortage of people and never enough buses.  After missing several buses I realized something had to change or I was going to be stuck in this town.  Fortune (and sometimes survival) favors the bold or so they say, and I needed to be more bold now.  As the next bus came into the station I followed its movements and started to make my way towards it.  I noticed lots of other people quickly moving as well.  As the doors opened and the people poured out I positioned myself to get situated in the seats.  As the opportune moment I dived into the bus and moved myself to the back corner clutching my bag and holding onto my seat.  Other folks quickly pushed in as well, arguing, maneuvering, trying to get their bags all into the bus as it quickly filled beyond capacity.  Me still against the back corner, pushed even further against the side and the window as the last few people and products were stuffed into the carriage.  And before I realized it we were off, the bus lurching once again out of the station heading towards Gaziantep and to destinations afield. 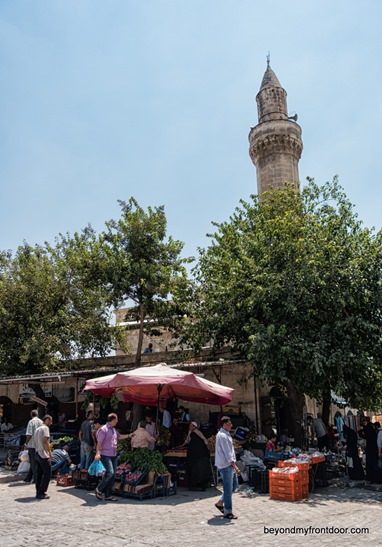 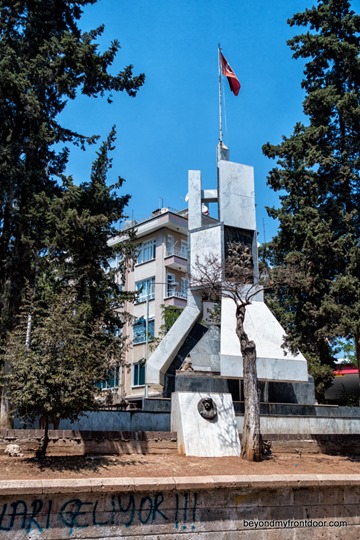 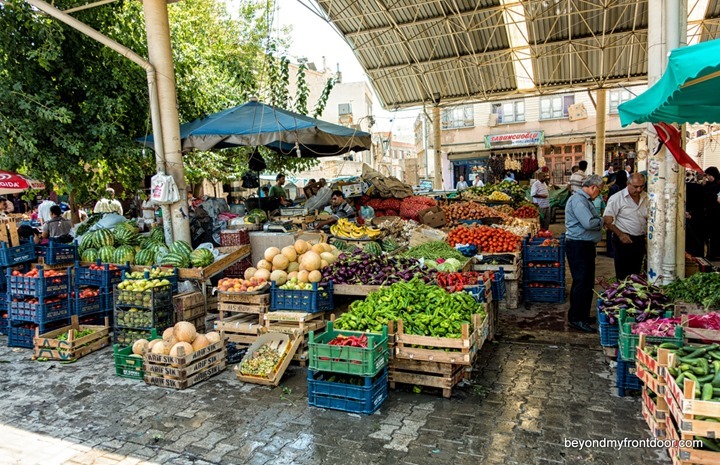 This post is a continuation from part one on Auschwitz I. If you are … END_OF_DOCUMENT_TOKEN_TO_BE_REPLACED

Cape Alava, the westernmost point of Olympic National Park as well as the … END_OF_DOCUMENT_TOKEN_TO_BE_REPLACED

One of the most popular trails in Olympic National Park, the hall of mosses … END_OF_DOCUMENT_TOKEN_TO_BE_REPLACED