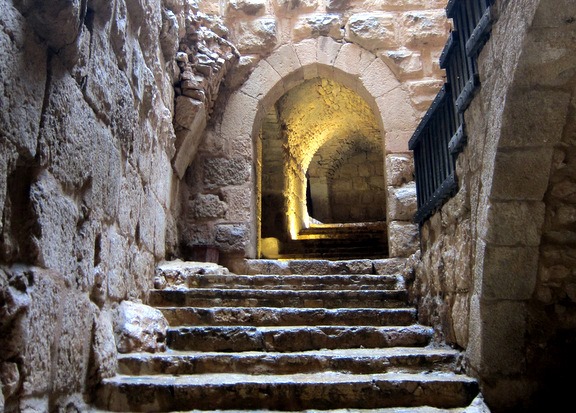 I walked outside my apartment in the morning, fresh trash strewn on the street in front of my building.  The sun was shining and it was already warming up nicely as spring was starting really show itself here in Jordan. I was feeling a bit weighed down by my coat as obviously the weather was only going to get warmer as the day rolled on.

As at this point I was in Jordan for nearly 5 months my knowledge of the local transportation system was greatly increased and I no longer hired taxis to take me to tourist destinations like I did my first few weeks in town.  So we all met up at the north bus station and crammed into a shared van for about one and a half JD a head. The town of Ajloun lies 80KM northwest of Amman and contains a beautiful forest reserve and ancient crusade era castle.  The castle, built in the 12th century was constructed specifically to protect the lands for the continual influx of crusader forces arriving from Europe.   The castle was struck with two earthquakes in the 19th and 20th centuries that damaged large areas of the castle and the government is trying to restore and preserve this historic castle.

The town of Ajloun is your typical Jordanian outlier village, busy, dusty, crowded.  It seems to have aged faster than the actual age of the buildings probably air, perhaps from the dusty desert winds, or perhaps from other environmental factors.  You can see the buildings, haphazardly built on top of their predecessors.  It is both simultaneously repulsing and compelling a flood of smells and sights that pulls together the historical as well as the still lived in feeling of the place.

We were famished and wandered through the center of the city. It was bustling this time of day but still early for lunch so we located a large building, probably the largest restaurant in the area and wandered over to get a quick bite before trekking up to the castle looming on the hill.

Weather or not you are ready

They sat us in the back annex, in the corner upon standard plastic tables and chairs.  The only other diners this morning were a couple of Jordanian men sitting in the corner smoking hookah and sampling hummus while discussing the daily politics.  It wasn’t soon after we ordered that the weather shifted and the clouds poured rain.

A few expletive either left my mouth or I was thinking them loudly.  We tried to wait out the rain.  Moving the plates of food around the table to avoid the leaky roof, and ordering tea and hookah to delay our departure into the town.  But the weather showed no signs of letting up and we didn’t have any intention of wasting our entire day huddled in the restaurant.

The temperature had sunk and I was the woefully unprepared for the weather.  The former boy scout in me was furious.  I felt terrible not just for the weather but also for my friends who offered to help me find a jumper or something to wear so I didn’t freeze on this trip.

Wading into the Market

The area of Ajloun is very hilly and at the bottom of all those hills lies the market. It’s makeshift stores huddled around the center of town.  It didn’t take long before the area flooded and the market ground turned to mud. We waded through the soupy brown water as we checked various shops for any clothing.

Nothing….sigh.  And it was just getting colder and ummm….wetter.  I wish I had the foresight to take photographs, but I was too cold and wet to care.  I was even ready to buy a woman’s coat or sweater if we could have found something that was in my color…err…I mean size.

We finally spotted a men’s store, and were a bit hopeful.  In a sort of odd situation, I ended up translating for –N- who was asking the employees for the clothing I was looking for.  They had nothing, perhaps short of a few expensive suits and dress shirts.  We asked a few locals in the souk and they seemed to say nothing was available due to summer approaching.  Sigh… I was disappointed and just decided to return to sucking it up.

It is at those moments when you give up that you always find what you are looking for.  On exiting the market out of the corner of my eye I spotted a few coats hanging up in a little shop in the corner.  It was a used clothing shop that had a few coats for sale.  Success!  I didn’t really think much if they were clean or not, I was freezing cold, but I found a fairly decent shape White Sox coat that fit well enough for the day, for a bargain price of 3 JD (5 USD).

Should we even bother staying?

We were all pretty well soaked at this point and miserable. None of us really wanted to do much except run home and hide in our respective beds.  But we had come this far and dammit we were going to see something. One of my travel partners negotiated with a taxi driver and we found someone willing to take us up to the castle and wait for us for a few minutes while we looked around.  So there we had it, 15 minutes to go explore the castle we had come all this way to see. 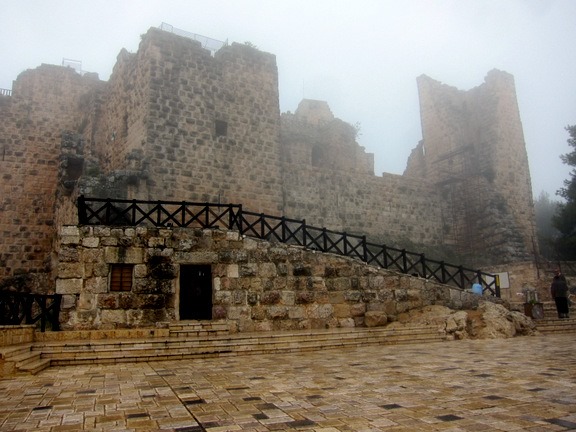 The castle is impressive, even enveloped in the fog.  As we approached we could see parts of it slowly coming into view, as if it was just revealing itself to us slowly.  The nice part about today is that it was pretty devoid of tourists as well. 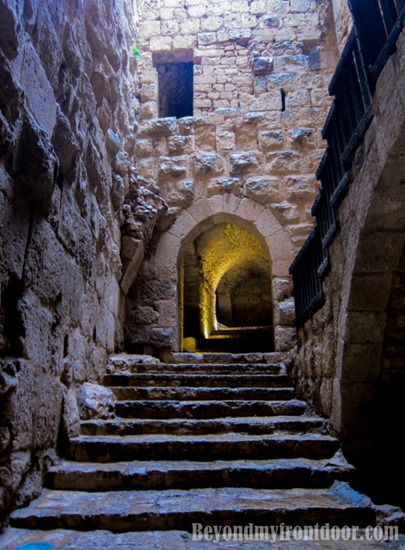 We didn’t have much time to explore unfortunately and we ran around it.  They say though it’s more about the journey instead of the destination.  Even if the journey is one wet mess of a trip. 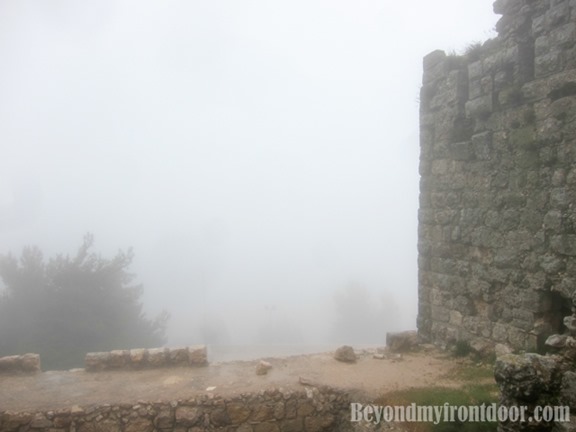 They also say that on an excellent day you can see into Palestine.  Even perhaps on a good day you can still see very far into the distance.  I wonder what they would consider a day where you cannot see the edge of the castle walls? 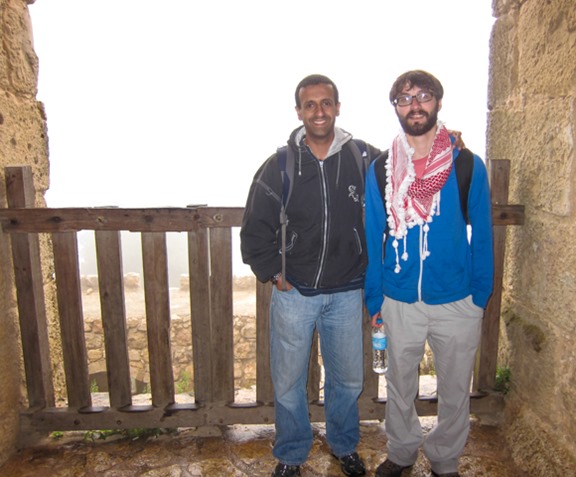 But thankfully we are all pretty seasoned travelers.  Even me, who’s former boy scout self is cursing for being so unprepared on this seemingly easy trip to a nearby town. But we did make sure to smile and pose to show everyone the great views here in Jordan 🙂  And I got to show off my new threads as well. 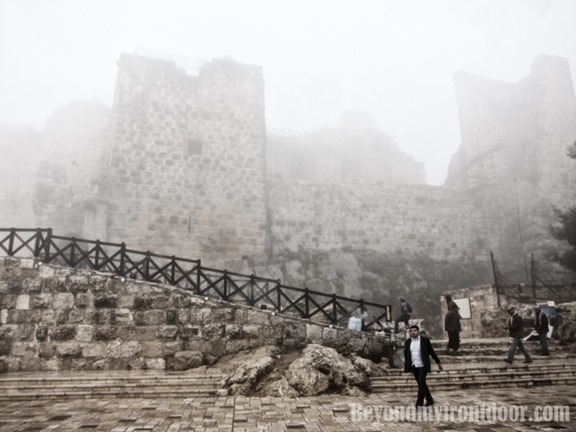 If you’ve been to this lovely castle and city and hopefully have a few photos, I would love to see and hear about your trip.  Maybe I can travel vicariously through you.