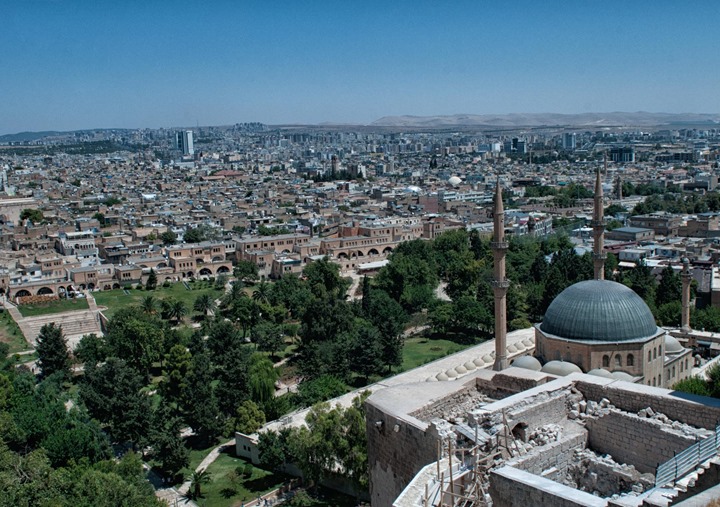 Şanlıurfa or Urfa for short is one of those places that seems to defy logic, somewhere so old that really there don’t exist accounts of places before Urfa probably existed.  It’s name has changed over the time but it is believed for instance as the birthplace of the prophet Abraham and prophet Job, and there are ruins nearby that are believed to be the oldest temple ever discovered in the world.

Yes it is that old.

We arrived here from our trip to Nemrut on one of those little minibuses that make up the majority of public transportation in Turkey.  My Turkish thus far has consisted of Otogar which is the word for bus station and one of the few that I’ve been able utilize to get my bearings straight.  My friend thankfully has been able to employ more words after 6 months living in the country.

Either way as we discovered eastern Turkey is a far cry from the west and English is a more difficult commodity to find.  I’ve been lucky that some of my Arabic studies has come in handy due to the close proximity of the lands to Arabia and the large number or refugees that sadly wait, unknowing if and when they ‘d ever be able to return home.

The main tourist site was a large park consisting of a mosque, Balıklı göl, a large castle, as well as a few pools and restaurants.  Balıklı göl one of the main highlights is the place where prophet Abraham is believed to have been thrown into the fire, but the fire was turned to water and the coals to fish.

The large pool here is believed to be that very pool and according to local customs the fish cannot be eaten.  In the same complex exists a mosque as well as other information areas.  The place was crawling with tourists, probably the busiest place I’ve seen in all of eastern Turkey yet, and nearly all of them appeared to be Turkish.

Beyond that in one corner of a pool was a small cave, that we could barely make out by sight but was supposedly the cave that was the birthplace of the prophet.

How does anyone really know?  You do have to wonder, how much is truth and how much is legend.   There is some doubt if this is the place where the prophet was born, however many accounts trace it to somewhere in this region based on other biblical and historical cities, so it is likely although not definitively proven.

There doesn’t seem to be a step in this country where I’m just floored by the sheer age and immensity of the history.  Even tiny little towns will have some old aqueduct or ancient ruin and often it won’t make a tourist map since you would otherwise have to include nearly every town in the country. 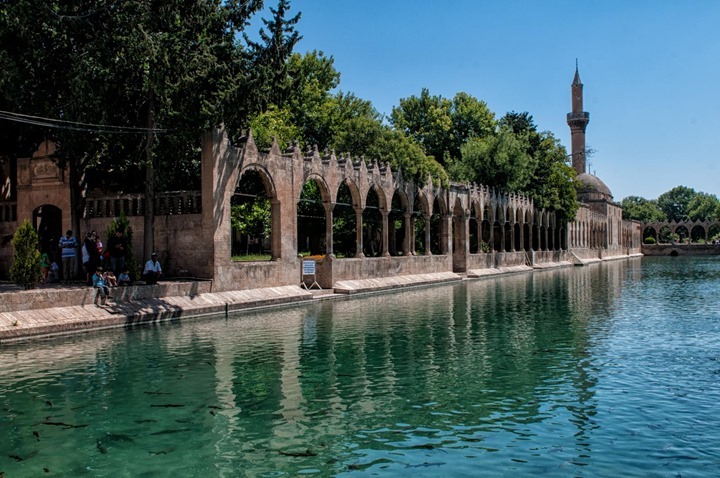 One of the more interesting sites in this area, the large complex of Balıklı göl, the large pool in the photo above.  If legends hold true, Nimrod threw prophet Abraham into the fire but instead of being burned the fire was turned to water.  This was a show of God’s power and the protection afforded to his prophets.  Throughout the entire complex families are seen photographing, picnicking, and feeding the masses of fish that swam throughout the large pools.  There were several areas that are now mosques where visitors can pray and rest.  There were a few informational areas in here as well but mostly all just in Turkish.

I’m also pretty sure swimming is prohibited and probably the fastest way to an international incident.  It’d at least be the quickest way to learn a few Turkish curse words!

The entire area around Balıklı göl is basically a tourist location.  You can see a small lake nearby believed to be adjacent to a small cave where Abraham is purported to have been born.  Is that true?  Well that is up to debate.  Likely he was born in present day Iraq where the Biblical city of Ur is supposed to have been located.  Yeah so OK a distance that is not just around the corner.  Just don’t go around telling the Turks here that. 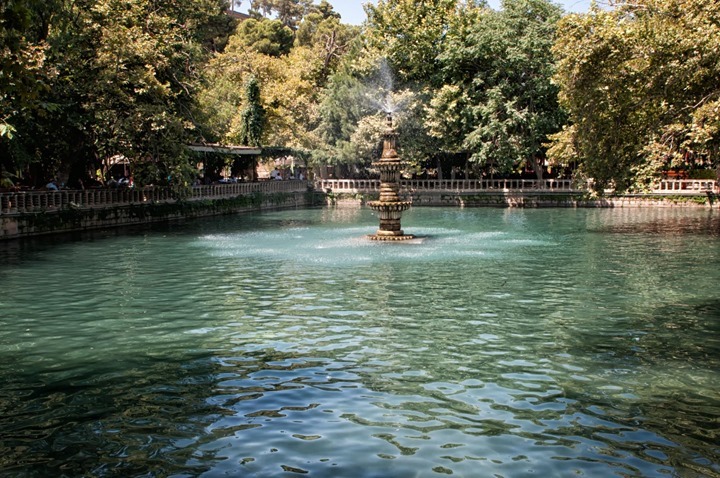 Either way it is a nice lake and a lovely place that is the location of various cafes and families enjoying a sunny warm day in the town.  We couldn’t quite get into the scene of the families having a day out but it was nice getting the chance to see how the locals enjoy their lazy days off. 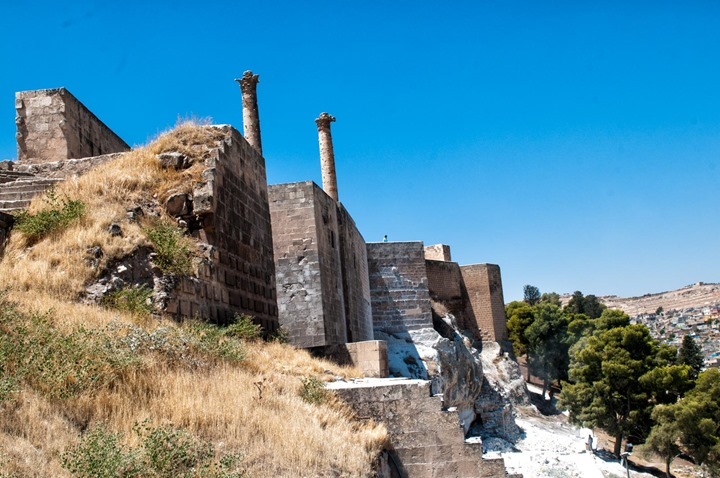 Built centuries ago, the castle dominates over the city and this area of exploration.  The walls date back to the time of the Abbasid Caliphate and the present walls and castle are believed to be built in the early 9th century.  However there is belief that some sort of castle or fortification existed here long before that.

The external walls look intimidating and well preserved.  They appear to be reconstructed at least more recently than its original construction and you could see workers in the area still working to maintain and fortify the castle.  This made us want to go and see more of this wonderful castle and the views over the city below

Getting into the castle is not straightforward as there is small pathways that seem to lead you around the castle more than into it.  You need to follow the fences to try to find the path into the actual castle itself.  There were a lot of folks confused (ourselves included) and we needed to ask a few folks to get back on the right path.

The castle itself sadly is not as built up as hoped. 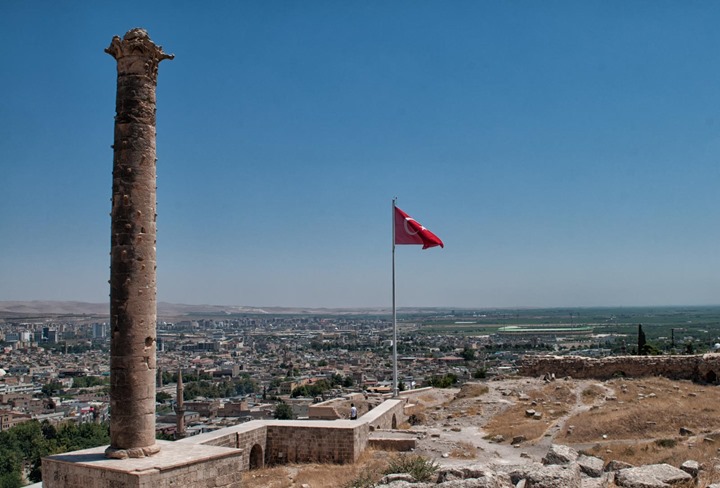 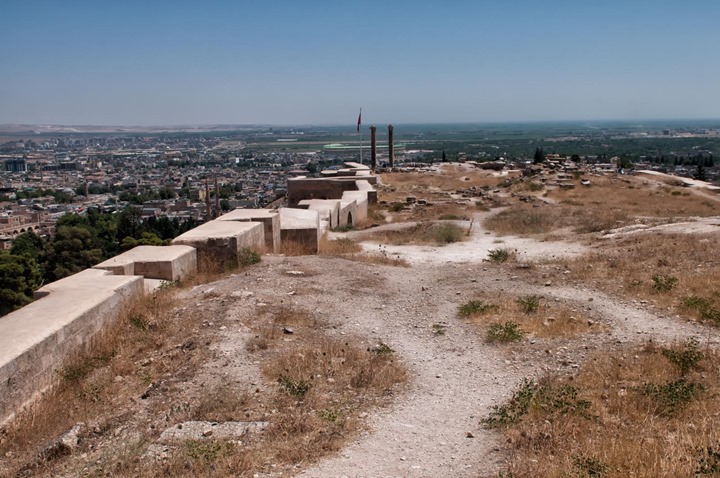 There are some columns (with no information around them) and lots and lots of dirt.  There is also a tunnel that leads you back out of the castle to the town below.  And really not much else.  Quite, quite a disappointment, especially when you consider how nice the external walls look.  However the view from the castle is definitely worth the trek up there. 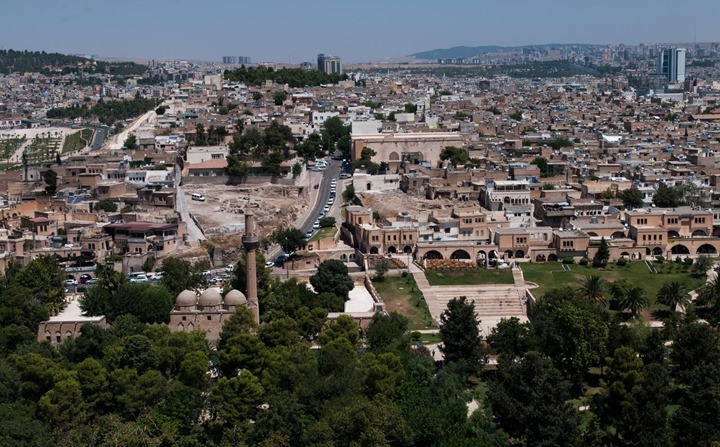 Beyond the castle itself we decided to try to head out of the main area to what was considered the oldest temple in the world.  Like good travelers we found a taxi, negotiated using the meter for the several kilometer journey and made our way off to the temple 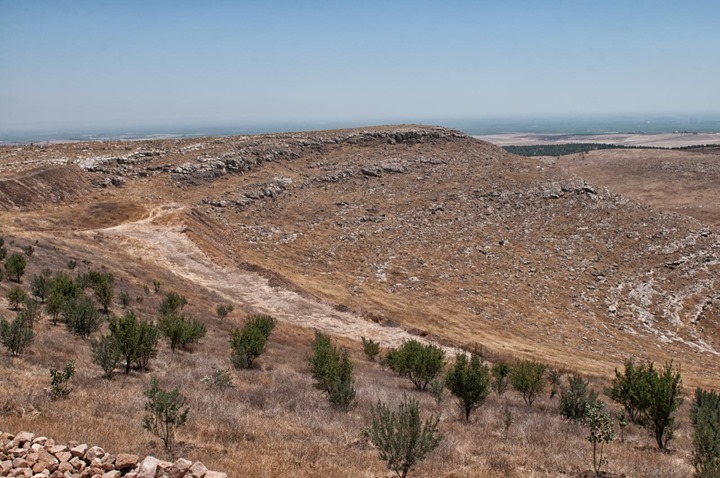 The area where the temple is located seems to be desolate.  How in the world did they find this temple or know to even look here.  And what a find it is.

Gobekli Tepe is believed to date back to nearly 11,000 years.  Let that sink in a bit…11,0000 years.  If true it may in fact be the oldest temple in the world.  Or at least currently the oldest place found to be about worship.  This age makes Stonehenge look downright modern!  (Stonehenge is probably about 6,000 years younger or so).

The site itself is an active archaeology site so a lot of it is not accessible to visitors.  It is also strangely nearly empty, with only a few other folks wandering around as well.  Probably with the location outside the main city and difficult to get to (without a vehicle) makes it a site few people manage to visit. 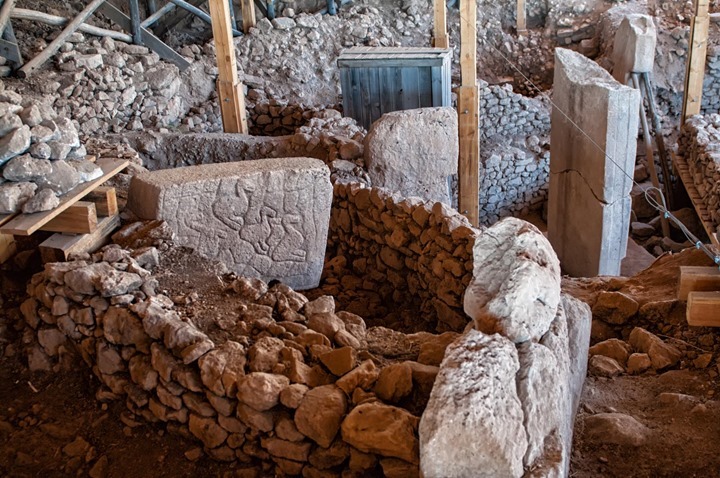 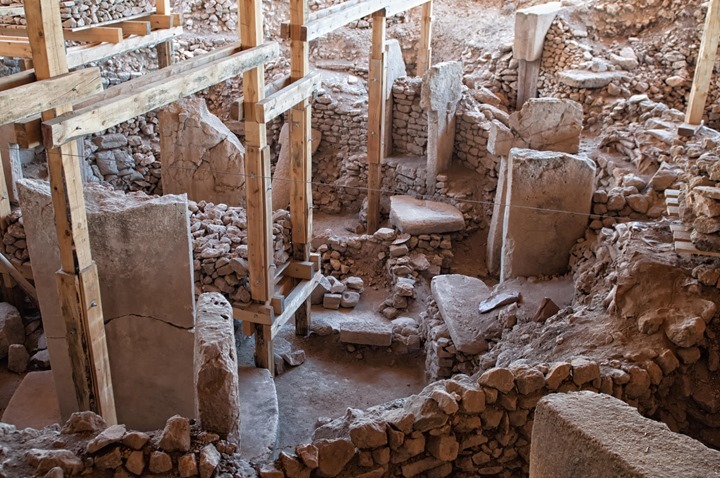 What are those on the top tablets?  I was trying to figure out what sort of animals they might be.  Heck, they sorta look like dinosaurs!  I didn’t know the temple was that old! 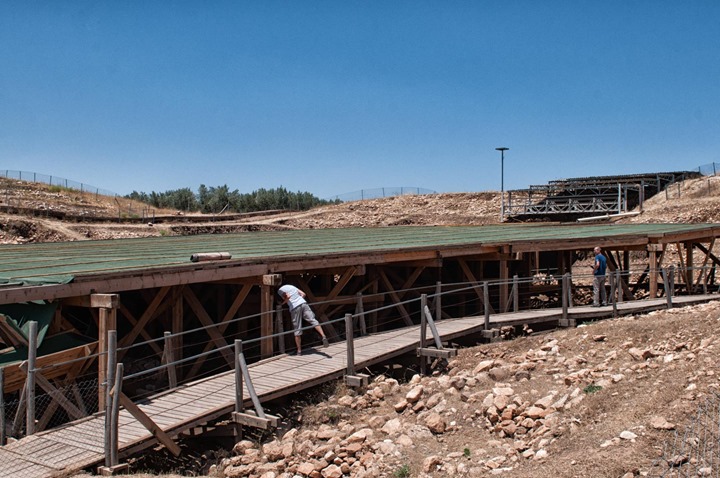 The area has several different dig sites that the visitor can see.  In general, though there is not much to see beyond a few of the tablets and some of the explanations written on some of the signs about the excavation sites.  Not much is actually known about the sites beyond just some general thoughts on the age of the location.  I suppose with something this old and this far out from a lot of built up areas, perhaps it will be difficult to know much of anything beyond speculation what the site was for.

You do have to wonder what ever became of the people who built and lived at this site.e  Did they abandon the area for other places over generations.  Did war destroy them?  I hate to speculate, but it makes my mind wonder about what the possibilities could be. 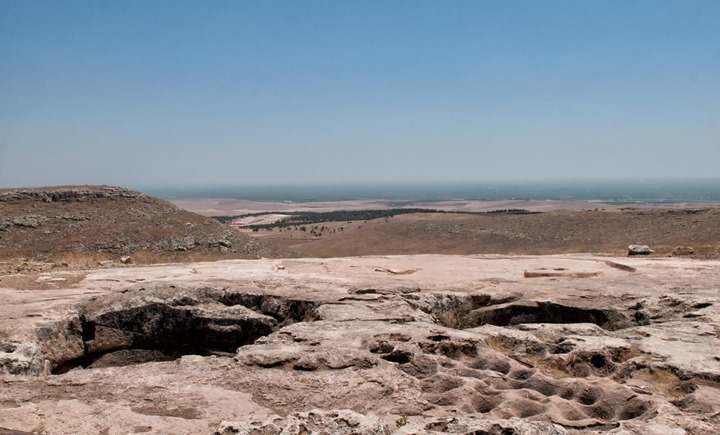 We didn’t spend much time at the site as there isn’t too much to actually see and decided to head back to the bus station to make our way back towards Gaziantep.  My friend needed to catch a flight back to Istanbul to start work and I needed to meet a friend and then plan my next several days exploring the Eastern and Central Turkey.

We started heading back down some country road I recall seeing a praying mantis sitting on the hood of the car.  Our taxi driver tried to kill it and I was trying to get him to not do so.  I was relieved when it took flight as he turned on the windshield wipers and witnessed a bird catch it mid-flight.  Whelp…circle of life and all that.

Surprise though even though our time was short the meter price had jumped significantly.  More so than even if you just drove for all that time.  Damn us for not being smarter negotiators.  Rookie mistake and all that.  But trying to cobble together 150 Lira (about 75 dollars) for a quick trip seemed insane!  Oh well, you live you learn, and when you travel you more often than not find a way to get screwed.  Sad though to have a bad taste in one’s mouth after a good trip through Urfa.

Patterson, NJ I had no idea of its place in American History. Founded by … END_OF_DOCUMENT_TOKEN_TO_BE_REPLACED