As part of my quest to really start to explore the areas around where I live and to keep up with the travel bug, I decided to check out the Travel and Adventure Show this past weekend in Washington DC.

The Travel and Adventure show is an annual show that showcases travel companies and destinations in several US cities (Atlanta, Dallas, Chicago, San Francisco, Los Angeles, and Washington DC).  I had never heard of the show probably since I’m not a travel profession, (I’m just a professional that travels), but I saw several groupon and google offer deals related to tickets here.  Of course I completely forgot about all those and a few days before the show when I was curious about going there was an offer for free tickets, which was totally in my price range.

The show as actually quite large in size, there were vendors, tour operators, adventure companies, tourism bureaus from all areas of the world.  I was really impressed.  I didn’t expect there to be as many as there were here, especially a lot of the tourism boards.  Many of them were actually directly from the country they were promotion (and not just local support staff or affiliated companies).  There were also a lot of local places too which I expected and was happy to see as I still know very little about the areas around where I live currently.

They had a cultural stage with dancing from various different countries.  They were mostly younger kids from local areas it seems and not professional companies.  It was really impressive to see the dancing and professionalism of these youths showcasing their family cultures.

They had a speakers area too.  There were several different speakers throughout the day.  One of the highlight speakers was Samantha Brown from the Travel Channel.  I never really watched her much, but at least now I know what she’s been up to these days.

I spent a lot of time wandering through to the different booths talking to the folks.  Many of them were tour operators trying to push their wares, of which I found a few interesting like polar and Antarctic expeditions.  The tourism boards I found much more interesting.  While many were trying to support certain tour operators they were glad to talk about just general travel to the regions, even independently.  Found a lot of places I definitely want to visit in the near future including the Azores, Malta, and Borneo. 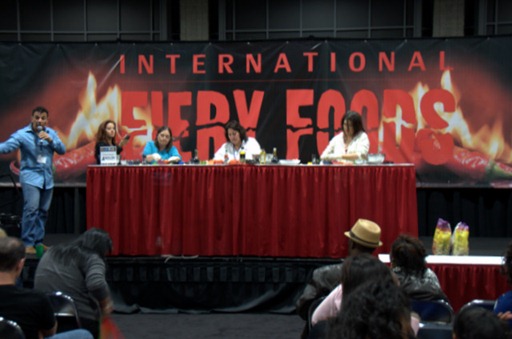 They had a few other demonstration, a cooking area with “fiery foods” and a few other slide show areas.  These were generally less impressive.  I didn’t really see much going on in the culinary demonstration area, even when they had activities going on.

They also had a few hands on activities like pool diving instruction.

A climbing wall and a zip line as well.  There were a few video games spread around the areas too.  There didn’t seem to be many people trying to use many of these (except for the climbing wall).

I may have brought back a bit too much reading material!  Honestly it was a nice place to wander around for a bit and chat with the different folks and find places to dream about.  I find it unlikely I will really use many of the tours offered here in the facility as I tend to prefer to travel cheaply and independently.  Getting info from and talking to members of the tourism boards was definitely worthwhile.  Overall it was especially nice give that I was able to get into the show for free.

Bonus though I decided to go and check out some of the cherry blossoms here in Washington DC that is such an amazing part of spring here.  I was figuring it would still be early (so I really didn’t plan equipment or time wise), and was shocked to see how far along the blooms were.

The cherry blossom festival here in DC runs from March 20th – April 27th, and I hope some of the blossoms still remain during those dates given how early the bloom was this year.  Blossom generally last about 2 weeks in total.  This is also the 100th anniversary of the cherry trees here in Washington DC so if you have the chance to visit this will be the year.  Just make sure you do it soon!

An old city injury requires an old city solution. Or at least that sounds … END_OF_DOCUMENT_TOKEN_TO_BE_REPLACED