The lighthouse at the end of the world.

Well..at least at the end of America. Especially as you can see islands marking Canada just over the narrows.

My friend with me has the goal of going to the most extreme locations of any place such as the most northern point. In this case, West Quoddy Head lighthouse lies at the most eastern point of the United States. Our Google Maps even showed us changing time zones to the Atlantic Time Zone when we crossed over to the area close to the Lighthouse.

It is also one of the most famous red and white lighthouses in Maine and the United States.

Fun Fact. The Red and White lighthouse design of this tower is the only “candy striped” lighthouse in the United States.

The lighthouse is automated these days and operational 24/7. It is maintained by the US Coast Guard.

The lighthouse grounds are open daily, although the visitor’s center does close at 4:30. (You can still walk around the grounds).

Tours of the top of the tower are Saturdays during July and August.

The lighthouse itself has a few posts and plaques marking the location and some other information about the lighthouse. Additionally there are a few trails that offshoot from the parking lot and lighthouse area to get views along the cliffs of the water and Canada in the distance. You can get some great views of the Quoddy Narrows, Bay of Fundy, and Campobello Island.

The Visitor Center is open from Memorial Day for the tourist season.

Is there an East Quoddy Head Lighthouse? 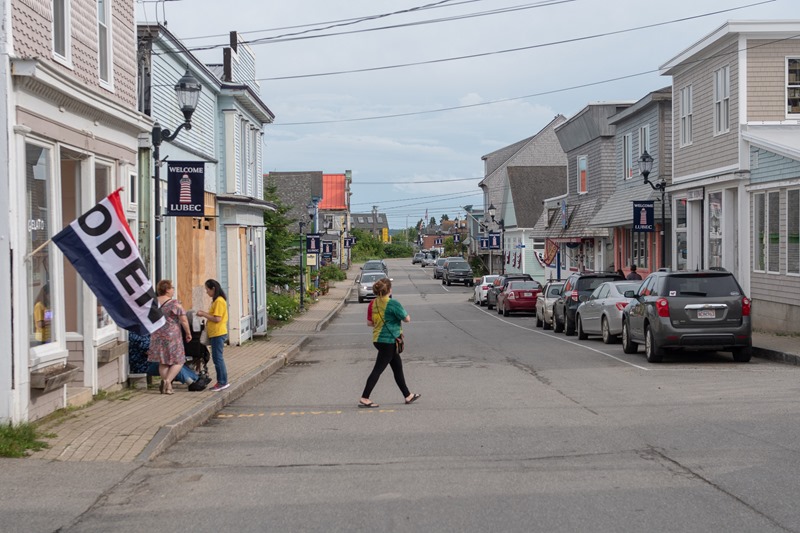 The small town of Lubec Maine is actually a cute little town to stop for a bit, grab some food, or even some souvenirs. We ended up eating here during our stop at West Quoddy Head, just a stone’s throw away from the border to Canada. Sadly we couldn’t cross because my friend had forgotten to bring his passport with him.

We ended up eating at Frank’s Dockside Restaurant, which had a beautiful view of the water. The food overall was good as well. Lots of seafood.

Hotel in Lubec are a bit sparse compared to some larger neighbors more inland. However Lubec is a good stop especially if you are staying the night before heading into Canada or other locations further abound (Its a bit of a drive from major cities in Maine as well).

Getting to West Quoddy Head Lighthouse

West Quoddy Head is located at the eastern most point in the US. Getting here, you’ll need to have your own mode of transportation. The Lighthouse is located about 15 minutes outside of the main town of Lubec.

I'm a huge aviation lover, in particular anything that flies or goes into … END_OF_DOCUMENT_TOKEN_TO_BE_REPLACED

Kismet New York is the westernmost settlement on Fire Island, the 30 some … END_OF_DOCUMENT_TOKEN_TO_BE_REPLACED