The Desert Castles and Eastern Desert was one of my most memorable trips I had taken during my stay in Jordan.  It felt very remote, very beautiful in the stark landscape of the region.  When we went we had no idea what we were doing, and we had prepared as best as we could through research, instinct, and dumb luck.  Hopefully these tips help you in your planning as well. 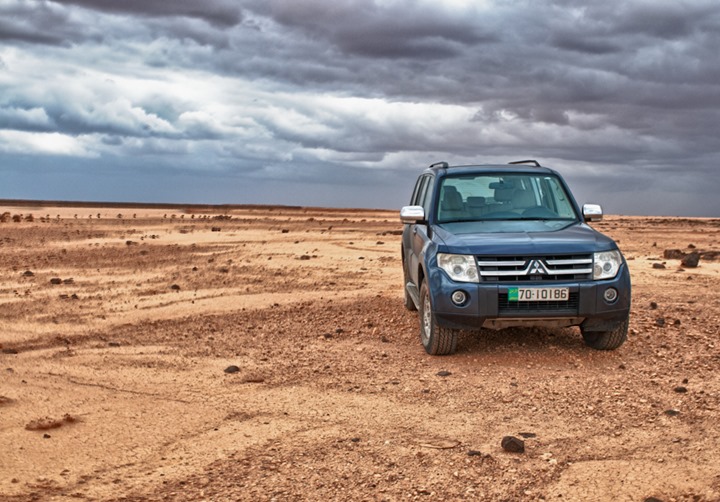 You need a car

You know there are tours of the Eastern Desert but basically all of those only hit a few of the places around Azraq.  Which I won’t deny are worth seeing, but if you want to go and see a lot of the interesting sights out here you will need your own car.  Several of the places have no or very little public transportation.  For instance while it is possible to see Umm Al-Jimaal by public transportation, the amount of time you will spend doing so will spend nearly your entire day just seeing this one place.  And even then there are no guarantees the buses will run when they say they do.  Check out my post on tips for renting cars in Jordan for info on where and how to get a car if you want to explore on your own.  Also consider a 4WD vehicle for some of the out of the way places.  Places like Qasr Burqu I think could be done without 4WD but you would need at least a car with high clearance.  Although I’d rather go with 4WD to be safe anyway.

Distances between places is quite far in the Eastern Desert.  If you head out to Qasr Burqu it is over 3 hours from Amman and more like 4.  From Azraq it is about 1.5 – 2 hours each way.  Umm Al-Jimaal (mother of camels) is another 1.5 hr distance from Azraq in the opposite direction.  And if you are spending the night you are likely going to be back in Azraq as it has the only hotels in the area.  So plan accordingly and plan to have enough time.

Always get gas when you can

Taking a cue from the above reason, you will notice quickly that with the long distances there really is not much out here between places.  For that reason make sure you get gas any time you see it.  You will find as you leave town again you may not see another gas station for 100 or more kilometers.  So don’t get stranded.  Luckily a lot of the roads out here do have a lot of traffic (trucks going between Iraq/Saudi and Jordan) so at least if you are stranded you probably won’t be completely alone thankfully.  But if you get stuck out in the desert, well that could be a completely different story.

This is probably good advice for any road trip.  One of the few places to eat and stock up also happens to be Azraq.  I would recommend eating there if you want, the food was good at the places we ate and was reasonably priced too.  However when you are driving about you should have some provisions on you as well.  While you hope you won’t get stuck, things do happen and even if you are just wandering around exploring making sure you have enough water is key.  We were lucky that the weather was really mild when we were out in the desert but you can generally expect high temperatures outside of the winter months.  Better safe than sorry.

This was a huge advantage to have in the area, especially for the GPS.  Sure a regular GPS would help in some cases, but I cannot stress how useful having google maps and search capabilities was when traveling through this area.  Believe it or not, Qasr Burqu actually shows up on Google maps and pretty accurately.  This is how we ended up finding the place to be honest.  Also having GPS and a smart phone lets you search for places and also have your bearings in case you do get lost a bit out in the open desert.  It is a lot easier to lose your bearings out there.

Spend more than a day

You know everyone I had met wanted to go see the Eastern Desert, but they only seemed to care enough to spend a day.  Don’t.  Sadly the destinations are huge between places and you really need time even just to get there.  Some of my favorite places including Umm Al-Jimaal and Qasr Burqu were not at all close to each other.  Having seen them now I would have regretted not really spending enough time.  I only wish I could have spent a third day in the region but I did still manage to see most of the “big sights” although we had to rush a lot.  There were still things out there to explore if we had more time to just go and wander and see where it has been.

So you decided to extend your time in the Eastern Desert?  Ok so where to stay then?  Well there are places to stay out in the Eastern Desert region in the town of Azraq.  Actually three. If you can afford it, the Azraq Lodge is probably the best of the ones to stay at.  It is a former British Military hospital that was turned into an eco lodge by The Royal Society for the Conservation of Nature. It is beautiful and it has a popular dinner buffet each night.  If you are budget minded you can do what we did and stay at Hotel Zubi which is located in town.  It does not have a website to book so you need to either call ahead (although their phone was not working when we tried last time) or show up in person like we did.  There is a third option Azraq hotel that is a bit between those two in amenities and price.

Want more info on visiting the Eastern Desert?  Check out my posts from my travels there for inspiration, advice, and humor

For those Visiting Page AZ and Looking for Things to Do, we look to break … END_OF_DOCUMENT_TOKEN_TO_BE_REPLACED

Did you know Ohio's Place in Aviation History? The Dayton Aviation Heritage … END_OF_DOCUMENT_TOKEN_TO_BE_REPLACED